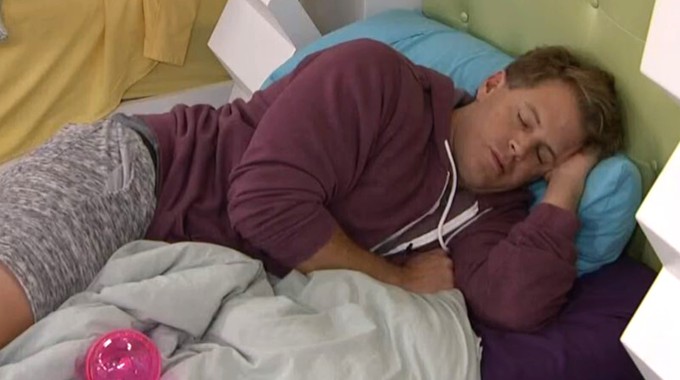 After a very busy night with the first Triple Eviction the Big Brother 22 HGs had one more HOH competition and after that winner was crowned it was time for HGs to start plotting the next target and their final moves in the last weeks of the season.

Late overnight the new HOH set his plans for nominations and how to handle the reaction when the target is revealed. Only six Houseguests remain at this point so someone has to go and with so few options left it’ll just get harder to make sure nothing strays from that path.

10:14 PM BBT – Tyler says he’s grateful Cody won [HOH]. Tyler tells Enzo that he voted out Nicole because he thought that was the plan. Enzo says he voted out David to do what Memphis wanted.

10:55 PM BBT – Christmas is claiming viewers will be making opinions based on just seeing part of what really happened this season.

11:07 PM BBT – Nicole is upset and tells Cody that Christmas is evil because she tried to vote her out. She tells him she was good friends with Dani before the season. Cody says he thought so and that’s why he wanted Dani out.

11:10 PM BBT – Cody confirms to Nicole he plans to nominate Tyler and Christmas.

11:12 PM BBT – Tyler and Memphis receive their HOH baskets. They read their letters to the HGs.

11:55 PM BBT – Memphis and Enzo discuss needing to secure the Veto so they can make sure Christmas goes this round.

12:20 AM BBT – Nicole has been named the sole HN of the week as selected by Enzo, the outgoing HN (David, the other HN, was evicted). Nicole is stressed to be sleeping alone in the room. HGs offer to take turns staying with her.

12:30 AM BBT – Nicole worries to Cody that she’ll be too weak for the Veto comp and she doesn’t know why Enzo would have picked her.

12:40 AM BBT – Nicole told Cody she had hoped to win HOH so she could nominate Christmas and Tyler.

12:50 AM BBT – Enzo joins Nicole and Cody. He says it’s three against three now. Cody says his plan is to get Christmas out then go after Tyler next. Enzo says he’s just discovering that Christmas and Tyler are so close. Cody suggests they need to target whoever they’ll be able to more easily beat in comps.

1:55 AM BBT – Christmas is staying in the HN room to keep Nicole company tonight.

2:10 AM BBT – Enzo is upstairs talking with Cody about their plans moving forward. Cody is glad Enzo didn’t vote Nicole out and says she would never put him on the Block. Cody says it was good to break up Dani and Nicole because they were friends outside the house. Enzo feels Memphis proved himself to them and says he (M) wants Tyler out.

2:15 AM BBT – Cody and Enzo worry that Memphis won’t take it well when they reveal Christmas to be the target this week. Enzo says Tyler was trying to get him to flip his vote to get out Nicole tonight. Cody says Tyler was lying about thinking the house had flipped to get her out over David.

2:20 AM BBT – Enzo thinks Memphis would nominate Tyler and Nicole if he wins HOH next.

2:30 AM BBT – Enzo says he threw the last HOH by getting the final question wrong. Cody is sorry he won because he was in a good position. He doesn’t like that Nicole isn’t winning anything.

2:50 AM BBT – Enzo wants to talk to Tyler tonight but Cody thinks he should have the talk first. Eventually Cody relents and agrees that Enzo will go to Tyler and say Cody was worried by the vote but that Tyler will be safe.

3:10 AM BBT – Cody stays awake after Enzo leaves and is listening to music.

So Christmas is the plan and that’s no big surprise but she may be tougher to beat in the Veto comp than some of the other recent targets. If she pulls off a win then will Tyler rise on the target list or could we get an unexpected swap? We’ll see in the next few days.