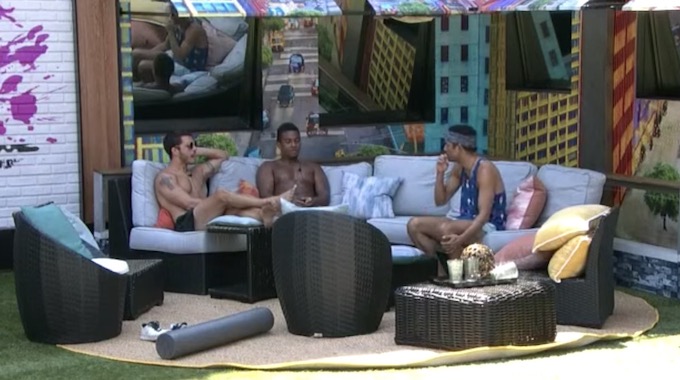 Slow day in the Big Brother 22 house and not much happening on the Big Brother live feeds. One nom has been staying to themself while the other one works on their campaign and made their rounds. Read on to get all the details.

9:15 AM BBT – Memphis and Christmas are talking about what could happen next week. Memphis says that he doesn’t know what Bay would do if she won and adds that Cody, Tyler, Nicole, and Dani are getting too comfortable hanging out with each other.

9:17 AM BBT – Memphis mentions that all it takes is for Bay and Day to win back to back HOHs to turn this house upside down. Christmas says and you can probably add David to that.

9:23 AM BBT – Christmas is rehearsing her eviciton night speech with Memphis.

10:05 AM BBT – Kevin talks about having a house meeting to work out a cleaning schedule.

10:35 AM BBT – Christmas tells Kevin that she is going to campaign because she hates when people assume they are safe. She says she is going to keep it clean and not attack him personally in her campaign.

10:38 AM BBT – Bay tells Ian that she is watching the other HGs and seeing where people move and who they talk to the most.

10:39 AM BBT – David comes out and joins Kevin and Christmas and Kevin excuses himself so they can talk.

10:40 AM BBT – Ian tells Bay that he thinks they are on the same page and should talk more often.

10:46 AM BBT – Christmas tells David that she thinks Enzo picked her because it ensures that Kaysar goes home. She adds that if Enzo also said that David’s name was brought up but Enzo didn’t go for it. Christmas says that if she stays and wins HOH, she will not target David because it doesn’t help her game at all.

10:47 AM BBT – Ian and Bay continue to compare notes on the alliances inside the house.

11:01 AM BBT – Ian asks Kevin if he can make sure that if Bay and Day make HOH that his name isn’t in their nomination set? Kevin says he will and asks if Ian can do the same for him with Nicole.

11:07 AM BBT – Ian tells Kevin that he thinks it might be a good idea for them to disassociate for a little bit because they have been talking a lot lately.

11:09 AM BBT – Cody asks Ian who he thinks are his biggest threats in the house and Ian tells him that Bay and Day. Cody asks if he would do that and Ian said he could and asks Cody if he could help him get HOH if it’s a knockout comp. Cody says that if it’s “you vs me, I got you.”

11:14 AM BBT – Cody asks how Ian’s relationship with David is and he says it’s good. Cody tells Ian that David kind of messed things up between him and Day. He explains to Ian what happened.

11:17 AM BBT – Ian tells Cody that he got unlucky with the bullhorn. Cody says it is what it is and he thinks that the most frustrating part of that is that now they can link him and Nicole together. Ian tells him he understands that because he got linked with her because they are both former winners. Ian and Cody agree that if Josh and Kaycee were both there Ian would be in a better position.

12:18 PM BBT – Bay asks Kaysar if he has information to blow Dani’s game up like he threatened to do. He said that he mostly did that to see Dani’s reaction and it worked. Bay tells him that her and her alliance is clear as day and her trying to mask it isn’t working.

12:28 PM BBT – Bayleigh says that she thinks that if he does something like that it will rattle some people to the core, like Nicole. Bay adds that as much as they want to think that next HOH will be the one that turns the house upside down, it could be another silent week. Kaysar says that it’s infuriating that they are going into week 5 and no big moves have happened.

12:32 PM BBT – Kaysar says that David is trying to show that he is loyal to Dani and her group. Bay asks if he can just blow up Dani’s game because she has been planting seeds.

12:40 PM BBT – Bay fills Day in on her conversation with Kaysar.

1:14 PM BBT – Christmas tells Kevin that she has her speech all ready to go and adds that she is going to have fun with it.

1:35 PM BBT – Cody tells Enzo that he played dumb when Day went to him and asked about Dani going after her.

1:38 PM BBT – Bay is retelling Day a conversation that happened between Tyler and Dani outside. Tyler and Dani had a conversation about Tyler and Bay’s altercation on their season. Dani didn’t see Bay sitting there listening and said something about how “that was game, not personal” and then added that Tyler “didn’t do anything and now they are all screwed.”

1:42 PM BBT – Day tells Bay that she is trying to make them explode and they don’t deserve it. Bay mentions that Kevin was there egging her on.

1:45 PM BBT – Bay talks about how Kevin is always asking Bay about the people that were into her before she got married and what kind of phases she went through before getting married. She adds that Kevin is always hitting on Swaggy on the feeds too. She says that’s disrepectful.

2:20 PM BBT – Bay is telling Enzo about Dani’s conversation with Tyler. They wonder why she keeps bringing that up. Enzo says that she is trying to find cracks. Bay then tells Enzo that Kevin came to her and told her that he owed her because he vouched for her with Tyler. Bay says she doesn’t owe him anything.

2:33 PM BBT – Bay and Christmas are talking about how Kaysar goes from being good one second to being in a deep dark hole the next. They both make it a point to check on him from time to time.

2:50 PM BBT – Christmas tells Enzo that she is campaigning and checking off all the boxes.

3:00 PM BBT – Christmas is rehearsing her eviction night speech which is to the tune of Twas the Night Before Christmas.

Dani isn’t making her game any easier, that’s for sure. With Bay overhearing her conversation with Tyler and Kevin out in the yard, Dani is definitely on her radar. Anyone hoping for a Bayleigh HOH on Thursday just to see a shakeup?