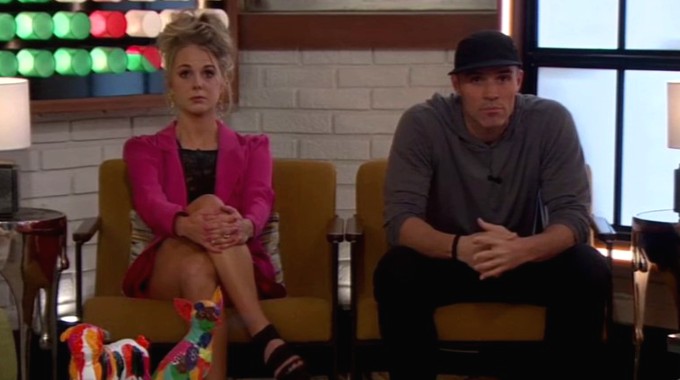 After a season-long run of expecting the expected on Big Brother 22 we finally got ourselves a good ol’ fashioned blindside. Yes, Cody pulled the rug out from under his close ally Nicole and it sent shockwaves through the last hour of the season finale. So how did the Final 3 handle the fallout and what else might have happened? Read on for the F3’s comments coming in from post-show interviews.

When Cody won Round 3 of the final HOH he was presented with the biggest decision of his season and a potential repeat confrontation of his BB16 experience: make the wrong cut and lose $500K. Ultimately he went with keeping Enzo and evicting Nicole, a move that solidified his already seemingly certain win. So how did that all go down? Well those tears we saw from Nicole before his decision was announced weren’t from fearing the worst, it was knowing it. From EW.com:

EW: I just spoke to her and she said that you gave her the heads up right before the vote. You didn’t want to blindside her. You were emotional, and she was extremely emotional. She’s still very emotional about it.

Cody: Once I won [R3], I knew kind of where I was leaning and I could barely even look at her. It was so tough for me to even like make eye contact with her because cutting her felt like I was cutting a sister and it was just so difficult.

So that explains a lot about why Nicole was so upset during her F3 eviction speech plea. I thought she had immediately feared eviction because she had planned to make the same move and cut Cody, therefore expecting him to make the same move against her. Nope, he had already told her during the commercial break because he didn’t want her to be completely blindsided on national television.

Outfront with Julie, Nicole told her this was the first thing of the season that she hadn’t seen coming and frankly, she’s right! I didn’t think for a moment that Cody would cut Nicole. He should have 100%, but I just didn’t see him doing it. I think he would have won either way, but that was shocking.

Nicole explained a little more of how it went down, per EW.com:

EW: We were at a commercial break, so we didn’t see what happened, but did he tell you before he made the official announcement on TV?

So how did that impact the final vote? Nicole still voted for Cody, she didn’t let it stop her. During her questioning, she pushed Cody on why he would have done this to her and said she couldn’t even look at him. Had she voted against him then she would have been alone in her decision and that would have looked super bitter. But guess who just might have done that back to her?

EW: Let’s say that you hadn’t won that final HOH. Let’s say you got sent to the jury. Whom would you have voted for between Nicole and Enzo?

Cody: Oh, that’s such a difficult question because I’ve respected both of their games so much. It’s so hard for me to answer

EW: Well, the jury had to answer. Now so do you.

And as for Enzo, if Cody hadn’t kept him around, then he wouldn’t have been quite so gracious as Nicole with his Jury vote, again from EW:

EW: Well, Enzo told me you would have had his vote. He said if Cody had cut him, he would have voted for you.

Nicole: Oh, wow. That’s crazy. And I think I would have had some other people, just being a winner and getting there.

Enzo explained to EW.com why he would have voted bitter. Last time around he gave his vote to the HG who cut him and he’s regretted it since. Interesting reasoning here.

EW: Let’s play Big Brother What If the other way. Let’s say that Cody takes Nicole instead of you, and you’re sitting there on the jury. Whom are you voting for?

From my estimates, that vote wouldn’t have flipped the balance against Cody and Cody would have still had a strong victory over Nicole, but clearly, again Cody made the right choice in evicting Nicole from the F3. What’s your take on the F3 blindside eviction. Obviously, Cody made the strongest winning decision, but if he was going to win either way do you think he did the right thing? Share your thoughts below!