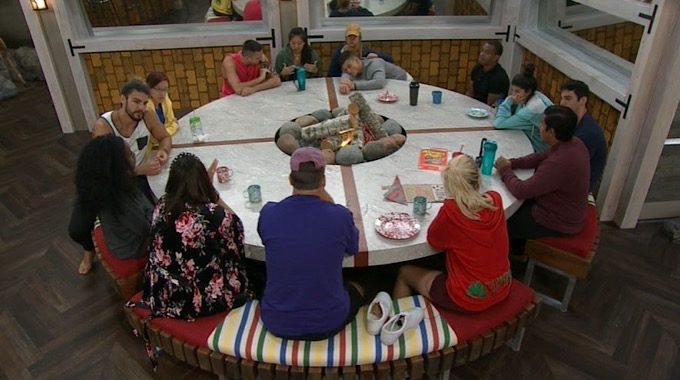 It was an early morning in the Big Brother 21 house with the HGs gearing up for the Whacktivity Comp and Noms coming up throughout the day. Jack made some rounds to fill people in on who he was going to be nominating and the HGs spent a lot of time speculating about what the Whacktivity Comp would have them do. Get all the details of Friday’s Big Brother live feeds below!

8:30 AM BBT – Tommy and Jack in the HOH room, they are both looking forward to playing in the Whacktivity Comp. Tommy tells Jack that he isn’t going to say anything about the Whacktivity come after it happens. He isn’t going to say whether he won it or not because he is terrible at lying to people. (Holly, Jack, Tommy, Michie, and Sam are playing). Jack mentions that everyone playing is in their alliance except for Sam.

8:55 AM BBT – Michie, Jack, Holly, and Christie are all talking in the bathroom about the Whacktivity Comp. The only thing they are worried about with this is if Sam wins it and goes rogue.

9:10 AM BBT – Christie and Tommy are talking in the archery room, they are talking about Jack taking her idea about the “no game talk.” She says that she is okay with it because then she won’t take the heat from it. They also talk about how big of a target Jack has on him because and now he is in a full-blown showmance which puts a bigger target on him. They also mention that someone is going to take a shot at him before they get to F8. They talk about Kemi and how if she wins the POV, she will win the HOH next week. Christie says she is “on fire” about this.

9:25 AM BBT – Christie and Jack are in the SR talking about his night with Tommy. Jack tells Christie that Tommy told him if he (T) won HOH that he would put up Nick and Sam. However, Tommy mentioned to him that it would have to be after Camp Comeback.

9:41 AM BBT – Tommy and Analyse are talking in the Boat Room, Tommy is telling Analyse that the only time a showmance is dangerous is if you make it known that the other person is your ride-or-die. If you are just exploring a connection, but play your own game then it’s not a big deal. The talk turns to Nick being scared of being in a showmance with Bella. Analyse says that even if she and Jack got really close, she came here to win and she will always put her game first.

9:53 AM BBT – Jack tells Kat that he isn’t putting her up and she is really excited about it. He tells her that he isn’t going to disclose who he is putting up, but wanted her to know she wasn’t going up. Then she asks “wait, are you backdooring me?” She says she is joking.

10:00 AM BBT – Tommy and Analyse are still talking in the Boat Room. They are talking about how Kat is a liability now that Michie broke things up with her and they are worried that Kat might buddy with Kemi. They also talk about how Nicole doesn’t really talk game with any of them.

10:43 AM BBT – Most of the HGs are sitting around the table wondering what the Whacktivity Comp is going to consist of. They think that it might be the same concept as the last one, but would have them eating disgusting things.

10:50 AM BBT – Jack tells Michie that he is going to tell Jess that she is a pawn this week.

11:10 PM BBT – Jack and Michie are talking to Cliff about putting Jess and Kemi up, Jess being a pawn. Cliff went to tell them about something that happened when Ovi and David went up to the room to listen to the HOH and the feeds went down for the Whacktivity Comp.

2:50 PM BBT – Feeds back up from the Whacktivity Comp. All the HGs are talking about the comp. Something having to do with a maze and snakes.

3:10 PM BBT – Nicole suspects the powers are related to the comp names. She guesses the Nightmare Power is because it’d be a nightmare for the HOH to pick new noms.

3:12 PM BBT – Bella doesn’t think Ovi has the power from last week or else he would have used it. She guesses Cliff.

3:15 PM BBT – Bella guessing that Tommy or Jack has the new power.

3:25 PM BBT – Ovi and Cliff agree that Kemi and probably Jessica will be nominated.

3:35 PM BBT – Jack says he did the Six Shooter alliance signs all over after he finished because he thought he won but says he didn’t win.

3:36 PM BBT – Bella questions Tommy about winning the power. He says he didn’t win it. Tommy suggests either Jackson or Sam got it.

3:55 PM BBT – Jackson promises Jack he didn’t win it and that he’d tell Jack if he had.

4:00 PM BBT – Jack questions Tommy but he denies winning. He suggests it’s most likely Sam but points out Holly said she didn’t have her glasses but he thinks she did.

4:17 PM BBT – Jack lets Kemi know she could be going up and says he thinks she’s a good person even if he does make that move.

4:45 PM BBT – Jack tells Jessica he wants her to be a pawn this week. He also says he heard there was an all-woman alliance. She denies it strongly.

5:10 PM BBT – Christie still believes it was Sam who won the comp.

5:20 PM BBT – Jess goes back to Nicole and shares that she will be going up and is upset that someone told Jack about the all-women alliance.

5:25 PM BBT – Bella tells Jack all about her alliance with her, Nicole, Kemi, and Jess. She even reveals its name, Black Widows. Bella says Jess started it.

5:45 PM BBT – David talks with Ovi about causing trouble since they’re basically already out of the game. Ovi says they’ve got nothing to lose.

5:55 PM BBT – Kat comforts Jess that she’s not the real target and how Jack wants Kemi out instead.

Another mystery power on Big Brother leading to paranoia and second-guessing. Good thing that’s a fun part of these things since we don’t seem to get to enjoy the power itself! Nominations are still coming up tonight and little mystery on that part of today’s game though. Jessica and Kemi are slated for the Block and we’ll have that confirmed tonight.