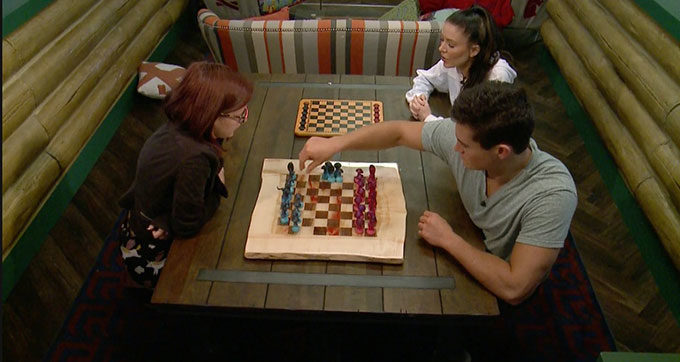 It was the last full day on the Big Brother 21 Live Feeds and it was as slow as you’d imagine. It’s hard to believe that it all ends tonight. Read on to find out what the Final 3 talked about in their final hours of this season.

2:23 PM BBT – Jackson mentions that they made an announcement at some point this morning that they were all one day closer to $500,000.

2:30 PM BBT – The HGs are wondering what time the finale is tomorrow night. Nicole thinks it starts at 9 PM but runs a half-hour later.

2:45 PM BBT – Nicole goes into the Storage Room and asks for her luggage so she can start packing.

5:38 PM BBT – Nicole is upset with herself for not winning Part 1 or Part 2. She says she wishes she’d have made it to the Final 3 with two people who weren’t such a “done deal” with who their Final 2 choice is. She says she has no one but herself to blame.

5: 50 PM BBT – Nicole is still really down on herself. She apologizes to her family for “failing.”

6:00 PM BBT – Jackson and Holly talk about whether or not Nicole is even going to campaign. They talk about how they should tell her that neither one of them will take her to the Final 2.

6:21 PM BBT – Jackson tells Holly he’s really scared of getting out of the house. He’s worried what everyone is going to think of him. Holly says he has her support.

6:28 PM BBT – Jackson says to Holly he’s terrified she will win. She says thanks and adds that she’s terrified that she has no shot.

6:42 PM BBT – Jackson once again asking Holly if she’s going to take Nicole over him. She says no way. She says that it would just look so bad on her to do that to him. Jackson says he would look at that as extremely personal and that would sever some things. Holly says likewise and asks him not to cut her also. He says it has never even crossed his mind.

7:32 PM BBT – Nicole asks what time they’re going to do their final Taco Tuesday. Nicole says she will chat with them both because tomorrow is the big day.

8:20 PM BBT – Nicole is busily packing and trying to figure out what she can fit in her bag to keep.

9:05 PM BBT – Jackson and Holly plan to keep Taco Tuesdays going after the season is over. They promise to call Nicole to make her part of it.

10:15 PM BBT – Jackson steps away so Nicole can campaign. She tells Holly she knows her and Jackson are together. Nicole says she doesn’t know how the jury will go and they could be influenced by competition record.

10:20 PM BBT – Holly has turned Nicole’s campaigning opportunity into a discussion about her pageant days.

10:25 PM BBT – Nicole asks Holly to consider taking her. Holly points out their games and comp records are too similar.

10:50 PM BBT – Nicole tells Jackson the Jury could look at comp record or social game to decide between him and Holly, or he could take her (N) and win for sure. Jackson says his decision will be made last minute.

11:30 PM BBT – Nicole is being not so subtle by discussing past F2’s where the R3 winner took the wrong person and lost (Cody, Paul, etc.)

11:35 PM BBT – Nicole suggests to Jackson he should think deeply about his reasoning for who he’d evict and who he’d keep since the Jury could ask him about that.

11:50 PM BBT – Nicole tells Holly she hopes she (H) wins R3 because she (N) has a better chance of getting to F2 with her instead of Jackson winning R3.

11:55 PM BBT – Nicolle recommends Holly to go with her gut just like during a DE.

12:10 AM BBT – Nicole realizes it’s after midnight and welcomes the other two to Finale Day.

1:10 AM BBT – Jackson tells Holly he’s considering Nicole in F2. Holly says she can’t come up with 5 votes for herself. Holly expects Nick and Christie have been campaigning against her in Jury.

Nicole didn’t give up on the last full day of Big Brother 21 and while her argument might be pretty good it doesn’t seem like Jackson or Holly are giving her serious consideration. Maybe we’ll get a surprise tonight but I wouldn’t expect it.