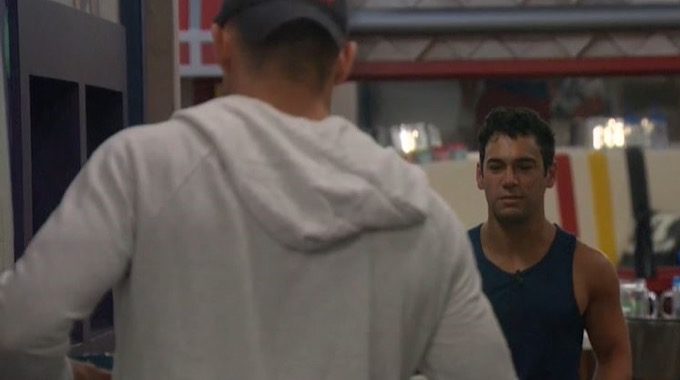 For someone who claims to be a Big Brother superfan and a regular feedster, Cliff clearly hasn’t caught on that cam talking behind closed doors is not a good idea. As we all know, the other day Cliff got caught cam talking by Christie and now he has gotten busted a second time by Jackson.

Jackson heard a brief tidbit yesterday on the Big Brother live feeds, but today, he got up and listened to Cliff cam talk for about 45 minutes! It all started at 7:25 AM BBT when Jackson got up, made a cup of coffee and stood by the door.

The first bit of game talk that Jackson overheard was Cliff talking about the cutting knife and Orwell disappearing. He says that some of the HGs think that it has to do with Camp Comeback, one of the powers or something like Team America. He talks about why he carries Orwell around the house. He says he does it because he knows that Orwell is iconic to the house and that it might get him more time on the feeds or show so that his family can see him more. He says he never thought it would cause him to go missing.

The next thing that Jackson overhears is Cliff talking about the possibility of a vote flip. He says that he would rather keep Jessica and vote out Kemi, but he started thinking that it might be more beneficial to him to keep Kemi around because she can possibly win the next HOH and shake things up the “Cool Kids Club” alliance. He was told they could potentially have seven votes with Sam, Nick, Bella, Nicole, Cliff, Christie, and Tommy. Then last night he was told that they didn’t have enough votes to go through with the plan to flip votes. He says that he is on board with sending Kemi out also.

He wraps it up with hoping that whoever wins HOH is on his side and he doesn’t end up going up this week. Worries that if Jess wins the HOH she might go after him and Kat, but he thinks that he can beat her in a vote. Talks about how he thought about throwing out a rogue vote, but is worried about Nicole or someone else being blamed for it. Says he will just vote with the house.

Jackson ran to the HOH room with all this information and filled Jack and Analyse in, he then went to talk to Holly. Tommy walked into his conversation with Holly and said he would fill Christie in later. Tommy and Jack fill Christie in shortly after that.

The Six Shooters are now planning on getting Cliff out next week, but why would they want to take out someone who is unknowingly giving them information? Is he really a threat to them? What do you think?