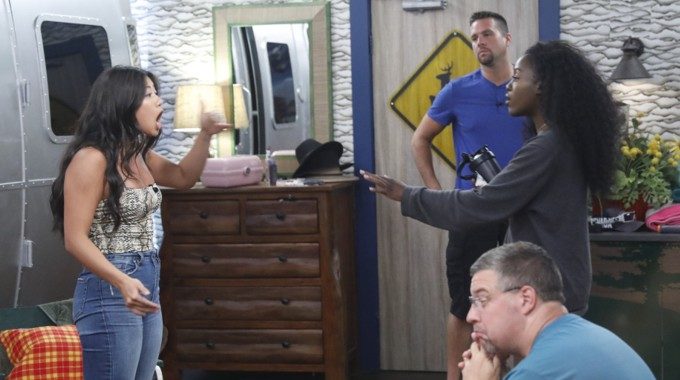 After several rounds of the same side controlling the game it looks like we could be getting some shots fired from within Gr8ful. Finally. “But first,” we need to see what happens with Camp Comeback as one of the first four evictees will be returning to full game but which of them holds the best chance at making it?

We had the chance again this week to chat with Big Brother’s Executive Producer Allison Grodner a pose a few game questions to her about the state of the house, what to expect (when you’re unexpecting), and what are her top Big Brother “classic” powers.

Big Brother Network: Camp Comeback added a new member with Kemi joining David and Ovi. If one of these three were to make it back into the game, who do you think would stand the best chance of going the farthest?

Allison Grodner: It is really hard to predict at this point. David has played a really good social game in the house since coming back, bonding with others and ruffling minimal feathers. With Gr8tful in disarray right now, it is possible whoever comes back will fly under the radar for a bit.

BBN: Nick and Bella don’t know it but are on the outs with the Gr8ful alliance and in the position to strike first but are doubting that move. Who within Gr8ful do you suspect would make that move and the first strike against their own alliance?

Grodner: Christie has been very paranoid lately and could choose to make a move based on a feeling rather than gameplay. It also appears that the 6 are planning to make a move soon and will probably beat Bella and Nick to the punch.

Grodner: The Diamond Power of Veto is always a big surprise and has probably been seen the most throughout the series. I like the possibility it brings to shake up the game. I also thought the Den of Temptation Powers played out in a fun and dramatic way with the Pendant of Protection, Ring of Replacement and The Halting Hex. Secret Powers in the game whether used or not create a lot of paranoia and generate lots of story for the house.

We need that power shift that Big Brother loves to deliver and while it doesn’t appear to be coming from the underdog side of the house it does look like we’ll have something to chew on later this week when Bella and Nick get quite the surprise on eviction night. Now for that classic Diamond Veto (kinda, sorta), that should be fun to see how if it delivers on its potential.