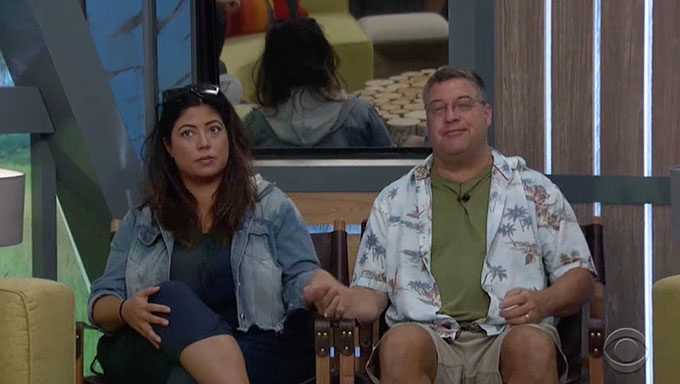 Happy (Double) Eviction Day! The Big Brother 21 houseguests are currently getting ready for tonight’s festivities, including some last-minute campaigns from the the nominees Jessica and Cliff.

Jessica put in a lot more work than Cliff did this week, but that’s because she really needed to. She made some valid points and even got Nicole thinking, but it wasn’t enough to convince Nicole to turn on her No. 1 ally for basically the entire season. So it looks like Jessica will be the first person heading out the door tonight. But how will the votes fall? Let’s take a look.

But more than likely, it’ll be 4-0 so that Tommy and Christie can not give Cliff any other reason to target them.

And based on our poll results for this week, our readers also think Jessica is walking out the door first tonight. She has 91 precent of the vote, so you’re pretty certain Jessica’s Big Brother 21 career is over.

Now for predicting who goes in the second eviction, that’s not so easy since we have no idea how the HOH competition is going to play out. But based on talks in the house, Nicole and Cliff are looking pretty safe. From the recent discussions on the Live Feeds, Holly would nominated Christie and Tommy with Christie being who Holly and Jackson would want out. If Christie wins veto, then it would be Tommy to go. I don’t think there’s a risk of her replacement nominee (who would likely be Cliff) going home.

If Christie or Tommy win HOH, the nominees are Jackson and Holly with Jackson as the target. If Jackson wins HOH, Holly would be the target, but there’s a definite risk that their replacement nominee could go home. And that would be Cliff.

If Cliff or Nicole win HOH, they’re leaning toward Tommy and Christie as nominees. So the Holly HOH scenario should be the same here.

What do you think will happen during the second Big Brother eviction tonight?