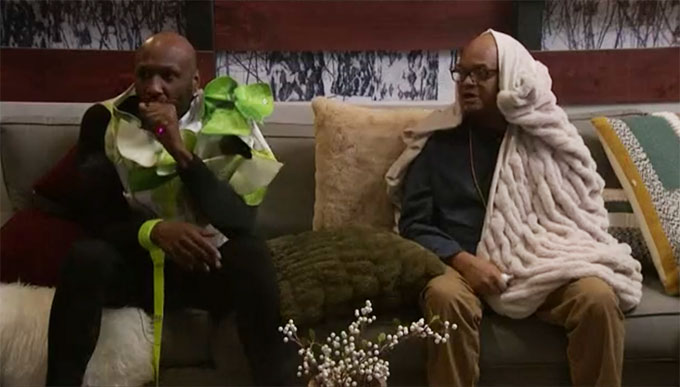 It was a quiet evening in the Celebrity Big Brother house, despite a new round of nominations. Most of the evening was spent just chit-chatting and hanging out while Todrick continued talking about Shanna every other conversation. We expected to see a disappointed and regretful Carson and Cynthia after their wacky gameplay last round, but it seems they haven’t a care in the world.

4:55 PM BBT – Lamar asking Todrick when he has to pack. Todrick says he only has to pack if he’s still on the block after the veto.

5:20 PM BBT – HGs are just hanging out, chit-chatting, and snacking. No major talks going on.

6:15 PM BBT – Todrick and Miesha discuss who is more irrupting between Lamar and Todd. Miesha says Todd is more irritating.

6:28 PM BBT – Todrick is complaining about having to wear his punishment costume.

6:45 PM BBT – Cynthia says she can’t figure out what they gave them the chance to both be safe this week by not putting them on the block (Cynthia could win veto and save Carson). Carson says if he goes this round then Cynthia goes next and then that final four is successful.

6:50 PM BBT – Cynthia tells Carson that she learned very early on not to underestimate Todd in this game.

7:50 PM BBT – Todrick is talking about his ex with Miesha.

8:44 PM BBT – Todrick is once again talking about Shanna. He says he guesses she’s talking to the jury right now, turning them against him. Todd says he thinks Shanna is at home not giving a F—.

8:46 PM BBT – Carson is cleaning up the kitchen while Cynthia is in the Diary Room.

9:18 PM BBT – Cynthia tells Todrick she doesn’t understand why Shanna was so upset with them for those last few days. Cynthia says she was upset with Shanna so it was awkward.

9:35 PM BBT – Todrick and Cynthia discussing that it would have been more exciting of a show for Shanna to play and win the Veto.

9:40 PM BBT – Todrick wonders who Shanna would have nominated. Cynthia thinks it would have been Carson. Miesha says probably her and Todrick.

10:33 PM BBT – Todrick explains to Cynthia and Miesha that his Cameo recordings are not unique and he does the same message for everyone. He hopes the cameras aren’t on him right now.

11:00 PM BBT – Miesha feels Shanna based her value on her looks and Miesha doesn’t like that.

11:50 PM BBT – Todd announces he wants a new computer when he gets home because his has Windows 95 but he wants to play games.

12:10 AM BBT – Todd and Lamar going over the week’s events and when is the next eviction.

12:20 AM BBT – Todd warns Lamar that Carson is too well-liked and they don’t want to have to sit next to him. Lamar asks if they’re voting out Carson and Todd confirms.

12:30 AM BBT – Miesha, Todd, and Lamar talk about a regular summer season duration and not being able to do 90 days compared to a month for this version.

Todrick is struggling to get Shanna’s name out of his mouth as she’s set on replay in his conversations. Meanwhile, Carson and Cynthia don’t seem too worried about anything this week and if Carson doesn’t turn it up then he’ll be out the door next, probably followed by Cynthia. Go figure.