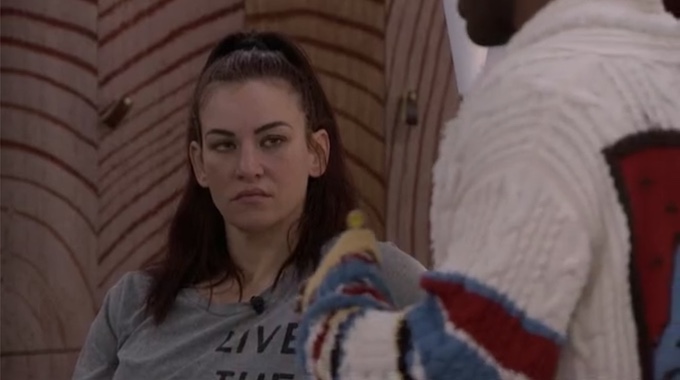 10:10 AM BBT – Miesha and Shanna talked about the Veto Ceremony and Miesha is hinting at not wanting the Veto used at the Ceremony.

10:35 AM BBT – Miesha talks to Todrick about him not being nice to Shanna and Kirkpatrick. Miesha tells him that he has to bring that niceness game back because she doesn’t want him to shoot himself in the foot.

12:08 PM BBT – Feeds are back. Shanna used the POV on Carson and Kirkpatrick has been renominated in his place.

12:10 PM BBT – Shanna tells Todrick and Miesha that she honeslty feels in her heart that if Carson or Cynthia won the Veto, she would have been on the block. Todrick asks her if she felt safe up until Kattan left? She says yes.

12:25 PM BBT – Miesha tells Todrick that putting Kirkpatrick on the block makes her have to choose between his (T) endgame and her endgame.

12:30 PM BBT – Cynthia walks through the room and Todrick tells her to let him know when she has time to talk. She tells him that she has nothing to talk about and that she doesn’t like the way this game is going. She tells him that when she leaves, she is leaving with her word, integrity, and class.

12:32 PM BBT – Cynthia storms out of the bedroom and moments later, we hear Cynthia and Todd screaming at each other from the cameras in the bathroom.

12:42 PM BBT – Cynthia is in the room talking to Carson and Todd is in the bathroom talking to Kirkpatrick. They are both still pretty heated. Apparently Cynthia voting to keep Teddi when Todd was sitting next to her triggered the argument.

12:45 PM BBT – Carson tells Todd that Cynthia just asked him if he had a problem with her. Todd says that he doesn’t and Carson adds that Todd then got up and came at her. Lamar and Carson are still trying to calm Todd down, but he is still really worked up.

2:27 PM BBT – Feeds are back. Shanna and Cynthia are in the bedroom, quiet. Miesha, Carson, and Todd are in the kitchen. Miesha asks Carson how Cynthia is and he tells her that she is upset and it’s hard not to take things personally.

2:40 PM BBT – Miesha goes to talk to Cynthia. Cynthia mentions how Shanna has made it clear that she is going to do anything it takes to stay in the game and she tips her hat to her. Miesha talks about how everyone is looking at her, but Shanna and her have won the same number of comps.

3:00 PM BBT – The HGs are lounging and talking throughout the house. No game talk going on right now.

The screaming match between Todd and Cynthia seemed to have been because Cynthia voted for Teddi to stay in round one and not Todd. She didn’t feel like she owed him anything because they didn’t have any kind of alliance. This caused some tempers to flair and the feeds to go down for a bit. When they came back up, everything was calm inside the Celebrity Big Brother house. My guess is there will be some campaigning going on until the live show Friday night, so stay tuned for details on those talks.