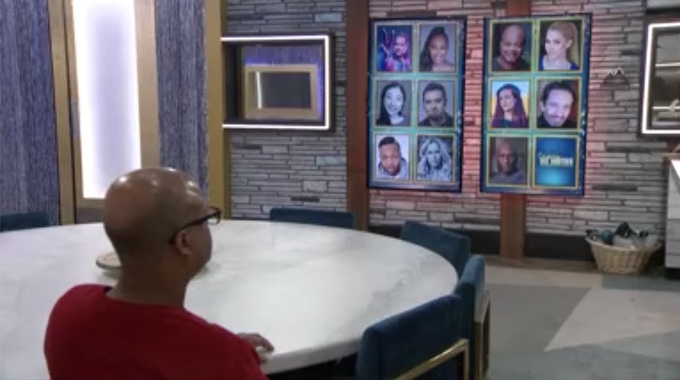 It was a slow start to the day with the Celebrity Big Brother 3 houseguests getting a later wake-up call than usual. One of the Celebrity Big Brother houseguests is getting a bit fed up with the others not doing their part of the cleaning. The Head of Household is still trying to pinpoint a plan for today’s Nomination Ceremony, but they seem to have a good idea of what they are doing. Read on to find out what’s going on.

10:45 AM BBT – Chris Kirkpatrick is complaing to Todd about how not everyone in the house is doing their part to keep the house clean.

11:15 AM BBT – Kirkpatrick and Shanna are talking in the storage room about how being there isn’t even fun anymore. Shanna adds that people in the house are just not nice.

11:25 AM BBT – Todd is complaining to Shanna and Cynthia about Chris Kattan. He says that Kattan came out of the room and asked him and Lamar to be quiet. Todd says that he didn’t say anything to them being loud before and adds that he can’t have it all. He already moved where he was sleeping for Kattan.

1:00 PM BBT – Kirkpatrick joins Shanna and Carson in the back bedroom. Kirkpartick tells them that he just needed to be around his friends. They talk about how stressful it is in the house because of little things like not cleaning up after themselves and being considerate of others.

2:03 PM BBT – Todrick tells Miesha that after they get Carson out, it doesn’t benefit him at all to go after someone like Cynthia. He says he would probably go after Kirkpatrick if given the opportunity.

2:05 PM BBT – Miesha tells Todrick that she really wants to get Carson out this week. She mentions that if Carson takes himself off the block, then they can send Kattan out since he wants to go home.

2:30 PM BBT – Todrick says that he thinks that Kirkpatrick is jealous that Todrick is so close to Miesha because he wishes that it was him. Mentions how Kirkpatrick is a huge fan of hers and he wants to be the closest person to her in the house.

2:33 PM BBT – Todrick says that he doesn’t trust Kirkpatrick, however, he is shifting into Operation: Be Kirkpatrick’s Best Friend as soon as he walks out of the HOH room.

3:00 PM BBT – Miesha and Shanna are in the HOH and Miesha is reading her letter from her HOH basket. Meanwhile, Cynthia is doing her makeup downstairs and chatting with Carson.

It sounds like Miesha’s current plan is to put Carson and Cynthia on the block together with Carson being her target. If the Power of Veto happens to be used on Carson, then the backup plan is to send Kattan out of the door. Todrick seems to really want to see Kirkpatrick leave in the near future, but I don’t think that Miesha is going to make that happen for him. We will have to see where the next few days take us.