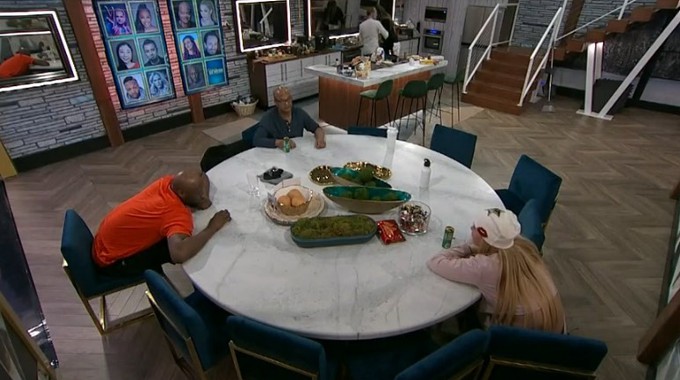 The Celebrity Big Brother HGs are settling into their routine now after the first eviction and a new Head of Household. Nominations arrived on Saturday and we’re expecting the Veto comp on Sunday ahead of Monday’s next eviction. Read on to see what the HGs were up to on Saturday leading into the nominations and who was pushing to sway the HOH to put their own targets in the spotlight on CBB3.

8:15 AM BBT – Lamar and Todd are up early and chatting in the kitchen. Todd mentions how Teddi seemed very upset with him that he didn’t save her from the Block with his bag renom.

10:05 AM BBT – Kirkpatrick and Miesha are exercising. She asks him his plan. He wants to get Mirai out. She suggests Carson as a renom if Mirai comes down but Kirkpatrick deflects the idea saying Carson is not a threat to him. He suggests Lamar might be the pawn nominee. They’re trying to figure out when nominations will happen.

11:30 AM BBT – Kirkpatrick goes to Carson and Cynthia to update them on his plan. He lets them know he’s going to target Mirai and will not nom/renom either of them (Carson or Cynthia) as he knows the other side would like to get them out.

11:50 AM BBT – Lamar is upstairs with Kirkpatrick in the HOH room. K is explaining to Lamar that he may be used as a pawn and he’ll need to win the Veto to keep it out of Mirai’s hands.

1:30 PM BBT – Kirkpatrick worries to Carson and Cynthia that one of them needs to win the next HOH or they could all be in trouble.

2:45 PM BBT – Todrick continues to worry and tells Kirkpatrick that he (T) would be at risk if he gets used as a pawn.

3:20 PM BBT – Shanna warns Kirkpatrick that Todrick and Miesha could be trouble for them. Kirkpatrick agrees.

3:45 PM BBT – Lamar is so excited that Carson is making them Kraft Mac & Cheese that he offers a big hug. Carson notes that’s all it takes to make Lamar happy.

3:50 PM BBT – Todrick tells Miesha that it could look like Kirkpatrick is targeting an Asian if he keeps going after Mirai.

5:27 PM BBT – Feeds are back from Nominations. Kattan and Mirai are on the Block.

6:25 PM BBT – Shanna talks with Kirkpatrick that Todrick was sharing he owns a 10,000 sqft home. They agree he doesn’t need the money as much as he claims.

7:20 PM BBT – Kirkpatrick tells Miesha and Todrick that he doesn’t want Mirai to know she’s the target. Miesha says it’s too late, that she knows already.

7:25 PM BBT – Miesha and Todrick are telling Kirkpatrick that Carson is dangerous for their games but Mirai is with them. They head upstairs from Storage to HOH room.

7:55 PM BBT – Todrick tells Kirkpatrick that he will vote out Mirai if it comes down to it.

8:10 PM BBT – Kirkpatrick tells Todrick his renom plan may be Lamar. Todrick says it should be Cynthia if he wants to make sure Kattan goes.

8:55 PM BBT – Kirkpatrick tells Shanna that Mirai somehow knows she’s the target. They agree that either Miesha or Todrick must have told her because no one else seems to talk game with her.

9:15 PM BBT – Kirkpatrick apologizes to Kattan for nominating him. Kattan says it’s okay and he’s here to have fun.

9:30 PM BBT – Kattan remained alone in the clock bedroom, staring at the ceiling.

10:30 PM BBT – HGs lounging and complaining about the house being too hot.

12:00 AM BBT – Feeds have been cutting in and out for most of the night. Most HGs are sleeping.

Chris Kirkpatrick and Shanna are on to Miesha and Todrick as the division in the house continues to grow. Sunday should bring the Veto comp and then we’ll see what might happen for a potential renom. Could Kirkpatrick make a sudden move against the other side or play it safe?