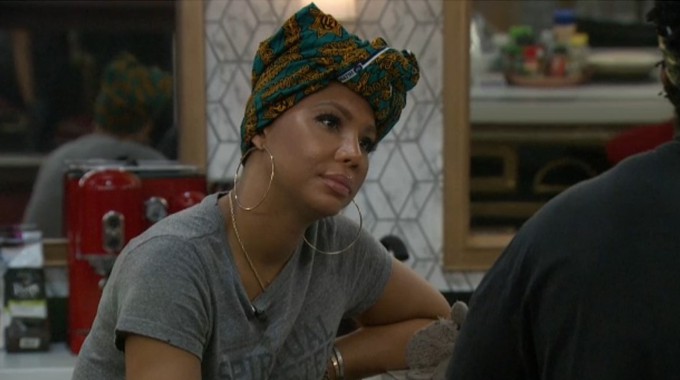 Down to just five Houseguests in the Celebrity Big Brother house and that’s slowing things to a crawl on the Feeds but that doesn’t mean the plotting and planning has ended. HGs continue to maneuver and manipulate as they try to line up their path to the F2 on Wednesday night’s finale.

8:30 AM BBT – HGs were finally starting to move around when Feeds cut. Time for the Memory Lane segment.

11:40 AM BBT – HGs are cleaning up all their breakfast brunch settings and champagne glasses.

11:50 AM BBT – Ricky notes to Tamar and Lolo that if Dina or Kandi wins Veto he’ll have to renom either Tamar or Lolo. He asks if she cares who it is. Tamar says she cares. They discuss tiebreaker situations

11:55 AM BBT – Ricky is trying to downplay the idea of taking Dina to the end. He tells Lolo and Tamar that it’d be an easy win but wouldn’t represent the idea of the game very well.

11:56 AM BBT – Lolo remains concerned about going on the Block next to Kandi but Tamar insists she wouldn’t keep Kandi and says she owes her nothing and doesn’t need to be friends with Kandi outside the house.

12:05 PM BBT – Lolo is worried by the idea of keeping Kandi even over Dina. She says Kandi will win at the end. Tamar disagrees and says that wouldn’t happen because no one likes her.

3:05 PM BBT – Lolo talks with Ricky about the earlier discussion on keeping Kandi. She’s concerned Kandi might keep Tamar for F2. Ricky counters that Kandi wanted Natalie gone so Lolo would take her (K) to F2 instead of Natalie. Ricky is sure Kandi would take Lolo over Tamar to the end out of concerns that Tamar could embarrass her with a defeat.

3:10 PM BBT – Ricky asks Tamar what she’d do with the Veto. Tamar says she’d keep the noms the same. Ricky says he doesn’t care because he’s already made the F4 either way. He questions if he can leverage anything with his HOH at this point in the game.

3:15 PM BBT – Ricky promises Tamar he’s taking her to F2 if he wins F4 HOH. Tamar suggests it may be time to cut Lolo. Ricky hesitates then agrees that if it comes to that with the Veto…

3:20 PM BBT – Ricky agrees with Tamar that he may need to target Lolo. He says if Lolo lays back and lets Kandi or Dina win the Veto then he’ll be okay with putting Lolo up.

5:00 PM BBT – Feeds have returned from nominations. Kandi and Dina are on the Block.

5:50 PM BBT – Dina camtalks to the evicted HGs and hopes they’re watching (and planning to vote for her). Dina says she has a new appreciation for Tom’s isolation in the game as she feels that now.

6:25 PM BBT – Tamar and Ricky complain about Dina being in the game. They don’t feel she deserves to be there.

7:30 PM BBT – Dina and Kandi discuss having guest visitors. They discuss Mark McGrath coming by. Dina says he mentioned there would be twists coming.

9:40 PM BBT – Kandi tells Tamar she was thinking and wants to talk later. Tamar starts to get worried about the discussion but Kandi tells her not to be so paranoid.

10:05 PM BBT – Lolo mentioned to Tamar that Ricky said he wants Tamar and Lolo to battle it out and the winner should take him to F2.

10:15 PM BBT – Lolo is concerned about how much money second place gets. She asks Tamar if she’s planning to take Lolo to F2. Tamar says she isn’t because Kandi already has enough money.

1:00 AM BBT – Everyone is now gathered in the kitchen to hang out and chat.

I’m enjoying how there’s no true loyalty but to the HGs themselves, as it should be in this game! We’ll only get two more eviction events and this Veto could decide if Kandi makes it to the end or not. Should Ricky and Tamar turn on Lolo it’ll be a nice twist to the season ender. We shall see!