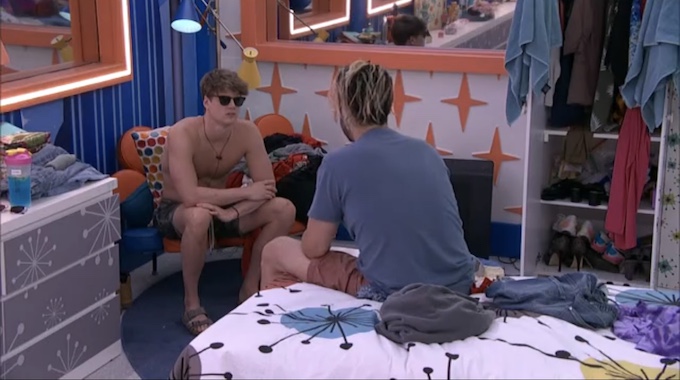 There has been a lot of talk inside the Big Brother 24 house about what could happen at today’s Power of Veto Ceremony. Either route could cause significant fallout with the other Big Brother houseguests after the Veto Ceremony. Read on to find out which plan Monte and the rest of The Leftovers alliance were leaning towards as of the early morning hours in the BB24 house.

The conversations inside the Head of Household bedroom last night didn’t wrap up until just after 5 AM BBT on Monday, but The Leftovers seem to have picked a route for this week’s Veto Ceremony. As we know, Monte is the HOH this week, Alyssa and Indy were his original nominees, and Daniel and Kyle went on to win the Veto. The plan this week was to use the veto and renom Taylor and Nicole with Nicole being the target.

Nicole is a super strong competitor and has made a lot of waves inside the Big Brother house, however, The Leftovers are wondering if Alyssa is just as much of a liability to their game. Nicole might be a strong competitor, but Alyssa has a strong social game and The Leftovers have pointed out she is also a great liar. With another number out on the other side of the house, even if Nicole won the HOH next week, The Leftovers would have enough votes to keep each other safe. I’ll get to that in a second.

At this point, they have changed the plan from using the veto to BD Nicole, to keeping the nominations the same and taking out Alyssa while she’s on the block. Here is how this scenario could keep The Leftovers safe from a Nicole or Daniel HOH. Hypothetically speaking, if Alyssa gets voted out, they are hoping that Indy would join Michael and Brittany’s Festie Bestie pair. Michael and Brittany have both been working on gaining trust with Indy. If she did join then Monte, Joseph, Michael, and Brittany could all be kept safe in a backdoor scenario because the other members of the Leftovers would just vote out the third wheels (Terrance or Indy).

While there is still plenty of time before the Veto Ceremony takes place and plenty of time for the plan to change yet again, I suspect that they will keep coming back to the plan of keeping nominations the same. Do you think that this is a better plan? Or should they get rid of an already paranoid, Nicole?