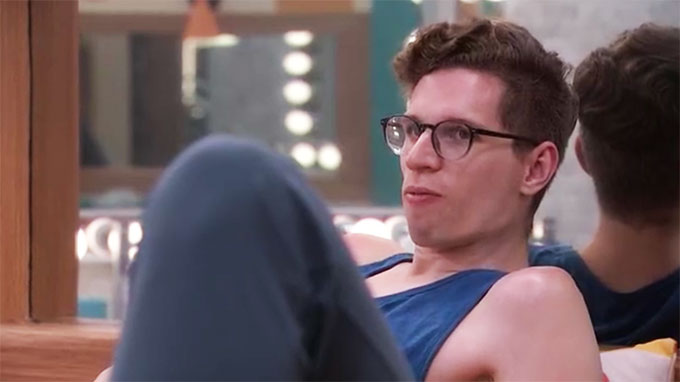 It was an oddly quiet evening in the Big Brother 24 house as some voting uncertainty came up for the first time since the whole backdoor Nicole plan started. Terrance is confused about the vote, and Kyle started showing some minor doubts about the Leftovers alliance. It doesn’t sound like the vote is changing, but when everything is set and the houseguests get bored, sometimes they start to wonder.

Read on to find out what everyone was thinking about last night as far as the vote is going and where the game could be heading in the weeks ahead.

3:20 PM BBT – Nicole says that Michael is playing the best game right now and she would vote for him to win. Daniel says he would too. Nicole says that’s why Michael needs them in jury.

3:33 PM BBT –  Nicole says being on the block is the worst feeling. She says it’s worse than being on slop.

4:02 PM BBT – Kyle still can’t believe Daniel was so certain about using the veto knowing Nicole could be at risk.

5:11 PM BBT – Not much is going on at the moment. Everyone is enjoying the backyard, just talking about this and that, no game talk at the moment.

6:15 PM BBT – Kyle asks Michael how he feels about those within the seven. Michael says he doesn’t know and hasn’t really thought about what to do when it gets down to their seven. Kyle says from Day 1 he has felt good about Michael. Michael says he feels the same. Kyle says he’s also felt the same with Brittany. Kyle says he likes Monte and Joseph but feels great with Michael and Brittany.

6:16 PM BBT – Kyle says when he hears “let’s get to seven” he cringes because while that’s great, he also doesn’t want to be the first one out of the seven.

6:27 PM BBT – Kyle is worried that Joseph and Monte have set themselves up better by getting closer to Indy, Terrance, and Jasmine.

6:29 PM BBT – Michael tells Kyle if Kyle wins HOH then Daniel can’t go up. Kyle says the problem there is they will want him to put up Alyssa. Michael says yeah, but if Taylor is joining Indy and Alyssa, they won’t want Taylor to go up a fourth time.

6:40 PM BBT – Nicole says everyone stopped talking when she walked in the room, even Kyle. But she says she thinks she’s fine with Kyle.

6:56 PM BBT – Jasmine says Brittany told her that she feels like the whole Taylor narrative is done and that she has the votes to stay. Jasmine said she asked who is they and Brittany said the guys.

7:16 PM BBT – Terrance tells Michael he hears all the girls are keeping Nicole so he isn’t sure what to do because he doesn’t want to upset the house. Michael tells Terrance they should have the votes to get Nicole out so not to worry.

7:46 PM BBT – Brittany tells Taylor she should be good. She says she thinks even Jasmine is open to keeping her but she could be BSing her.

7:48 PM BBT – Brittany says she needs to talk to Daniel because he’s the one she’s most worried about winning HOH.

7:57 PM BBT – HGs hanging out in the backyard, chit-chatting.

8:09 PM BBT – Everyone is still just hanging out. Joseph is working out and Indy is talking about cursing in other languages.

9:00 PM BBT – Kyle and Alyssa are hanging out, chatting, and flirting again.

9:25 PM BBT – Nicole campaigns to Brittany and says it was Ameerah who put distrust in her head about Brittany.

10:45 PM BBT – Daniel is camtalking and says there must be a six-person alliance out there. He plans to call out HGs and a house meeting if Nicole goes this week. He feels Kyle is the swing vote to save Nicole.

10:50 PM BBT – Michael worries to Brittany about what happens if/when they get close to down to their seven. He says Kyle relayed that Monte and Joseph think they have Terrance, Jasmine, and Indy in control.

11:05 PM BBT – Brittany and Michael discuss positioning themselves better and plan to work on Jasmine. They think she could be flipped but doubt Indy would.

11:10 PM BBT – Brittany and Michael want Daniel out but think if Kyle wins HOH that could give them the chance to get out Indy or Terrance.

11:35 PM BBT – Daniel and Nicole fear a repeat of last week is going on now with the vote flip. They say Monte won’t even talk to them.

11:37 PM BBT – Jasmine shares that Big Brother has officially taken away her scooter. She’ll have to wear the boot now.

11:50 PM BBT – Nicole’s plan is to join Turner and Jasmine’s Besties pair if she stays this week. Daniel is upset that Michael is with the other side. Nicole says Michael is just playing the game.

12:05 AM BBT – Michael updates Joseph that Nicole made her pitch to him but it wasn’t very good.

12:05 AM BBT – Indy and Jasmine discuss they need to keep Nicole because she isn’t coming after them. Indy says they should campaign for Nicole.

12:40 AM BBT – Daniel is working to rally Terrance for support in the vote.

12:45 AM BBT – Nicole campaigning to Alyssa and Jasmine that Monte told Daniel not to use the Veto so they could split up the showmance. Jasmine doesn’t think there’s a showmance.

12:45 AM BBT – Daniel tells Terrance it could be a 5/5 vote and Monte will have to reveal his position with the tiebreaker. Daniel plans a slow clap and biting commentary at Monte.

12:50 AM BBT – Terrance mentions to the camera he doesn’t know what he’s going to do.

12:55 AM BBT – Leftovers meeting up in the backyard. Short-lived discussion as Alyssa soon arrives.

1:05 AM BBT – Terrance is counting votes by himself. He says maybe he should just vote along with people who voted to keep him last week and let that ride for now. He notes that Taylor has supported him and has been in his corner.

1:15 AM BBT – Daniel is working on Turner now. He tells Daniel he doesn’t know what’s going on and doesn’t hear anything until Thursdays.

2:15 AM BBT – Nicole is campaigning to Kyle. Kyle is playing dumb. She’s telling him that Monte didn’t want the Veto used so they could vote out Alyssa. Kyle acts confused about why Nicole would even be the target and claims Monte never told him not to use the Veto. Kyle says he thought the plan was always to get out Taylor.

2:25 AM BBT – Nicole admits she could be telling Kyle details she shouldn’t if he’s working with Monte, but the plan isn’t for Taylor to go. Nicole shares the five votes she believes she has. Kyle questions the idea of Turner working with Taylor and Brittany. Nicole tells Kyle he’s the swing vote.

2:35 AM BBT – Kyle tells Nicole that if he was the swing vote then wouldn’t that group have come and said anything to him yet.

2:40 AM BBT – Kyle pretends to be overwhelmed by all these details from Nicole. He says they’re such good liars and snakes and doesn’t want to play anymore.

2:45 AM BBT – Kyle and Alyssa are showmancing again.

3:30 AM BBT – Kyle meets with Taylor, Turner, Joseph, and Monte to tell them what Nicole was pitching. He says Nicole is blaming this on Monte and she thinks she has Terrance in her corner. Kyle says he was almost laughing when she was telling him things.

3:45 AM BBT – Group discussion continues. Taylor wonders why the other women want to keep Nicole and Joseph says it’s because Nicole is a big personality.

4:00 AM BBT – The group talks about Jasmine’s extended healing time for her ankle. Turner is very annoyed with Jasmine over her demands for ordering others around to help her.

HGs had a busy night and Nicole isn’t going out quietly on this one but it seems her fate is likely already set. Terrance isn’t too sure where to land but if the LOs get back to work on him and he wants to stick with Taylor then that should be settled. The next round will be all about Daniel scrambling to find footing.