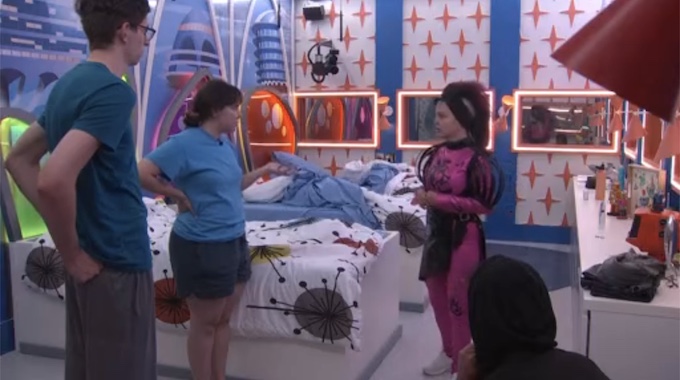 It is Eviction Day inside the Big Brother 24 house and this week’s target was feeling pretty safe until members of the Leftovers alliance decided that they would make it look like they were untrustworthy. It now looks like even the target’s own allies are going to be voting them out tonight on Big Brother. Find out what went down inside the BB24 house before the feeds cut for live show prep right here!

9:15 AM BBT – HGs have gotten their wake-up call, lights are on, but they are all still in bed.

10:10 AM BBT – Monte tells Taylor that he thinks the double is coming because they woke them up an hour earlier. They speculate about the amount of noise they have heard in the backyard and the HN room.

10:15 AM BBT – Talks turn to the HOH competition. Taylor tells Monte that the only one of them that will send another out is Terrance. Says that he would likely target Alyssa.

10:25 AM BBT – Taylor wonders if Big Brother will tell the HGs if tonight is a special two-hour show. Monte says they are probably overthinking this and it’s probably to give them (BB) more time to get all of Indy’s musical intruments out of the living room.

10:45 AM BBT – Michael and Alyssa are talking about tonight’s vote. Alyssa says that she would love to keep her here and Michael tells Alyssa that he is voting for her to stay so that she won’t go out unanimously if that’s where the vote is going. Meanwhile, Indy checks in with Taylor quickly in the HOH room. Tells Taylor that she is scared. She asks if Taylor could check in with Brittany because she thinks she is good with everyone else (Alyssa, Jasmine, Michael, and Joseph). When she leaves, Taylor whispers that she hates lying to her.

12:42 PM BBT – Indy asks Joseph to help her talk to people. He says he will as soon as he gets out of the shower.

1:12 PM BBT – Brittany, Joseph, and Kyle are coming up with a cover story for Alyssa and Jasmine to explain them voting against Indy to stay.

1:15 PM BBT – Indy tells Joseph that Terrance isn’t campaigning. Joseph says that maybe has accepted that he is going? She says that’s good for her, he agrees. She calls Brittany in and tells her that the girls, Joseph, and Michael are all voting for her to stay. Brittany tells her that isn’t what Joseph told her last night.

1:17 PM BBT – Joseph tells Terrance that the plan is to vote Indy out tonight and that Terrance always had his vote.

1:20 PM BBT – Alyssa asks Indy if she has talked to Joseph. She says that she did and he said he was going to talk to Brittany, but Brittany doesn’t believe him. Indy says that she trusts him and doesn’t think that he will vote her out. Indy thinks her biggest problem is Brittany and Alyssa says she will talk to her.

1:27 PM BBT – Indy pulls Joseph aside and tells him that Brittany doesn’t believe that he is going to vote for her to stay. He sighs and tells her to go grab Brittany.

1:30 PM BBT – Brittany and Michael walk into the room with Joseph and Indy. Brittany asks Joseph if he told her or not? He says not yet. Brittany tells Indy that her and Joseph compared notes and realized that Indy was in other alliances with each of them. Indy says that Five Swatters isn’t even a thing because Kyle didn’t save her. Brittany says that she wasn’t under that impression and Joseph says he wasn’t either.

1:35 PM BBT – Indy says that her intention was to never to hurt Brittany. Brittany wants to know why she didn’t say anything to her when she asked. Indy says that they clearly weren’t in a real alliance if he didn’t use the Veto to save her.

1:40 PM BBT – Brittany and Michael are filling Taylor in on the conversation they had with Indy.

1:44 PM BBT – Joseph joins Taylor, Brittany, and Michael and tells them that she is backtracking. He says that she knows that Joseph is likely not going to vote for her to stay.

1:45 PM BBT – Michael tells Indy that he is going to vote for her to stay and that’s all he can do himself. He mentions that Brittany is more hurt than anything.

1:50 PM BBT – Joseph is talking to Kyle and Turner about the conversation they just had with Indy.

1:53 PM BBT – Joseph tells Alyssa and Jasmine that Indy has been working with them and in an alliance with Brittany. He tells them that Indy said the Five Swatters was bull and it wasn’t for him. He says that she said it was only created to save Kyle.

1:55 PM BBT – Jasmine is confused and he tells them that him and Brittany were talking last night and he asked Brittany if she was working with Indy. He says that by her body language, he could tell that she was. Joseph and Brittany then compared notes on their two alliance, but both kept names out.

1:57 PM BBT – They both agree that if Indy was doing this, then the plan should be to vote for Terrance to stay. Joseph says that they should keep it quiet though so that she doesn’t blow up.

2:02 PM BBT – Indy tells Jasmine that Joseph told Brittany who was in Five Swatters. Jasmine gets mad and starts looking for Joseph.

2:03 PM BBT – Jasmine finds Joseph talking to the rest of the group and heard him say her name as she was opening the door. Jasmine asks if he told Brittany who was in Five Swatters. He says no and goes into the room with Indy. He tells Indy that she doesn’t know anyone except for him, Indy, and Kyle because Indy said something about him. Jasmine asked what that was all about (him with the group) he says they were asking Kyle about Five Swatters.

2:05 PM BBT – Joseph confirms with Jasmine that Brittany doesn’t know about Alyssa and Jasmine being in Five Swatters.

2:10 PM BBT – Brittany is now talking to Alyssa in the HN room. Brittany tells Alyssa that she was shocked to hear about how Indy has multiple alliances. Brittany says that if Alyssa is in the Five Swatters, she wouldn’t hold it against her. Brittany hopes that Alyssa can take this moment to trust her.

2:13 PM BBT – Brittany tells Alyssa that she needs to lay low and stay away from the drama. Brittany tells her how Jasmine saw them all in the SR talking and told them that she heard them say her name and then pulled Joseph. Alyssa tells her that she doesn’t want to work with Jasmine, but she keeps getting sucked in.

2:17 PM BBT – Alyssa admits that she was in Five Swatters. Brittany says that Indy said Kyle started it and Alyssa says no, Brittany said Joseph told her that same thing. She asks if it was Jasmine and Alyssa nods. Alyssa reiterates that she really wants to work with Brittany going forward.

Indy now knows that she is in deep this week and that her only solid vote right now is Michael’s. Alyssa and Jasmine have decided that they will be voting Indy out tonight also because to them the Five Swatters were a real alliance. Joseph and Brittany have now given themselves a cover as to why they are voting her out and Michael is now clear to give her the sympathy vote he wanted to give her. Is anyone else ready to see this new twist tonight shakes up the house? They aren’t going to see this one coming!