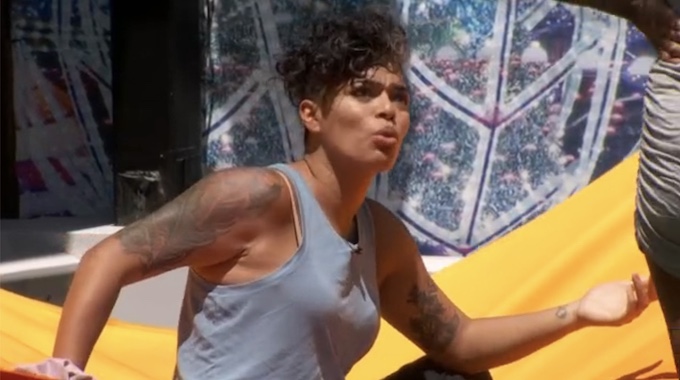 11:45 AM BBT – Turner tells Daniel that he isn’t put Taylor on the block this week because the things that people have been saying about her are disgusting.

12:55 PM BBT – Feeds return from the Veto Ceremony. Brittany and Michael  used the veto on themselves and Ameerah and Terrance were put up in their place. Indy is extremely upset in the bathroom.

12:57 PM BBT – Terrance tells everything that he wants Ameerah to stay over him.

1:00 PM BBT – Nicole and Daniel are talking in the HN room and they are both shocked about what happened. Nicole says that Turner asked her if her and Taylor made good after what happened on Saturday and she told him that they did.

1:03 PM BBT – Ameerah asks Terrance why them? Terrance says that he thinks that Indy influenced it because she has had it out for him. Terrance says that it’s okay though, he got further in this game than he ever thought he would. He tells her that she better win HOH next week.

1:07 PM BBT – Turner tells Jasmine that if he was in her (Taylor) position, he wouldn’t feel safe in this house going on the block three weeks in a row. He says that he never wants anyone to feel that way. She asks if Taylor knew she wasn’t going up, but Turner says he never outright told her she wasn’t going up.

1:10 PM BBT – Nicole and Daniel are talking about Ameerah getting whatever is in store for the person who survives eviction (they think Terrance is being evicted).

1:18 PM BBT – Indy wonders to Brittany and Ameerah if Turner is trying to protect Nicole from whatever the twist is for the surviving HG.

1:20 PM BBT – Monte is talking to Terrance and pretending that he had no idea this was going to happen. Meanwhile, Kyle and Brittany are talking to Ameerah and doing the same thing.

1:23 PM BBT – Terrance says that Taylor is playing the sympathy card with Turner and that’s how she didn’t end up on the block.

1:25 PM BBT – Terrance is confused why Turner would think that he would campaign against Ameerah? He says he didn’t think that all the way through.

1:34 PM BBT – Jasmine tells Brittany and Ameerah that she is so upset right now and she wants Indy gone. She says that Indy is the reason Turner couldn’t target Taylor because she went up to the HOH calling Taylor names and saying she wanted to throw things in Taylor’s face, but he didn’t want to put Alyssa on the block. Jasmine tells them that she must not have been there when Turner talked about his past with domestic violence and bullying.

1:40 PM BBT – Nicole is telling Taylor that she is relieved that she isn’t on the block and Taylor implies that she would have been safe, but Nicole tells her that you can’t predict what anyone is going to do in this house. Nicole tells Taylor to do whatever is best for her game going forward. Nicole wants to sit down with her and have a real talk about game.

1:43 PM BBT – Monte tells Turner that Terrance thinks that Taylor played the sympathy card and manipulated Turner into keeping her safe. Meanwhile, Indy is reporting back to Ameerah, Jasmine, and Brittany that Daniel said he didn’t know anything. Jasmine leaves and Indy says that she caught Joseph in a room with Nicole again for the second time.

1:46 PM BBT – Ameerah asks if she is the target? Brittany tells her that based on his speech, she would say yes. Brittany tells Ameerah and Indy that they have to make sure Ameerah stays this week and starts counting votes.

1:50 PM BBT – Joseph comes in and tells Ameerah that she needs to get out of the room and start talking with people. He wonders if Turner is targeting Terrance but Ameerah says that she is his target.

1:53 PM BBT – Turner tells Kyle that he told Terrance that he wants him to stay.

2:00 PM BBT – Ameerah asks Monte what happened? He says he wanted Taylor out this week more than anyone. Ameerah asks him to swear. He asks her why he would want Taylor there. She says she doesn’t know, but she doesn’t understand this at all. Monte tells Ameerah that Terrance brought up a good point that Taylor might be playing the sympathy card with him.

2:08 PM BBT – Joseph is running around telling people in The Leftovers about his conversation with Ameerah. Meanwhile, Ameerah asked Monte, Michael, Alyssa, Nicole, and Indy if she has all their votes. They all laugh in agreement.

2:12 PM BBT – Alyssa says to the group (Monte, Michael, Nicole, Indy, and Ameerah) he heard that Indy was the target, but didn’t want to put them up because he likes Alyssa. (Nicole told her that) They all leave the room and Nicole is flipping out about not being able to trust anyone in the house.

2:15 PM BBT – Nicole is sitting in the hammock and Daniel comes over to ask her what’s wrong. She asks him for 5 minutes and he walks away. Ameerah comes over and Nicole tells her that she is pissed because Alyssa threw her under the bus using her words. She says to be clear, she never told Alyssa that Turner was going to target Indy, just that she assumed Turner would put them up. She adds that’s the third time she’s slipped like that.

2:22 PM BBT Alyssa joins Nicole, Monte, and Ameerah outside and they ask her what she was thinking? Nicole tells Alyssa that she just threw her under the bus. Alyssa asks how? How would she know that she was talking about Nicole? Nicole says that if Indy starts questioning things…Alyssa doesn’t think that will happen but says that she would do damage control.

2:25 PM BBT – Daniel is clearly upset that Nicole pushed him away before and storms passed Jasmine and Terrance. Jasmine says that this might be good because they (D&N) are working together and this might split them up.

2:30 PM BBT – Nicole tells Monte in front of Alyssa and Ameerah that Taylor has been being included for the last two weeks. Claims that she is isolating herself.

2:35 PM BBT – Monte is filling Michael and Kyle in on what happened in the back bedroom and tells them now Ameerah thinks that Alyssa might be the reason Ameerah ended up on the block. Nicole comes in and asks Monte to talk. They go in the other room and she tells Monte that she needs him to do damage control with Daniel because he is pissed at her.

2:50 PM BBT – Ameerah, Alyssa, and Indy are talking about how three people knew about the renom. Alyssa says that Turner told her that he didn’t say anything to her or Jasmine because he didn’t know how close they are with Ameerah. She says they must be three people she doesn’t talk to. Alyssa makes a comment after Indy walks away that everyone is talking about her and she will be the new Taylor.

2:53 PM BBT – Joseph tells Turner and Monte that he has been doing damage control. Says that he has been telling everyone that if he wins HOH he is going to target Turner because he is a wildcard. Joseph adds that Nicole and Daniel are fighting now and Turner mentions that Jasmine is pissed too.

2:57 PM BBT – Nicole is talking to Daniel and she is telling her what happened. Daniel is mad that he couldn’t talk to her, but four other people could. Nicole says that she had to have a conversation with them about how to handle the Alyssa thing. Daniel says that Alyssa didn’t even seem like she did anything. Nicole explains that she didn’t realize until she came outside.

Ameerah has been blindsided and Terrance has announced to most of the house that he would like to be voted out this week so Ameerah could stay. Little does he know, that’s not going to happen. Alyssa’s loose lips might sink the Po’s Pack alliance’s ship as she opens her mouth in front of Indy and Daniel is beyond annoyed by Nicole brushing him off after that all took place. Will Daniel’s reaction to this situation break their F2? Only time will tell.