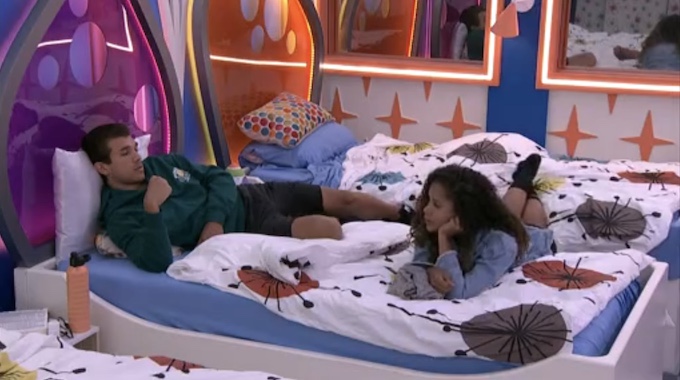 10:35 AM BBT – Terrance tells Daniel that if he needs anything in this game, he’s got his back. Daniel hopes that he can win HOH again so that he can prove his allegiance to Michael and Terrance.

11:00 AM BBT – Ameerah and Nicole are talking in the back bedroom. Nicole says that she is glad that her and Ameerah are on the same page. Ameerah tells Nicole that Indy tried to start an alliance with Monte and Joseph. They agree that Indy can’t be in the jury, but they can’t take that shot.

11:10 AM BBT – The HGs are enjoying the backyard doing yoga and lounging.

12:06 PM BBT – Feeds switch over to animal loops for Power of Veto Ceremony.

1:11 PM BBT – Feeds return from Veto Ceremony. Michael didn’t use the Veto and the noms remained the same.

1:40 PM BBT – Pooch is talking about having to pack to Ameerah and adds that he is feeling pretty comfortable securing the seven votes he needs to stay. Talks turn to who they are closest with in the house. Ameerah tells him that Jasmine and Alyssa are two closest two and Pooch tells her that Kyle and Turner are his closest.

1:55 PM BBT – Nicole and Ameerah are talking about Taylor admiting that she had feelings for Daniel. Nicole says that at least they know why Taylor hasn’t left Daniel alone. Ameerah tells Nicole that Pooch told her that she was his top girl and that he thinks he has her vote.

2:20 PM BBT – Nicole tells Ameerah that keeping Taylor around another week would be beneficial to them all. Ameerah agrees and says that she isn’t gunning for Taylor either. Nicole says that Taylor trusts her.

2:30 PM BBT – Terrance and Taylor are talking about next week. Terrance asks who she would put up next week and she tells him that she would put up people that voted against her. Terrance says that the initial put up should be Turner and Joseph and if one of them wins Veto, Monte goes up.

2:35 PM BBT – Taylor asks Terrance if he has been keeping Monte comfortable and he says he is. Terrance says that Monte has told him everything, but promised him nothing.

2:50 PM BBT – Michael and Taylor are talking about how Pooch really thinks that he is the pawn. Taylor says that they have eight or nine votes and adds all she has to do is keep her mouth shut and not hurt anyone.

3:00 PM BBT – The houseguests are sitting around chatting while others are in the kitchen cooking dinner. No game talk going on right now.

There you have it! The Veto Ceremony went as planned and Michael did not use the Power of Veto on either of this week’s noms meaning Taylor and Pooch remain on the block. Everyone is making Pooch feel as comfortable as they can and he is still convinced he is only the pawn this week. Can’t wait to see his face when he realizes that him volunteering to be the pawn turned him into a target.