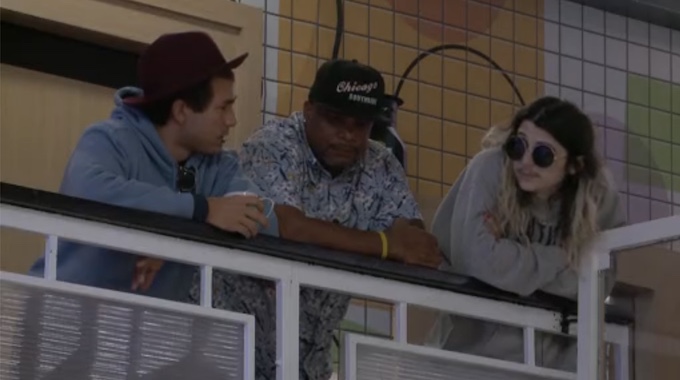 It is Nomination Day inside the Big Brother 24 house and what a busy morning it has been for the houseguests. This week’s Head of Household held all their meetings and put their plan into place and is hoping for an epic blindside come Eviction Night on Big Brother. Find out what happened before the Nomination Ceremony right here!

10:15 AM BBT – HGs are still getting up and ready for their day. Some of them are in the kitchen cleaning out the refrigerator.

10:40 AM BBT – Ameerah is filling Nicole in on the conversation with Pooch with Indy and Alyssa in the room. Ameerah tells her that his plan would include backdooring Taylor, but says that if Pooch is on the block on Thursday, Taylor isn’t going home. She adds that Taylor isn’t a threat to them.

10:55 AM BBT – Now that Alyssa is more awake, Ameerah is telling her and Indy the plan that Pooch came up with. She tells them that she doesn’t think that Jasmine is on board with putting Brittany up next to Pooch, but Pooch is likely going up.

11:13 AM BBT – Nicole tells Daniel that Pooch wants to put himself up on the block as a pawn. Daniel tells her that Pooch told him that last night. Nicole says that Pooch is going to go home. Daniel mentions that it’s tough for him because Pooch is a number for him, but he would rather work with the girls than the guys.

11:20 AM BBT – Nicole says that if Taylor stays, she has already shown the girls that she could be trusted and she will do whatever they want if she wins HOH. Daniel says it would be great to get out a guy, but what if Pooch wins Veto. Nicole says that if he wins Veto, Taylor would go home.

11:45 AM BBT – Jasmine tells Michael about Pooch coming to her and offering to go on the block. She says that if he goes home, there is no blood on her hands because he asked to be there. Michael tells her that if she puts Pooch up, she has his full support and would play to win in the Veto if she got HG Choice and wanted him to play.

12:12 PM BBT – Brittany and Jasmine are talking and Jasmine asks her who she would put on the block. Brittany says that she would make sure Taylor is up there. Jasmine says “for sure” but adds that a guy came to her and offered themselves as a pawn. Brittany wonders who it could be and says that she isn’t cool with Pooch.

12:15 PM BBT – Brittany asks if Pooch is on her radar and Jasmine says potentially. She also tells Brittany that someone told her that Brittany threw Ameerah’s name out as someone who was targeting Pooch. Brittany denies it.

12:35 PM BBT – Brittany tells Jasmine that if she won HOH, she was going to put up Turner and Pooch with Pooch as her target.

12:40 PM BBT – Jasmine tells Alyssa about Pooch and Alyssa asks if Jasmine wants Taylor or Pooch out. She tells Jasmine that she is okay with either and Jasmine says she is too, but she would rather get a big target like Pooch out.

12:45 PM BBT – Jasmine mentions to Indy and Alyssa that Brittany told her she never said anything to anyone about Ameerah.

12:48 PM BBT – Jasmine tells Indy and Alyssa that Brittany told her she would put Pooch and Turner up together because they are clearly a duo. Jasmine says that now that Paloma is gone, Turner only has Pooch. Jasmine then tells them that when she asked Pooch who he didn’t want to see on the block, he said Kyle and didn’t even mention Turner.

12:53 PM BBT – Jasmine tells Indy that she is thinking about putting Taylor and Pooch up and then tell Pooch that he doesn’t need to win because if noms stay the same, Taylor will go home.

12:55 PM BBT – Jasmine tells Kyle that he was never on her radar even though they have never talked game together. She says that she doesn’t think they really need to. Kyle does say that he would like to talk game with her more though.

12:58 PM BBT – Jasmine tells Kyle that Taylor is one of her ideas and Kyle says that that would put the least amount of blood on her hands. Kyle says that he isn’t sure if Pooch has come to her, she says that he has and he offered to go up. Jasmine mentions that she is scared of that option though because a lot of people have mentioned his name. Kyle says he knows and adds that he wouldn’t be heartbroken if Pooch went up.

1:05 PM BBT – Jasmine tells Kyle that she was worried that Pooch was Kyle’s best friend. Kyle tells her that he really doesn’t want that to be the perception. Jasmine thinks that it’s more because Pooch gravitates to Kyle and not the other way around.

1:10 PM BBT – Terrance tells Jasmine that Pooch told him that he wanted to go up. Jasmine says now she feels like she has to put him up because if she doesn’t, it’s going to look suspicious. Jasmine asks him if he would vote Pooch out and Terrance says he would.

1:18 PM BBT – Jasmine tells Monte that everyone wants Pooch out so far. She says someone brought up the fact that they will always have the numbers to get Taylor out, but they might not have the opportunity to get Pooch out again. (Terrance made this point to her)

1:22 PM BBT – Monte tells Jasmine that he thinks that Pooch is a wildcard because if you tell him something, if can spread around the house quickly.

1:25 PM BBT – Monte tells Jasmine that it might be a close vote to get Pooch out because there are some of them that have to save face. He explains how if him and Kyle vote Pooch out, Turner and Joseph might have an issue with that. Monte names him, Kyle, Turner, and Joseph and Jasmine tells him that one of them already told her that they would vote Pooch out.

1:30 PM BBT – Jasmine tells Monte that if he gets picked to play in the Veto and wins it, she wouldn’t be mad if he used it on Pooch. She says that would just open her up to getting Taylor out. She would just have to find someone to put next to her that no one wants out.

1:40 PM BBT – Jasmine tells Monte that she is happy to know that Monte won’t be upset with her if Pooch goes. Monte says there comes a time where you have to realize who is a liability to your game.

2:00 PM BBT – Jasmine says that they have to do this quickly because they only have an hour before noms.

2:05 PM BBT – Jasmine tells Joseph that she has to put Pooch up because if she doesn’t it will look like she is working with him. Joseph asks if Pooch and Taylor is her plan and Jasmine says that might be the best bet. He asks who she would put up if Taylor wins the Veto and she says that she doesn’t know for sure, maybe Brittany.

2:10 PM BBT – Joseph tells Jasmine that she should be careful what she says to Michael and Brittany because he thinks they are a duo.

2:35 PM BBT – Jasmine tells Taylor that she is going up against Pooch and that they all have her back. She also says that if she gets HG Choice, she is going to pick Michael because she knows that he will pull Taylor off the block.

2:40 PM BBT – Jasmine tells Indy and Ameerah that Monte isn’t going to vote Pooch out, but Kyle will.

2:53 PM BBT – Jasmine tells Daniel and Nicole that her plan is to put Pooch and Taylor up. Pooch is her target, but if he takes himself down, then Taylor will go.

2:55 PM BBT – Jasmine tells Pooch that he is going up next to Taylor and she has people in place to pull him down if they win Veto. If for some reason Taylor comes down, she will have to hurt someone else’s feelings.

3:00 PM BBT – Pooch tells Jasmine they have to make Taylor feel as comfortable as possible. That way she doesn’t gun it for the Veto.

There you have it, folks! The feeds are now down for the Nomination Ceremony and Jasmine’s plan is to put Taylor and Pooch on the block with Pooch as her target. Jasmine does have herself set up though if for some reason Pooch comes down, then Taylor is there as a backup. We will have the Veto tomorrow and then we still have a twist coming up at some point this week that has the potential to shake up the house. Stay tuned for all the details as the week plays out!