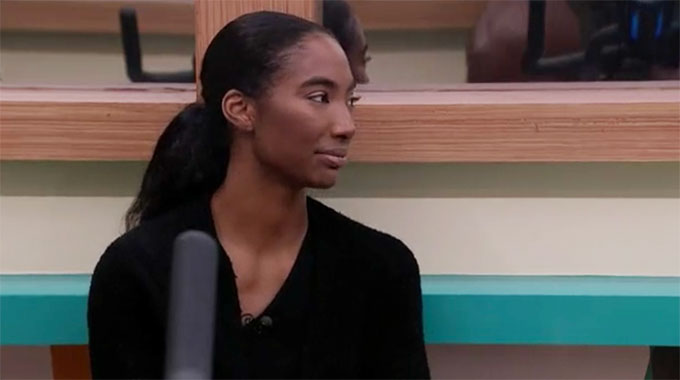 In typical Big Brother 24 fashion, the houseguests slept late, napped a lot, and then spent all night long talking about the vote and what is going to happen next in the game. Brittany and Alyssa continued to plot against Monte and Turner with the vote, but Brittany may have pushed too hard with Turner, assuring him that it would be more than OK for him to give Alyssa a sympathy vote (if you aren’t aware of their thin plan, it’s for Brittany to vote out Taylor, and hope that Turner gives Alyssa a sympathy vote, thus blindsiding everyone with a Taylor eviction).

10:48 AM BBT – Taylor and Monte are talking in the dark HOH room. Taylor tells him that “this” is impressive and adds that he has something there. He giggles and thanks her saying that circumstances are less than ideal, but he’s getting there…

12:40 PM BBT – After an extended cut to the “We’ll Be Right Back” screen, feeds return to Alyssa laying in the back bedroom. She heads to the kitchen to chat with Monte, Taylor, and Turner while Brittany is showering.

1:28 PM BBT – Monte comes back into the kitchen after a lengthy DR session. Tells Taylor, Turner, and Alyssa that he is going to be roasted. He explains that he must have said something stupid during their conversation in the backyard at 7 AM the other day. He gets yelled at by BB for talking about his DR.

1:35 PM BBT – Houseguests are talking about whether they use punctuation when they text.

1:37 PM BBT – Taylor tells Brittany that after she got out of the DR early this morning, she went up to talk to Monte about how upset she was about being on the block (covering up her sleepover). She tells Brittany that she feels bad for not spending time with her, but she has been really nervous about next week.

1:40 PM BBT – Brittany tells Taylor she and Michael had an understanding that she would say whatever she could to Turner and Alyssa in order to get information about where their (Turner, Alyssa, and Monte’s) heads were at. She apologizes to Taylor for not telling her sooner. She promises that she didn’t have a F2 with Turner.

1:45 PM BBT – Taylor admits she had some doubts about Brittany, just a lot of small things.

2:15 PM BBT – Alyssa admitted that she hasn’t washed Kyle’s blanket yet so it still smells like him.

2:45 PM BBT – Brittany comes to chat with Taylor. Taylor questions if she has bad news for her, but Brittany says she doesn’t. Taylor again pushes the cover story that she was made at Monte and they talked a lot last night.

2:50 PM BBT – Brittany questions Taylor on what Monte told her about what he knew and when he know she (T) was going on the Block. Brittany says Monte knew because Turner told him right away. She says Alyssa told her this and she doesn’t think she’d lie about it.

2:55 PM BBT – Alyssa says the three months have dragged out to feeling like three years in the house.

3:55 PM BBT – Brittany wonders to Alyssa if Turner will let Alyssa know tonight that he’s voting her out. Brittany said that he said if he was going to tell Alyssa, it would be tonight. Brittany says if he doesn’t talk to Alyssa about it, then that’s a good sign.

3:57 PM BBT – Brittany asks Alyssa to let her know if she thinks there’s a zero chance Turner will vote to keep her. Brittany says she’s all in on this plan and if it blows up in her face that’s fine.

4:38 PM BBT – Monte talking to the camera about how he appreciates the gym BB has given them, but he’s ready to get back in his own gym.

6:15 PM BBT – Everyone but Turner is hanging out in the gym chatting.

7:10 PM BBT – Turner and Taylor are napping. BB doesn’t seem to care if they’re awake or not anymore.

8:19 PM BBT – Alyssa says she is pretty sure that Monte knows Turner is voting to keep Alyssa and he will have to break a tie. So it’s a go for Brittany to also vote Taylor out.

8:35 PM BBT – Turner tells Brittany that Alyssa has said that if he votes her out, he loses a jury vote. Brittany says Alyssa will definitely hate him and says she told her that it would be even worse than if Kyle voted her out. Turner says it’s whatever because he has no jury votes anyway.

8:36 PM BBT – Brittany says if Turner throws Alyssa a sympathy vote it would be OK because she’s definitely voting Alyssa out. Turner says he doesn’t know if it’s worth it because of the way she threatened him. Turner says that he’s just going to keep telling Alyssa he’s voting to keep her, but will explain in his goodbye message why he voted her out.

8:37 PM BBT – Brittany says, “So you aren’t going to give her a sympathy vote?” Turner says if he will think about it, but doesn’t plan on it. He says it would make more sense to just vote how Brittany is so Monte won’t have to break the tie. Brittany asks why can’t Monte just break the tie… Turner says maybe it would be better.

8:41 PM BBT – Turner says that he didn’t like Alyssa saying they couldn’t be friends. He says that makes him wonder if there was even a friendship there if it’s that easy to say it’s over that easily. Turner says he will tell Alyssa that he’s voting to keep her but then vote her out and explain it in the goodbye message.

8:45 PM BBT – Brittany suggests Turner just pin it all on Monte. Their talk breaks up.

9:10 PM BBT – Great misfortune strikes the HGs. Taylor has dropped the icing behind the oven.

10:00 PM BBT – Brittany isn’t feeling well and says she has the chills.

12:15 AM BBT – Turner letting Monte and Taylor know that Brittany got him in Storage to discuss him giving Alyssa a sympathy vote. Turner promises Taylor he’s not voting against her.

12:20 AM BBT – Turner, Taylor, and Monte discuss how bad Brittany is playing. Turner says she wants to keep Alyssa because she (B) can beat her at the final comps.

12:35 AM BBT – Turner continues retelling his conversation with Brittany. They think she plays dirty.

12:45 AM BBT – Turner and Monte go upstairs without Taylor. They discuss how this must make Taylor feel to hear about Brittany trying to flip it on her.

1:10 AM BBT – Monte gives Taylor a kiss goodnight downstairs. (They are not sharing the HOH bed tonight.)

Shocking no one, Brittany & Alyssa’s plan to flip the vote appears to have failed. Turner seemed to always be planning to lie to Alyssa about his vote so it was set to flop from the start. We could still get a messy vote though if Brittany attempts it and forces a tiebreaker on Monte.