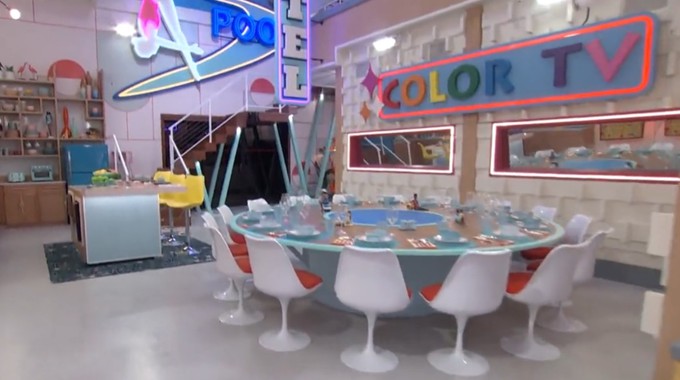 The doors are opening to us for the Big Brother 24 house with our first look at this summer’s setting when the new season kicks off on Wednesday, July 6th! We just met the BB24 cast earlier and have an initial, low-res tour of the HGs’ new home. We’re still awaiting the official CBS release of house photos for a higher-quality look, but this can get us started.

The BB24 house offers up all its usual fare of rooms and purposes but with a whole new design themed around mid-century Palm Springs, as explained to us by Julie Chen in the video below. We also get a quick look at the basics with the kitchen, living room, and a few of the bedrooms. Oh and don’t miss the pool themed Have-Not room that’s straight out of BB11.

We’ve still yet to see the backyard, HOH room, and the bathroom but those are probably not far behind especially when we’ve got the premiere tomorrow night! Plenty to see so far though so which bedroom would you be picking for your own? I think I’d have to go with the Jetsons space room for now but I do like how they’ve got four beds set up in the open golf room. Looks a little more spread out this time around.

Update: Here we are with a few more shots from around the house including a better look at the loft and first looks at the HOH room and exercise room. Still no shot of the bathroom, oddly enough.

Are you ready for another summer of expecting the unexpected?! Well, we have an exclusive look at the new #BB24 cast and house. pic.twitter.com/mPCwN24N80