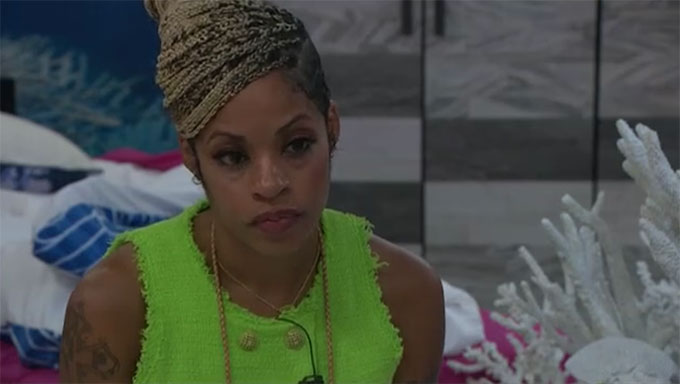 The new Big Brother 23 Head of Household Tiffany got to work right away, and it shouldn’t surprise anyone who her initial target will likely be this week. But who else will she be nominating, and how will Xavier being the automatic third nominee play into her plans? And don’t forget the Coin of Destiny could also come into play. Read on to find out what Tiffany has up her sleeve this week.

6:08 PM BBT – Tiffany tells Hannah that she owes her so much for helping her study for that HOH. Azah tells Tiffany she is so proud of her and so happy that she won HOH.

6:12 PM BBT – Hannah is running down the BB Bucks. She doesn’t think Sarah Beth would ever have enough to play the roulette and Alyssa definitely doesn’t have enough.

6:40 PM BBT – Sarah Beth tells Azah that she would have to get 100 BB Bucks from the envelope and 100 from America, and since she just sent home Derek X, she’s not getting that from America.

6:42 PM BBT – Derek F says to Kyland and Tiffany that Kyland needs to stay away from Tiffany. She agrees. Kyland says before noms they are friends, but after noms they are not friends.

6:50 PM BBT – Tiffany says she would like for Xavier (as the third nom from his punishment) to stay on the block so that Alyssa has to vote for Xavier to stay, and so X doesn’t have to vote against SB.

6:56 PM BBT – Tiffany tells Kyland that when they get to six, the two of them are the targets. Kyland says he needs to know who would target him. He says Tiffany is only Derek F’s #1 target at six. He says maybe he would be Azah’s.

7:12 PM BBT – Tiffany says to Claire that if the two of them, Azah and Hannah can agree not to target each other, that would be great.

7:16 PM BBT – Tiffany has let Claire know she’ll probably do Kyland and Sarah Beth and says that if Kyland comes off the block, she will probably have to do Alyssa. They agree Tiffany has to be careful with any kind of deals Alyssa throws at her.

7:53 PM BBT – Tiffany tells Azah that she’s been noticing Alyssa following her around. She isn’t sure if there’s something to it or if she’s in her head about that. Azah tells her to listen to her gut. Azah says she feels like Alyssa kind of follows her around too.

7:57 PM BBT – Tiffany asks Azah who she thinks should go up. Azah says Kyland and Sarah Beth. And if SB comes off then Alyssa goes up and has to go home instead.

8:03 PM BBT – Tiffany tells Azah they have to position themselves with Alyssa so that if they’re down to the seven and Alyssa wins HOH that she would want to target Kyland or Derek F and not them.

8:12 PM BBT – Derek tells Tiffany that if he won HOH he would have put up Kyland and Claire and then went for the Coin of Destiny to put up Sarah Beth.

8:14 PM BBT – Tiffany tells Derek that right now SB is her target. Derek is happy about that. He says they all had the same target. Derek says today DX told Alyssa that SB was coming after her, so Alyssa is ready for SB to go too.

8:15 PM BBT – Tiffany tells Derek to play to win that Coin of Destiny because now they really don’t know who will have enough to play.

8:20 PM BBT -Tiffany tells Derek when he leaves this conversation to act uneasy like he worries she might be using him to go on the block.

8:27 PM BBT – Alyssa goes to talk with Tiffany. Alyssa explains that SB told her to take Derek F off the block after her roulette win instead of Claire. Alyssa says DX told her that SB was thinking of targeting Alyssa this week even though Alyssa has been trying to gain her trust.

8:30 PM BBT – Tiffany tells Alyssa that she heard she (Tiffany) was Alyssa’s target. Alyssa says that is not true and she can ask Xavier. She says she has not trusted SB since Week 5.

8:32 PM BBT – Tiffany asks Alyssa if Xavier and Sarah Beth are on the block and she wins veto, what is she going to do. Alyssa says she would take down Xavier. Tiffany wonders if Alyssa would vote to evict SB or not if Xavier is off the block. Alyssa says keeping SB is not something she would consider right now.

8:42 PM BBT – Tiffany says in order for SB to not win veto, he’s going to have to go for it. He says he will. She tells X she is thinking of putting Kyland up next to SB so he can gun for veto too. She says and she’d rather Xavier win so she won’t have to nominate someone else.

8:45 PM BBT – Xavier asks what if Kyland won veto. She says she would have to put up Alyssa but Alyssa would in no way go home. Tiffany then says if Kyland comes down and X is still up, maybe she should put up Derek to stay good with Alyssa. Xavier says he’ll try his best to win veto so she won’t have to nominate anyone else.

9:07 PM BBT – SB tells Tiffany that if she was safe this week she’d have no reason to go after Tiffany and Claire.

9:10 PM BBT – Sarah Beth tells Tiffany she didn’t realize sending DX would matter so much to her. Tiffany tells her that “DX was never coming for me.” She says he was her friend and she’s probably still a little emotional over him going. She says it’s not that she didn’t understand why SB took the shot, it just put her in a situation she wasn’t in before.

9:12 PM BBT – Tiffany says to SB that she does not have two strong guys looking out for her like SB does. Tiffany says she relies on herself. SB says she knows girls relying on guys getting to the end usually don’t win. She says Kyland knows she wouldn’t pick him to sit next to at the end.

9:17 PM BBT – Tiffany tells SB thanks for talking with her and that she gave her some things to think about.

9:20 PM BBT – Tiffany is meeting with Hannah. She thanks Hannah for the help in preparing for the competition so she could win.

10:15 PM BBT – Sarah talks with Kyland about her meeting with Tiffany. She says she told Tiffany that she would not take Kyland to F2.

10:35 PM BBT – Kyland explains to Sarah that DX said in his speech that she was playing a “Nicole F game.” Sarah thought he said playing a “cold AF game.”

10:45 PM BBT – Sarah camtalking asking viewers to vote BB Bucks to Kyland so he can win the Coin Of Destiny.

11:10 PM BBT – Xavier points out that even if viewers gave him 100 Bucks and he got a bonus 100 Bucks from the HOH comp that it still wouldn’t be enough. He has no hope of playing for the Coin.

12:10 AM BBT – DF tells Alyssa he thinks he’ll go up on the Block. Alyssa thinks Claire will keep Tiffany’s noms the same if she wins the Coin.

12:25 AM BBT – Sarah talks to Kyland about trying to put the spotlight on Alyssa over herself in talks with Tiffany.

12:30 AM BBT – Tiffany goes to talk with Alyssa and Xavier. She tells them not to worry and reveals that Sarah threw both of them under the bus. Tiffany says she couldn’t work with someone who gave up others so easily.

1:00 AM BBT – Sarah is meeting with Tiffany again and trying to pin the target on Alyssa.

1:20 AM BBT – Tiffany tells Sarah she’s going to sleep on what she’s told her and think about it. Sarah asks her to talk in the morning again before the early nominations if she wants to discuss anything.

1:35 AM BBT – Sarah talks with DF and Azah about the Coin power. Sarah thinks she might be able to get 100 Bucks from viewers and another 100 Bucks from the HOH comp envelope then she’d have enough to play.

1:45 AM BBT – Tiffany tells Kyland that she’s sorry he has to go on the Block (next to Sarah) and just hopes Sarah does not win the Veto.

2:10 AM BBT – Claire and Hannah wonder if Sarah and Kyland have kissed. They don’t think so but notice their long hugs.

2:30 AM BBT – Kyland lets Sarah know it’ll either be them or Alyssa going up. (Kyland knows it’ll be them.) He encourages her to keep working on Tiffany and maybe they can get the Veto used and Alyssa will take Sarah’s spot.

2:50 AM BBT – Claire and Hannah are staying upstairs tonight with Tiffany. Tiffany says she’s glad to have them there.

Plans are set for this week’s nominations and those are coming up early on Friday so watch out for the results to be confirmed but for now it’s looking like Sarah and Kyland will be on the Block. Then after that, we’ve got the Coin of Destiny to potentially wreck Tiffany’s HOH. Who do you want to win the Coin?