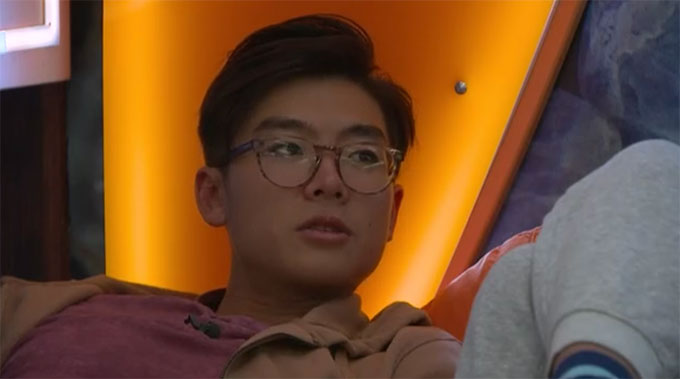 The Big Brother 23 High Rollers’ Room turned the game a bit upside down Friday evening, as one Cookout member was saved from the block and another went up by the spin of a roulette wheel. Read on to find out what Sarah Beth is thinking as a backdoor plan is within reach if the Power of Veto competition plays out in her favor.

5:56 PM BBT – Alyssa tells Claire that SB told her to take down DF. Claire says SB told her that it was Alyssa’s decision to save DF. Alyssa said SB told her to do DF because she didn’t want Kyland or Xavier possibly sitting next to DF.

5:57 PM BBT – Alyssa says she’d never do something the HOH didn’t want her to do. Claire says it’s a game and she has to do what’s best for her.

5:59 PM BBT – Xavier says for no on to stress about him being on the block. He says he’s not stressing. Derek F says X needs to win veto and hopefully SB puts DX on the block.

6:05 PM BBT – SB tells Xavier that she hopes he comes down because she is hoping she can backdoor DX this week. X says he’s definitely going to gun for veto and take himself down. He says this would be a good week for a big move.

6:08 PM BBT – SB talking to the camera says America is going to hate her because she knows Derek X is loved but she has a really good shot at getting him out this week. She says sorry, America.

6:12 PM BBT – SB tells Tiffany she doesn’t know exactly what she’s going to do until she sees what happens with veto. Tiffany says she just wanted to let SB know that whatever she wants this week she is OK with. She says she has had an emotional few weeks and she is trying to keep her emotions in check.

6:18 PM BBT – Alyssa asks SB if she has a target. She says she is not 100 percent certain, but if X comes down she will put DX up. Alyssa says she is on board with that.

6:26 PM BBT – Derek X said he wanted Tiffany to play in the competition, but she says she only got 50 BB bucks this week. She says now she has a total of 75. DX says he got 100 again. He says if they make it through this week he is guaranteed to be able to play in the next High Rollers’ Room competition.

7:00 PM BBT – SB is talking to the cameras again. She says she’s worried about DX telling Xavier and Alyssa that she knew about the backdoor Christian plan. She says her plan is to deny it all and swear DX is making it all up. She says she will tell DX that he was planting a lot of seeds against Alyssa and Christian and had her scared.

8:10 PM BBT – HGs are just hanging out, chit-chatting. Everyone knows there’s not much to think about until after Veto is played.

8:36 PM BBT – Claire tells Tiffany she feels like she can really win this Veto competition.

9:10 PM BBT – DX tries to ask Kyland what their plan should be for Veto but Kyland tells him to wait and see how Veto pick goes.

9:30 PM BBT – DX talks with Claire and Tiffany about the Roulette results. He says Kyland thought it turned out okay so maybe Kyland is okay with going against Xavier.

9:45 PM BBT – DX asks Sarah if she wants the Veto used but she doesn’t give an answer. Sarah asks if he’d save Claire with the Veto if he wins it. DX says he’d talk to Sarah before he did anything.

10:30 PM BBT – DX sharing with Hannah his talk with Kyland and how Ky said he didn’t know if Sarah had a target this week. DX is worried that Alyssa or Xavier will win the Veto.

11:15 PM BBT – Hannah feels anxious to play this Veto because she wants to win something already. She asks Kyland if he cares if Claire goes this week. He says he wouldn’t mind. Hannah says she won’t be upset if it’s DX who goes this round.

11:25 PM BBT – Kyland and Hannah discuss if there’s an advantage to sending DX out this week over Claire. Kyland thinks Claire is coming for him. He admits that’s his personal concern versus one for the Cookout.

12:25 AM BBT – Hannah camtalks that she’s sad (“it breaks my heart”) that the non-Cookout members don’t have a chance, but feels their Cookout alliance is doing something very important.

Despite the High Rollers results this week the Cookout is managing to navigate things and continue their hold on the game even with a non-CO HOH. They’ve really got this game in their hands. Now onto Saturday’s Veto comp to see what happens next as about the only way out of this for non-CO is a Derek Veto win then him saving Claire to force a CO eviction (Alyssa is safe due to High Rollers).