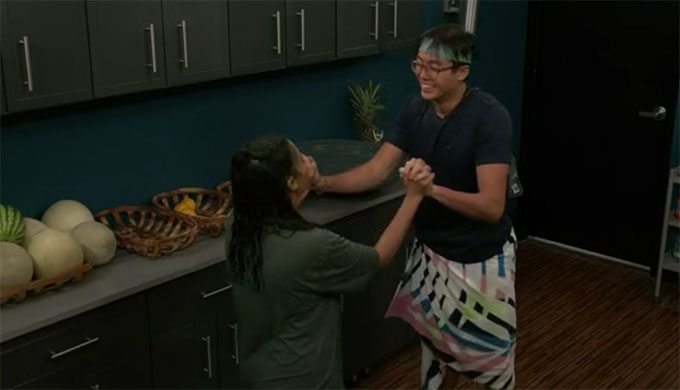 It’s officially Week 5 in the Big Brother 23 house, and after an intense battle of endurance, we have a new Head of Household. But like most HOHs this season, the pickings are slim since everyone is in an alliance with everyone. So will this be the week someone gets betrayed? Read on to find out what the nomination plans will likely be this week.

7:42 PM BBT – Derek F tells Xavier he thinks he might go on the block. Xavier says he doesn’t think so.

7:48 PM BBT – Derek X tells Hannah that Alyssa and Xavier are not hitting the block. He says those are the only things he agreed to on the wall. DX says but after they were on the ground, X told him he doesn’t want any of the Kings going up. But that wasn’t what DX agreed to before X dropped.

7:52 PM BBT – DX, Hannah, and Kyland celebrating in the storage room. They talk about all making it to jury.

7:53 PM BBT – DX tells Kyland about X saying he doesn’t want any of the Kings up and again says he didn’t agree to that.

7:55 PM BBT – Kyland says the craziest scenario is Christian wins veto and one of the Jokers go home, so it won’t be bad regardless.

8:00 PM BBT – Alyssa is annoyed that DX asked for safety for himself and Hannah when Alyssa and DX were both still on the wall. She asks X why he would be asking for Hannah to be fine also.

8:01 PM BBT – X tells Alyssa and Christian that he asked DX afterward to not put any of the Kings up and he said “deal.” Alyssa says as soon as Azah dropped DX told her they’re good. She says she doesn’t think he will put up Azah so he better put up Derek F. She says he better not put any of the Kings up. Christian says he doesn’t think he’d put him up outright and says he would go backdoor.

8:03 PM BBT – Azah tells DX she is proud of him and now doesn’t care what happens this week. She says he could use her as a pawn and she wouldn’t care.

8:08 PM BBT – Now Alyssa is saying she feels good about the DX win. She and Sarah Beth agree they feel safe and that maybe it was better for them that DX won instead of one of them. Alyssa is concerned how they’re going to be able to have Royal Flush meetings now since Hannah is going to be around DX all the time.

8:13 PM BBT – Alyssa tells DX she’s so proud of him. Hannah tells Alyssa that she made it to jury.

8:17 PM BBT – After Alyssa leaves Hannah and DX, Hannah tells him that she walked in on the Kings meeting and heard someone say one of them is going on the block or going home. She says they’re scrambling.

8:23 PM BBT – Azah again says she would be fine with going up as a pawn because she knows she’d be safe. Claire says she thinks DX final plan for this week is for a King to go home. Britini asks if they think she could go on the block.

8:25 PM BBT – Claire says she thinks there was a big chance the Kings would’ve taken a shot at DX this week. Azah agrees.

8:40 PM BBT – X tells Alyssa that DX winning this HOH helps Christian since Christian is seen as a competition threat. Now DX will look as threatening.

8:56 PM BBT – Tiffany and Claire discuss what DX might do. Claire says he might go with a Joker and Sarah Beth with Christian as a backdoor plan.

9:00 PM BBT – Sarah Beth says she doesn’t think DX will go after anyone in the Royal Flush. She says she thinks he just wanted to win to protect Hannah. She tells Tiffany and Claire this should mean they all make jury.

9:35 PM BBT – Alyssa tells Christian that Hannah told her they (Alyssa & Christian) made it to Jury.

10:00 PM BBT – Kyland talks with Hannah about target plans. He wants to see Jokers as the noms with Christian as the BD. Kyland doesn’t want the pawns to know they’re pawns.

11:15 PM BBT – Christian worries the Royal Flush will turn on him. Tiffany suggests the DE could be trouble.

11:30 PM BBT – Tiffany reports back to DX that Christian is worried. She suggests DX put up two Jokers then BD Christian. DX agrees.

11:35 PM BBT – Tiffany kept talking about the Royal Flush alliance in front of Hannah (who is not part of RF) so DX explains the alliance to her. He says it isn’t a real alliance.

12:05 AM BBT – Tiffany talks with Claire and is frustrated that Xavier told DX not to nominate any of the Kings this week. Claire wants to mention to DX that SB said she’d target DX later. Tiffany doesn’t want her to distract DX from the Christian target now.

12:20 AM BBT – Hannah updates Tiffany that DX is nervous about asking the Jokers to be his pawns. Hannah wants to know who started the Royal Flush, but Tiffany says she can’t remember. Tiffany asks who told Hannah about the RF and Hannah reminds Tiffany that it was her (T) because she can’t talking about it in front of her.

12:30 AM BBT – Tiffany camtalks that she can’t believe she spilled the RF in front of Hannah and didn’t realize it. She feels she’s in with Hannah on everything and forget.

1:15 AM BBT – Kyland advises DX to say little during his HOH meetings. Kyland asks DX if he promised the Kings they had made it to Jury. DX says he did not promise that.

1:20 AM BBT – Hannah and Claire worry that DF will be a bad pawn and ruin the BD plan on Christian which could cause trouble for DX later.

1:25 AM BBT – DX and Tiffany discuss Hannah learning about RF. DX says he covered by saying it was a 1-week deal made by Christian and Alyssa.

1:30 AM BBT – Britini and Azah discuss what DX might do. Azah thinks the target will be a King and says she’ll be comfortable if she ends up as a pawn. Britini doesn’t want to be a pawn again and thinks it should be Sarah’s turn. She plans to threaten DX that she’ll be pissed if she’s up a third time.

1:40 AM BBT – Kyland warns DF that one of them might be a pawn this week. DF doesn’t like that idea.

1:50 AM BBT – Hannah and Claire discuss the BD plan. Hannah thinks it should be fair with a chance at Veto, but Claire counters that Big Brother isn’t fair. They wonder if DF would retaliate against DX later.

1:55 AM BBT – Tiffany and DX discuss Kyland and how close he is with Sarah. Tiffany thinks it’s Kyland and Sarah with a F2, for Kyland.

2:00 AM BBT – Kyland worries to Sarah about how close Tiffany and DX are.

2:30 AM BBT – DX and Tiffany are still going through scenarios in the HOH room.

2:40 AM BBT – DX says Kyland made it very clear that he wants Christian targeted.

2:45 AM BBT – Tiffany advises DX not to tell the pawns that they’re pawns.

3:15 AM BBT – Remaining HGs getting ready for bed. Lights out.

Big plans for DX this week as we may finally get someone taking a shot at the Kings and the showmance within. DX still has plenty of time to figure out his pawns and what he wants to do next. Noms coming up Friday evening and then Veto on Saturday.