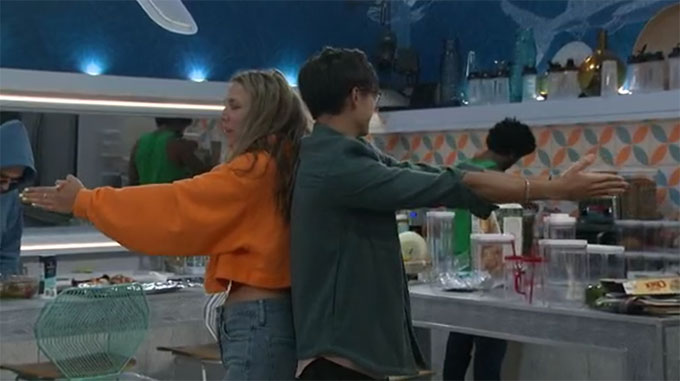 It was nomination day in the Big Brother 23 house, and it looks like the target has shifted from one to the other as members of The Cookout alliance got to work on Christian to change his plans just a bit. But the Veto could really put that alliance in its first big predicament depending on who wins it.

4:13 PM BBT – Christian tells Kyland he thinks he will make Hannah sound like the target in his nomination speech but then clear things up with her later.

4:14 PM BBT – Kyland asks Christian who he would put up of Whitney wins the veto. Christian says he is thinking Azah. He says he doesn’t know if Azah would go over Hannah though. Christian says Azah told him she had good reason to put him on the block because they don’t talk game very much.

4:16 PM BBT – Kyland tells Christian that he doesn’t like how much Britini is trying to protect Whitney.

5:37 PM BBT – Christian asks Hannah what she thought of his speech. She tells him it was well-spoken and says he did a good job. Hannah asks what the plan is. Christian says the plan is Whitney, not her. He says he thinks Whitney will blow up her own game now.

5:38 PM BBT – Hannah asks Christian if he mentioned her name as a pawn. He said he really didn’t because everyone knew his target was going to be Whitney.

5:50 PM BBT – Hannah tells Whitney it’s important for the both of them to just lay low. Whitney agrees. Whitney says she thinks she is going home if she doesn’t win the veto. Whitney asks Hannah if she thinks it’s possible that they’re up there as part of a plan to backdoor Derek X. Hannah says that’s a possibility.

5:51 PM BBT- Whitney says she would rather go home than Derek X go. She says she loves him and thinks he is playing a great game.

5:58 PM BBT – Derek X says he had a feeling something like this was going to happen. Whitney said she did too because Alyssa was acting weird to her all day. Derek says he thinks this is a scheme to backdoor him.

6:02 PM BBT – Whitney says it’s funny because when she would see people on BB giving up she would get upset with them and she hasn’t even been nominated an hour and sort of feels like not trying to stay.

6:06 PM BBT – Alyssa says she believes that Whitney would come after them before Hannah would.

6:15 PM BBT – Alyssa asks Christian if he notices that when the Royal Flush alliance is talking they don’t listen to them and Sarah Beth. Christian says he hasn’t noticed but will pay attention. Alyssa says she thinks they are on the bottom of that totem pole.

6:20 PM BBT – Christian says he would rather put up Azah as a replacement nominee over Britini but thinks Hannah would go home over Azah. Alyssa says he needs to decide who he would want in jury between Hannah and Britini. She says for his sake he would probably want Hannah in jury and not Britini. Christian thinks Britini would vote for him to win over Hannah though.

6:30 PM BBT – Tiffany tells Christian and Alyssa that if people are targeting them as a duo then people will be targeting her and Claire as a duo. She says it would make sense for the duos to stick together. Alyssa agrees and says they can look out for each other.

6:51 PM BBT – Whitney tells Christian she never said she was after the Kings. She says Christian, Alyssa and Xavier are her three favorite people in the house next to her team.

7:01 PM BBT – Whitney says to Christian that if she goes out this week he should keep an eye on Kyland. She says she doesn’t trust him and wants him out.

7:06 PM BBT – Whitney shares her Kyland paranoia with Xavier. She tells him to also keep an eye out for Kyland. Whitney thinks that she is on the block because of Kyland. She says it makes her want the veto even more so she can stay and target Kyland.

7:43 PM BBT – Tiffany now telling Derek F Kyland is the one who needs to go. She also shares her thought that Derek X told Kyland she was after him and now that’s why she’s on the block.

7:50 PM BBT – Kyland and Derek X are practicing a song and dance for some auditions game they’re playing. Game talk has stalled.

9:10 PM BBT – HGs just hanging out and fooling around at the moment.

11:25 PM BBT – Whitney goes to Alyssa to ask what happened. Alyssa says they just didn’t think she was being honest with them. Alyssa says they were told Whitney was going after her and Christian. Whitney says that never happened and she’s worried about Kyland, not them.

11:35 PM BBT – Whitney admits that if she doesn’t win Veto then she’s probably going home but believes Kyland is the bigger threat.

11:50 PM BBT – Alyssa relays to Xavier that Whitney is aware she’s the big target and needs the Veto. She admits that Whitney made sense on how Kyland has a lot of allies with Sarah, Azah, and DX plus his team (Queens).

12:00 AM BBT – Alyssa is stressing how to sneak up and stay with Christian without alerting the other HGs. Xavier suggests she doesn’t stay up there more than one or two nights. Christian wants her to stay more.

12:10 AM BBT – Alyssa talking with DF. He’s upset to hear that someone was making him out to be a target. She promises she doesn’t believe that DF was coming for her and Christian. He says his target was Whitney.

12:20 AM BBT – DF tells Alyssa that Claire supposedly said she’d put up two social players and he thinks that means him and Alyssa.

12:25 AM BBT – Alyssa is in the HOH room and tells Christian about her conversation with DF and how DF was supposed to be coming after them.

12:30 AM BBT – DF talking with Azah about what Alyssa told him and he’s upset. He says it was either DX, Whitney, or Hannah to put the spotlight on him. They decide it was probably Hannah but not sure. DF says he would target DX and Sarah if he gets HOH.

12:50 AM BBT – Azah tells DF she would target Sarah and DX then get their alliance (Cookout) to vote out DX.

12:55 AM BBT – Azah and DF worry about too many Kings in Jury and how they’ll be able to control the final vote. DF is sure he’ll be a target next week.

Saturday will be a big one for Whitney and the house’s plans to get her out. Christian wavered a lot of his target and it didn’t really matter this far from the vote. Hannah should be safe for now and we’ll see where Derek F goes with his concerns about Hannah.