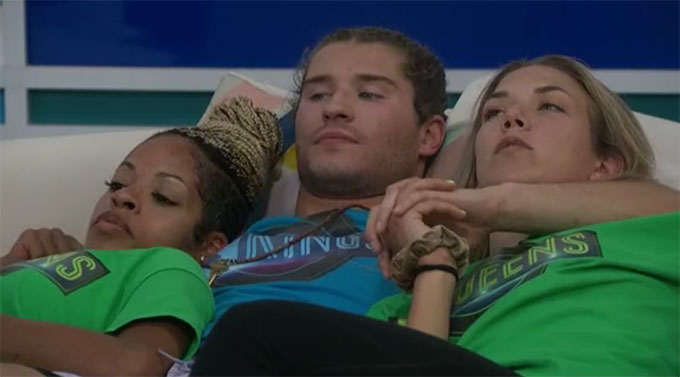 We’ve officially kicked off Big Brother 23 Week 4 with Christian as the new Head of Household and the house breathing a sigh of relief that Brent is gone. A few of the houseguests are already sweating as someone from the Kings winning HOH was the last thing they wanted to happen this week. Read on to find out what Christian and everyone else is thinking ahead of the Wildcard Competition.

6:14 PM BBT – Feeds have returned after the live show. HGs all gathered together talking about the competition they just finished.

6:16 PM BBT – Derek F says he’s worried about a Joker being a pawn again. Alyssa tells him she doesn’t think he has anything to worry about.

6:22 PM BBT – Christian is already dreading have to read in front of everyone as HOH.

6:23 PM BBT – HGs discuss their goodbye messages to Brent. Xavier asks if he was the only one who said something nice.

6:26 PM BBT – Derek F and Tiffany talk about how the Kings won because of Sarah Beth.

7:10 PM BBT – Xavier talks to Derek F about keeping the heat off the Cookout this week. X tells Derek F there are intended targets this week and the Jokers aren’t one of them.

7:11 PM BBT – Derek F tells Xavier that he really doesn’t trust Whitney and thinks she’ll do whatever it takes this week to not get evicted.

7:13 PM BBT – Tiffany tells Azah that Whitney can’t win safety. She says if that happens they will target Hannah and might also go after Claire. She says Claire has to really go for the competition.

7:20 PM BBT – Tiffany says one of the Cookout members cannot go home. Azah says Hannah might end up on the block, but if it’s her and Whitney, then Whitney is going home.

7:23 PM BBT – Tiffany says Whitney has no loyalty and she cannot trust her. Azah agrees.

7:26 PM BBT – Tiffany says the house is going to be divided if Hannah is on the block. She says their cards might have to be shown sooner than they wanted. Azah says they can see what the HOH wants and if he wants it to be Hannah, they’re going to have to vote Whitney out in a blindside.

7:28 PM BBT – Tiffany lets Azah know that Sarah Beth wants to send Hannah home because she thinks she is smart and is scared of her. Tiffany and Azah agree that Kyland can work on Sarah Beth to get her to change her mind on Tiffany.

7:40 PM BBT – Hannah talking about how relieved she is that Brent is gone.

7:51 PM BBT – Derek X tells Hannah it wouldn’t be horrible if Whitney went home because he can play in HOH and Christian can’t. Derek X thinks he can win. Hannah says Whitney is also the last piece of the Frenchie mess, so her going wouldn’t be a bad thing.

8:15 PM BBT – Christian decides he’s going to meet with the teams tonight and then do individuals tomorrow before the Wildcard competition.

8:54 PM BBT – Sarah Beth tells Kyland she thinks he’s good and says that Christian has talked about putting up Whitney and Hannah or Whitney and Azah.

9:30 PM BBT – Hannah talks with DX about her relief for Brent to be gone.

10:35 PM BBT – Tiffany, Alyssa, and Claire discuss how Whitney noted there are too many pairs in the house and how she highlighted Alyssa and Christian.

11:30 PM BBT – DF encourages Azah to be the one to play for safety in the WC comp instead of him. He says she can beat Whitney.

11:45 PM BBT – Christian tells Alyssa he doesn’t know what to do. She says it’s the same plan but now he gets to pick who is the target. She shares that Hannah told her she isn’t coming after Sarah and Alyssa.

12:15 AM BBT – Xavier encourages Christian to avoid making promises they can’t keep. X worries that if Jokers win HOH next week then Kings are doing going on the Block.

12:30 AM BBT – Christian is sorry he won HOH this week because he’s expecting endurance next week and can’t participate now.

12:40 AM BBT – Kings discuss if Whitney wins safety then Britini will be the renom and probably should just go at that point.

12:45 AM BBT – Azah mentions having a little crush on Xavier. DF says Whitney needs to go so Azah can have Xavier’s attention instead.

1:00 AM BBT – Tiffany and Claire discuss that the big pairs right now are Christian + Alyssa and Kyland + Sarah.

1:10 AM BBT – DX says Sarah saw how their team was doing the puzzle and copied them to win.

1:40 AM BBT – Xavier doesn’t tell Hannah about the plans but warns her not to talk too much game right now.

2:05 AM BBT – Xavier camtalks that he’s good with targeting Whitney this week and hopes WC doesn’t mess it up.

2:40 AM BBT – Xavier tells Alyssa that Hannah isn’t likely to take shots at the Kings but Whitney is more likely to do that.

2:50 AM BBT – Alyssa worries the temptation on the WC will be great this week after being turned down the past two weeks.

The Wildcard will set the final decisions but at the moment it looks like Hannah and Whitney are the Noms plans and which one goes will be decided through the week. But if that Wildcard throws a wrench in that plan then we’ll see some shifting. We’ll know more today after the comp.