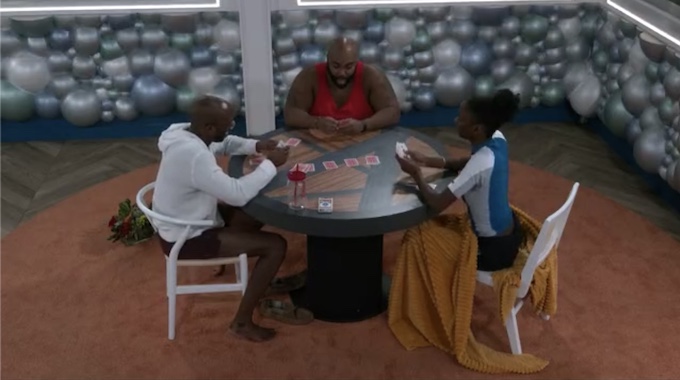 After Kyland’s exit from the Big Brother 23 house on last night’s episode, the Final 3 houseguests have had a lot to say about Kyland’s gameplay throughout the season. Also, Derek’s ring that his father bought him went missing during last night’s Big Brother eviction show. Read on to find out who took it and whether Derek expects to get it back.

10:18 AM BBT – Xavier tells Derek that he has some ideas for their F2 name. He says since they came up with the Cookout it could be something like The Chefs or The Grillmasters. Derek seems to like them but is set on B.A.M. (Bald Ass Men). Xavier suggests that they use that for their podcast, but Derek seems set on it so they go with B.A.M.

11:05 AM BBT – Derek has been looking for his ring that his Pop had given him since last night. It was apparently last seen in Kyland’s possession and they have come to the conclusion that Kyland must still have it. Xavier tells Derek that they will get it back.

12:05 PM BBT – Xavier, Azah, and Derek are all sitting in the kitchen talking about how Kyland seemed to have been doing so well in this game until he suddenly wasn’t. Azah and Xavier agree that the downfall started in Week 5.

12:36 PM BBT – Xavier says that Kyland was upset about not getting any notice, but says that at least he was packed. They laugh about how Kyland asked Xavier how thorough he should be in his packing.

12:58 PM BBT – Azah goes to lay on the couch while Xavier and Derek continue to play cards.

1:33 PM BBT – Xavier tells Derek that he thinks they can do better with their F2 name. They are brainstorming names while Azah is in the DR.

1:53 PM BBT – Xavier and Derek decide on the Creed because of their love for boxing and they are both very family oriented.

1:56 PM BBT – Derek tells Xavier that it’s been hard for him to come up with his F2 speech because him and Xavier played the same game.

1:58 PM BBT – Derel says that he thinks that he played a great social game that will do down in history.

2:00 PM BBT – Derek and Xavier are talking about past Final HOH competitions and speculating on what Round 2 might be. Derek says that as soon as he saw that the first round was endurance, he knows that it wasn’t his comp.

2:07 PM BBT – Xavier says that it is going to take him some time to forgive Kyland for what he said. He adds that Kyland is going to have some things coming to him from fans, but he won’t allow it to go too far because regardless, Kyland is still a person.

2:10 PM BBT – Derek says that bringing Xavier’s family into it was wrong. He could have said something bad about Xavier and kept it moving.

2:28 PM BBT – Derek, Azah and Xavier are recalling past F3s on Big Brother when Xavier was called to the DR.

2:45 PM BBT – All is quiet in the BB house. Azah is napping on the couch, Derek is in the Yacht room, and Xavier is in the DR.

Derek apparently handed Kyland his ring last night during the show to hold and as Julie asked Xavier to make his Veto decision, Kyland put it in his pocket. He then walked out of the house with the ring and Derek has come to terms with the fact that he probably won’t be getting it back. Derek is more worried about Xavier getting the apology he deserves from Kyland for what he said on his way out of the house.