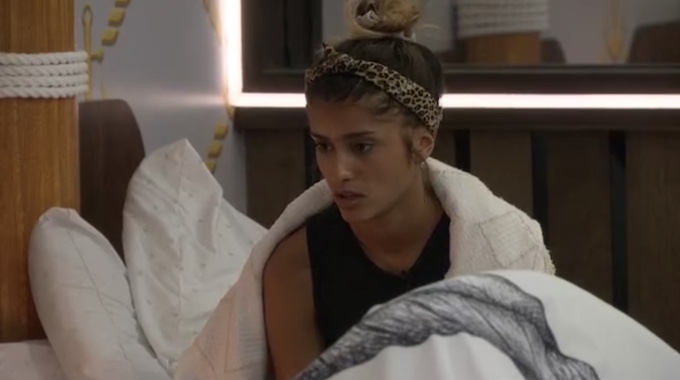 It’s Eviction Eve inside the Big Brother house and this week’s nominees have started their campaigning! Claire isn’t going to go quietly in this one and she’s putting up a good fight but out here we know her snowball’s chance. She’s working around the house though and we’ve got the updates on it.

10:16 AM BBT – Claire is camtalking in the HN room about how bad she wants to be here but she feels like she would just be taken out in the double anyway. She says at least if she was, she would know that Xavier was gone too.

10:45 AM BBT – Derek says that he wants the double, he wants to get it out of the way and get it done. He wants to win it and not have all the awkwardness.

10:57 AM BBT – Derek tells Kyland and Xavier that he doesn’t have anyone in Jury. Xavier says “you have Brit” but Derek says no, he doesn’t. Kyland tells him that there are so many people in Jury that like him.

11:40 AM BBT – Claire tells Alyssa that she thinks that if Alyssa was on the block next to Xavier, she would have gone home unanimously. Alyssa asks her why she thinks that and she told her that everyone keeps saying it was supposed to be an easy week and now it’s not. Alyssa asks why Tiffany was trying to get her to use the Veto on Xavier? Claire says because she doesn’t think that Tiffany wanted to put her up.

11:42 AM BBT – Alyssa and Claire are trying to figure out why everyone wants them out over Xavier.

11:45 AM BBT – Claire tells Alyssa that she thinks Tiffany knew that she wouldn’t have the votes against Xavier when she put her on the block. Alyssa is confused why Tiffany would do that knowing she might not have the votes.

11:55 AM BBT – Feeds come back, but we are getting music for audio on half the cameras.

12:08 PM BBT – Claire tells Hannah about her conversation with Alyssa and how she has no idea what Alyssa thinks is going on in the house.

12:20 PM BBT – Alyssa tells Derek and Azah that she is picking Tiffany for HN if they can pick. Derek tells Azah that he is picking her if he can because she needs her to be up there with Tiffany and Hannah. He doesn’t want those two to be alone up there.

12:44 PM BBT – Alyssa is talking about how Tiffany told her that Xavier wasn’t safe if he was on the block. She says no and that her and Hannah orchestrated the whole thing to make Tiffany think that. Alyssa mentions how stupid of a game move this is for Tiffany.

12:47 PM BBT – Alyssa tells Hannah that Claire told her Tiffany doesn’t think long term and Alyssa thinks that she is pretty sure it’s obvious wher her (A) is going. Hannah says that Claire is probably just making sure that they are good if she ends up staying.

12:55 PM BBT – Alyssa tells Hannah how Claire and Kyland were faking a chess game yesterday while Alyssa was walking around with the camera.

1:05 PM BBT – Alyssa is retelling her one-on-one with Claire to Xavier.

1:13 PM BBT – Xavier is starting his one-on-ones with Azah. He tells her that he feels like people are starting to look at him as more of a threat now than before. He says that if Claire sticks around, that puts her in a position to work with Hannah and Tiffany.

1:20 PM BBT – Azah asks Xavier if it’s true that Kyland doesn’t want to sit next to a woman in F2. Xavier says he can see how that could be true with a majority female jury. He adds that Kyland hasn’t actually said that to him though.

1:30 PM BBT – Azah and Xavier going over possible scenarios going forward. Xavier tells Azah that he can’t win the HOH this week, but Azah tells him that he has to gun it for at least the veto then.

2:15 PM BBT – DF camtalks about his power in the game. He feels powerful.

2:20 PM BBT – Xavier warns DF that if they keep Claire then it’ll be Claire, Hannah, and Tiffany working together to get out Azah and DF.

2:35 PM BBT – Kyland tells Tiffany that he talked with Xavier for about two hours last night and it was a good talk but it was practically their first real talk this season. He thinks people see him and Xavier as close but they’re not.

2:50 PM BBT – Xavier gives Kyland the same campaign speech about not keeping Claire or she’ll team up with Hannah and Tiffany. DF is upset and complains to Kyland and Xavier that Tiffany got selfish and messed up their game’s by exposing the alliance (by renom’ing Claire).

The Cookout is starting to steam even more and Thursday night could get hot in there! Will the Six stick together or can they not wait just one more round to take out Alyssa before going after each other?