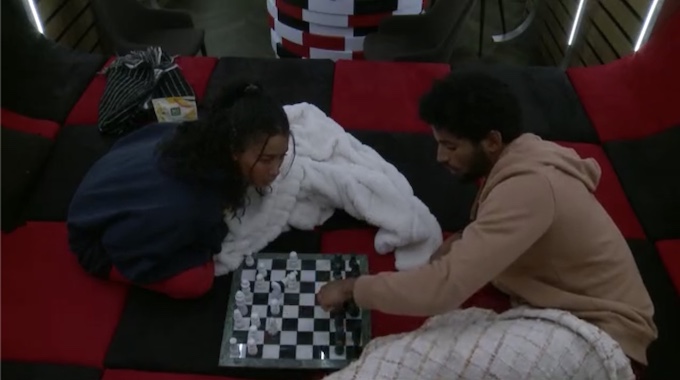 We have kicked off Week 7 of Big Brother 23 with Sarah Beth as Head of Household and the rest of the houseguests wondering what could happen. After the Nomination Ceremony took place, the rest of the Big Brother 2021 houseguests spent a lot of time trying to decide if they were going to play in this week’s roulette wheel twist. Read on to find out what happened on the Big Brother live feeds before the High Roller’s Room opened.

8:31 AM BBT – Xavier says that after Kyland’s HOH last week, he doesn’t see how that would benefit him or her for Kyland to be on the block. She says she isn’t going to put him up.

8:33 AM BBT – SB tells Xavier that she might do the same noms as last week.

8:48 AM BBT – Xavier tells SB that it might be a good idea to ask Hannah to play in the roulette so that if she wins, DX won’t have an incentive to play hard in the Veto because Hannah would be safe. He says that would leave DX wide open as a possible target later in the week.

8:50 AM BBT – Hannah tells Tiffany that DX wants to play in the roulette, which means that one of them (her, Hannah, or Claire) have to play too.

9:07 AM BBT – Xavier tells DF that nominations will likely be the same as last week. DF says that’s stupid and annoying and he’s over it.

9:23 AM BBT – Claire tells Tiffany that she should tell SB that she doesn’t have any money especially because it seems like SB will target someone with BB Bucks.

9:30 AM BBT – SB tells DF that she isn’t going to beat around the bush, but she is probably going to use him as a pawn. She tells him that DF and Azah are not her targets this week and she is really hoping that Azah wins the twist so that she can use it on him and they can both be safe.

9:33 AM BBT – DF tells her that he knows that there are people in the house that were trying to flip the vote last week. He says that this is BS because when DX was HOH, he was going to go after her.

9:34 AM BBT – DF says that he is just sick of the Jokers being the house punching bag and he’s sick of not having any comps that play to a person his size so he can have power.

9:35 AM BBT – Xavier tells Hannah the plan to nominate DF and Claire and that Hannah needs to play in the roulette. She realizes that is because DX won’t play and he also won’t be safe this week and says okay.

9:45 AM BBT – Claire tells her that she does see the benefit of her being on the block with the roulette power. Claire suggests talking to Tiffany about how much money she has and Claire says that she wants to talk to Hannah about it too.

9:50 AM BBT – Claire tells DX that she just found out that she is hitting the block. DX is wondering if he should play in the roulette now, but Claire tells him that SB said that Alyssa and Hannah would play. DX says that he will take her down.

11:07 AM BBT – SB tells DX that Hannah and Alyssa are willing to play and use the roulette the way she wants them to if they win. She also mentions that Tiffany and Azah might have enough money to play this week also. She tells him that if it’s up to him if he wants to play.

11:10 AM BBT – SB tells DX that the good thing is with the noms that she made, if they do stay the same, there is still the Veto. She says that she thinks that DF would go if they do, but with the Veto she could also look at former teammates, she doesn’t know.

11:17 AM BBT – SB tells Claire that she has a lot of people playing in this week’s roulette and there is a possibility that Claire will come off the block. Claire says that she isn’t mad about it at all.

11:28 AM BBT – Xavier tells DX that he thinks two people still in the house got the 100 last week. He hopes that they are people that he is cool with. DX tells Xavier that he has 100 from last week and Xavier tells him that he got 75.

11:31 AM BBT – Xavier tells DX that he is leaning towards saving if he gets 75 or more and DX should too.

11:40 AM BBT – DF is voicing his frustrations about this game and being on the block a second time.

11:45 AM BBT – SB fills Kyland in on her walk with DX. Kyland tells SB that he is going to tell DX that if he does win, then it would be in DX’s best interest to use it whatever way SB wants. SB tells him that she thinks that it would be better if Kyland could just convince DX not to play.

12:00 PM BBT – DX tells Hannah that if he gets 75 today he is going to play and he will let her know and she can save hers this week.

12:07 PM BBT – SB tells Alyssa that she thinks that they will have time to talk after they learn the rules of the comp before she asks people to play. She tells Alyssa that she would like Alyssa to win it so that she is safe from the roulette wheel. Alyssa and SB agree that the only thing that freaks them out is if whoever wins the roulette uses it on Claire and then Xavier or Ky end up on the block next to DF.

12:10 PM BBT – Kyland tells DX that he pushed SB to put him on the block and she told him that she didn’t want to do anything cocky or flashy. She is also worried about making any moves that would make too big of a splash.

12:16 PM BBT – Claire tells Hannah about her conversation with SB. Hannah tells Claire that she will play and so will DX, but both of us shouldn’t play. Claire agrees.

12:19 PM BBT – Claire and Hannah agree that SB’s ulterier motive is to get Hannah to spend all her BB Bucks this week so she can’t go for the power next week. Hannah tells Claire that Xavier is 100% not playing in the roulette.

12:27 PM BBT – Kyland tells Tiffany that he found out that only one of SB’s four targets is a Cookout member and and that is Xavier only because she doesn’t trust Alyssa. He adds that Claire is no longer untouchable to her, she’s her number two target.

12:35 PM BBT – Kyland mentions that he likes that SB stay out of his HOH all week, but he has been in hers the whole time and she is okay with that.

Claire and DF are on the block together again this week on Big Brother. However, that could all change with the High Roller’s Room twist going on right now. If DX plays and wins the roulette power, that means that he and Claire will both be safe this week and the probability odds are not in the Cookout’s favor when it comes to the random roulette.