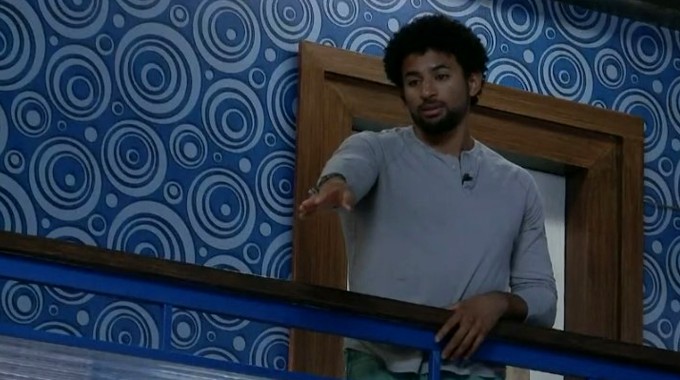 More than just Nominations Day, Friday was Wildcard Comp Day too for the Big Brother 23 Houseguests as the new Head of Household had to navigate another chance at safety for the rest of the house and then settle on his nominations in short order. Few interesting twists and turns along the day and soon we heard one name, without being said, get thrown around when it was time to point the finger for noms.

8:53 AM BBT – Tiffany tells Sarah Beth that she encouraged Kyland to not be afraid to play this game. She also tells SB that they are not part of the “cool people” of the house. She says the only way for them to have a chance is to get the bigger targets out of the house.

9:00 AM BBT – Sarah Beth tells Tiffany that Kyland knows that he isn’t part of that group either and he’s worried about Frenchie. She adds that Kyland knows that Frenchie being buddy buddy with him is all fake and that he was the real target last week. Tiffany asks what she thinks about Brent and SB tells her that he makes her nervous because he’s never talked game with her.

9:05 AM BBT – SB tells Tiffany that she doesn’t want Brent, Whitney, or Frenchie to win today, but says she would prefer Frenchie over any of them. Tiffany says she wants Derek X to win it, but SB doesn’t think that Derek X would take it because he feels safe with Kyland.

9:35 AM BBT – Frenchie says if Alyssa and Whitney play in the Wildcard Comp, he could probably get Alyssa to throw the comp to him. Frenchie asks Britini to tell people that she wants to play so that they don’t put up strong players.

9:42 AM BBT – Derek F tells Frenchie that he thinks that Kyland is going to have to put someone on their team up or the Aces because he doesn’t have a lot of options. Xavier comes over and Frenchie tells him that he thinks he is going to let Britini play today because Whitney and Alyssa might be playing from the other teams.

9:57 AM BBT – Xavier wonders to Brent and Frenchie what the comp is going to be today and if the implications are going to be the same (spinning to save teammates). Frenchie says they will probably swap that out. Frenchie mentions Britini wanting to play again.

10:05 AM BBT – Tiffany is trying to calm Frenchie down and tells him that she thinks that Kyland likes him and trusts him.

10:11 AM BBT – Frenchie asks Alyssa if she is wanting to play in the Wildcard Comp because if she does, he’ll let Britini play. Alyssa says that her team is doing a draw, but she was the first one that said she didn’t want to play. Alyssa tells him she thinks he should play and save Derek F also if he is able to.

10:16 AM BBT – Alyssa tells SB about Frenchie asking about the Wildcard Comp and reiterates that she is fine with the random draw. She says that they can revisit it depending on how they feel after their one on ones with Kyland.

10:18 AM BBT – Christian talks to SB right after about the Wildcard Comp and mentions that the first choice to save would be Christian. SB says she will volunteer to play and if she wins she will pick him to be safe, but she is worried she would be a target next week for playing.

10:25 AM BBT – Christian goes to Alyssa and Xavier and asks if they are good with a draw. They both say yes and Christian mentions that SB wants to play. They said that was fine too if she wants to.

10:30 AM BBT – Frenchie tells Derek X that he isn’t playing in the Wildcard competition. Derek X says that he hasn’t talked to Kyland, but he doesn’t think that Frenchie has anything to worry about.

10:37 AM BBT – Adoptable Animals for the Wildcard Comp player pick.

2:53 PM BBT – Feeds are back from Wildcard Comp. Sarah Beth won the Wildcard Comp but didn’t take the safety because she didn’t want to switch teams.

3:00 PM BBT – The HGs are sitting around talking about the comp while Tiffany and Claire are celebrating with SB about her win in the bathroom!

3:15 PM BBT – Sarah lets her team know how Frenchie exposed the Slaughterhouse alliance to her. She still wants to keep working together.

3:30 PM BBT – Kyland has a talk with Alyssa for his pre-nom discussions. She says Frenchie is a problem and she knows there is a women’s alliance that she’s not part of.

3:35 PM BBT – DX is up and Kyland asks if he trusts Frenchie. DX isn’t sure what to think of Frenchie but he worries there’s an alliance forming without him.

3:40 PM BBT – Christian’s turn. Kyland asks if he (C) would let the mastermind play for Veto or do a BD. Christian says to give that HG the chance.

3:45 PM BBT – Hannah tells Kyland about Frenchie trying to start an all-girls alliance and be the leader of it but she doesn’t need him to lead her.

3:50 PM BBT – Kyland discusses if he should let the target play. Without naming names, Xavier says the target would go crazy if he didn’t get a chance to play. Kyland admits he’s thinking of nominating Britini and Frenchie.

3:55 PM BBT – Brent tells Kyland he didn’t know the hinky votes were happening. He thinks the first week was a mess. Kyland asks if anyone should be cast out of the Slaughterhouse. Brent says to get out the one who started it.

4:10 PM BBT – Claire warns Kyland that Frenchie has a lot of people around him.

4:15 PM BBT – Tiffany tells Kyland he’s doing a good job with his HOH approach. She advises Kyland to nominate Brent and Whitney then renom Frenchie if one of those comes down. She says one of those three has to go this week. Tiffany wants the Kings, Queen, and DX to join up and work together.

Waiting now to get these nominations confirmed and I’d be amazed if Frenchie came out of this week safely even if he doesn’t show up on the screen tonight. Will Kyland be direct or go for the BD with the house’s favorite target this week?