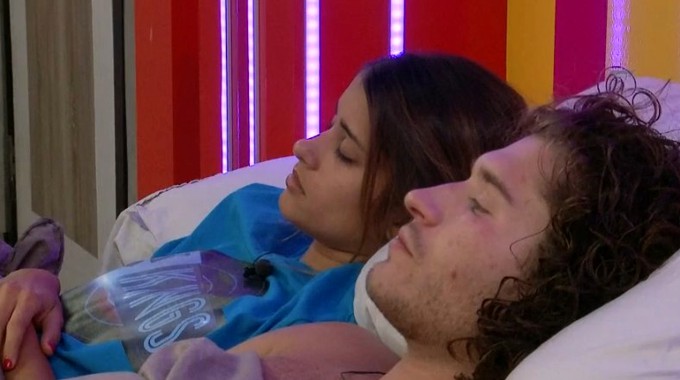 Saturday was Veto Comp day for the Big Brother 23 Houseguests as they readied for the noms’ chance at safety. With the target set the pressure was on and there was some tough competition to go with it. By the night’s end the target was settled and HGs are jockeying for the chance to put their own next target in the spotlight.

8:30 AM BBT – Derek F is upset that word spread that he would target Kings (Hannah repeated it yesterday.)

8:55 AM BBT – Xavier has been camtalking. He’s stressed by Hannah because he’s been trying to provide her cover this week and she keeps creating situations that make her a target again.

9:50 AM BBT – Derek X, Xavier, and Christian debating who should win the Veto. They want Claire or Azah to win but definitely don’t want Whitney to win.

10:40 AM BBT – Alyssa tells Kyland that Whitney is targeting him and has been talking about him.

10:50 AM BBT – Britini comments that she’s surprised Hannah picked DX for HG Choice. Sarah says she isn’t surprised by that.

11:10 AM BBT – Tiffany tells Hannah this could be a DE week because Claire got the two weeks of safety in her WC reward. (It is not a DE week.)

11:20 AM BBT – Hannah and Tiffany go over options in case it is a Double Eviction. Tiffany wants Sarah gone and Kyland needs to be up against her to make that happen.

11:40 AM BBT – Hannah shares with Tiffany that Alyssa started a rumor that Hannah would have nominated Alyssa and Sarah. Tiffany says no one believes that.

11:55 AM BBT – Hannah worries Sarah would put them (H & Tiffany) up together. Tiffany agrees.

12:15 PM BBT – Tiffany asks Christian who worries him for next week. He says Azah told him directly she’d put him up. Tiffany admits she’s been having some stress between her and Azah.

12:40 PM BBT – Azah worries to DX that if they don’t get a King next week then it’ll be too late and they’ll be there for the longhaul.

1:05 PM BBT – Azah wonders to DX if anyone has ever won Big Brother without winning any comps… (Dr Will says Hi).

3:47 PM BBT – Feeds are back. Christian is wearing the Veto.

4:00 PM BBT – DX tells Claire that Christian is scary good. She doesn’t think he’ll hold up in puzzles. DX points out Christian won the first puzzle against him.

4:10 PM BBT – Hannah worries to DX that someone was pushing for her to be the target this week and that’s how she ended up on the Block.

4:40 PM BBT – Christian and Kyland discuss that Whitney wants to go home before Jury so she can see her kids. They wonder if the vote will be unanimous. They agree that while Hannah knows a lot about Big Brother they don’t expect a BB History comp so she’s not a worry for them.

5:00 PM BBT – Claire talking with Britini about future targets. Claire says she’d go after the Kings rather than just focusing on the duos.

6:10 PM BBT – Christian tells Alyssa that Azah is the only HG he’s afraid of. They both want her gone next.

7:30 PM BBT – DX tells Hannah he wants to keep trying to work with Christian. Hannah thinks the WC twist isn’t over yet. She thinks Kings would target the two of them.

7:45 PM BBT – Hannah questions why anyone would want to let the 4 Kings stay together going into Jury.

8:00 PM BBT – Sarah tells Kyland she’s glad Christian won Veto to build an even bigger target on his back.

8:20 PM BBT – Azah and Tiffany think Sarah is playing up the quirky vibe to hide her true abilities.

8:25 PM BBT – Tiffany talks with Azah about the Cookout plans vs her own. Tiffany doesn’t want to go after Christian like the Cookout will want her to do.

8:35 PM BBT – Azah admits to Tiffany that she’s feeling petty but wants Xavier to herself and doesn’t like Whitney rubbing his hands and touching him.

8:50 PM BBT – Whitney is back to rubbing all over Xavier.

9:05 PM BBT – Alyssa talking with DX to see if she should be worried about Hannah. She wants DX to try and make sure Hannah won’t come after her and Christian.

9:20 PM BBT – Alyssa reports back to Christian that DX wants to work with the two of them plus Tiffany.

10:20 PM BBT – Kyland tells the HOH crew that Whitney let him know she’s expecting to go home and has been keeping lowkey.

10:55 PM BBT – Tiffany and Xavier discuss what to do about Christian + Alyssa. X says he can’t target them because they’re on his team. Tiffany doesn’t want do it either. They hope DX would do it. (DX was just saying he wants to work with Christian and not target him.)

11:00 PM BBT – Xavier says if he wins HOH next week then he’s targeting Britini even though his team won’t understand why he won’t go after Hannah (Cookout ally). Tiffany says he could put up Hannah with Britini and let the house decide. X says they need to keep the Cookout quiet until Christian is gone.

11:10 PM BBT – Alyssa tells Sarah that she (A) would take out Christian if it was best for her game.

11:40 PM BBT – Sarah encourages Whitney to fight for votes and says she (W) wasn’t the target the whole time (SB was pushing for Hannah before).

12:25 AM BBT – Kyland checks in with Sarah. Sarah thinks DX would have saved Hannah if he had won Veto but Kyland says he wouldn’t have unless Christian said it was okay. Sarah wonders why DX didn’t throw the comp. Kyland says they agreed to not throw it once they saw the comp.

1:00 AM BBT – Tiffany tells Claire she wants to wait for the DE to make her move. She’d put up Kyland and Sarah. They both want to try and align more with DX instead of Kyland.

1:20 AM BBT – Sarah says they’re either doing a Double or an Endurance this week (it will be Endurance).

1:50 AM BBT – Tiffany talks with Xavier and pushing that Sarah is a threat and should be the target. Xavier is more concerned with splitting up the showmance before Jury. Tiffany suggests Sarah could be America’s Player. X is coming around to Sarah being a target.

2:40 AM BBT – Most of the HGs are asleep. DX, Claire, and Kyland are still up and chatting before heading to bed.

Whitney is done but Sarah is right that she should still try to get something rolling against Hannah. It’s her only shot even if it’s a long one. Doubtful we’ll see much traction on that though as Whitney says she’s ready to get home to her kids and business.