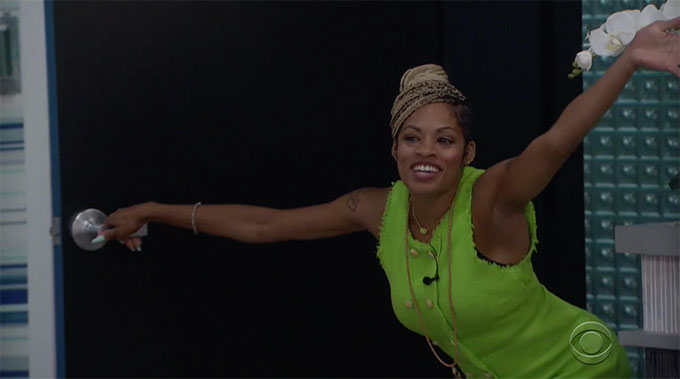 The Big Brother 23 High Rollers’ Room will not be going down as one of the great BB twists, as once again, the whole thing just kind of flopped. This week the twist might have dethroned Tiffany as HOH, but with her keeping her safety, getting to vote in the eviction this week and play in the HOH next week, that’s one dethroning I’d be onboard with.

Sunday night’s episode picks up after Tiffany won the Head of Household competition. And there’s some celebrating going on, but with the Coin of Destiny possibly in play this week, there’s some apprehension.

And then there’s Sarah Beth. She knows that she just sent Derek X out, who Tiffany really wanted in the game. So she’s not feeling that great about Tiffany being HOH.

Alyssa is sweating a bit too. But again, the Coin of Destiny is still there, so everyone just has to wait and see how that plays out.

Tiffany checks in with Kyland about what he thinks about the nominees this week. He says fo him and Sarah Beth. This was Tiffany’s plan anyway, but it works out for her better to hear him say it. She says “what about SB and Alyssa,” but then kind of talks him out of being OK with that idea. So it’s looking like SB and Kyland will be on the block, along with Xavier, who is already nominated this week as part of his veto punishment from last week.

And we get an HOH room reveal for the first time in forever. Which I guess will help make up for what happens later with the Coin of Destiny.

Tiffany made her rounds before nominations, and Sarah Beth picked up on her being a possible target, so she gets to work on throwing Alyssa under the bus. SB tells Tiffany that Alyssa lies to a lot of people and brings up Alyssa saying Tiffany was disappointed the SB won HOH.

But did Sarah Beth throwing Alyssa under the bus work? Let’s get to the nomination ceremony and find out. 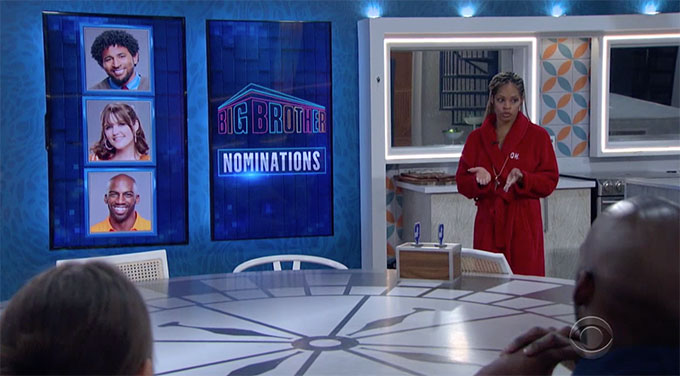 Tiffany decided to go ahead and nominate Sarah Beth and Kyland for eviction. And Xavier is already a nominee. And Tiffany, of course, lets us know that Sarah Beth is the target. But lets Sarah Beth think that Kyland is her target.

But once again, let me remind you that the Coin of Destiny could change things. So let’s get to that and find out what’s going to happen.

The houseguests head to the High Rollers’ Room to find out if they have enough BB Bucks to play the Coin of Destiny. This week, America voted on more bucks, and the HGs also picked up envelopes with BB Bucks in them after the last HOH competition. They need 250 BB Bucks to play.

Alyssa is up next and gets 75 from America and 100 from her envelope. That’s 175 total, so not enough to play because she played last week.

Before we move on, let’s cut to Tiffany and Hannah. They decide it would be best that Claire wins the Coin of Destiny this week so Claire can keep the nominees the same and all the Cookout members can play in HOH. Tiffany lets DF know the plan to and tells him she’s OK if she doesn’t want to play. That way he can play HOH next week.

Hannah enters the High Rollers’ Room next and gets 100 and 50 for a total of 300. She decides to not play in the competition. Kyland gets 50 from American and  100 from his envelope. That’s 200 total, so he cannot play.

Derek F gets 75 BB Bucks from America, plus 100 from his envelope and another 100 from the veto competition last week. He ends up with 425 total. Derek F decides to play in the competition, but tells us he’s not going to try to win. He takes his time and only scores 1 point. So that should be easy to beat. 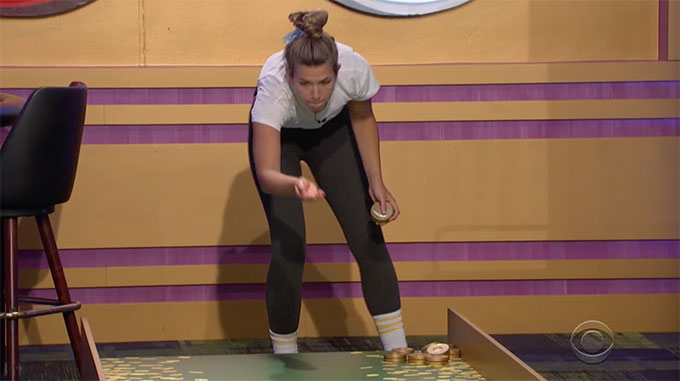 Claire is up next. She gets 100 + 50, which makes her overall total 250. That’s just enough to play the Coin of Destiny. And she tries to win. And she scores a 3. That’s not much, but still enough to beat Derek F.

Tiffany learns she is still safe this week, and can now vote in the eviction. AND she gets to compete next week. But her nominations have been erased. 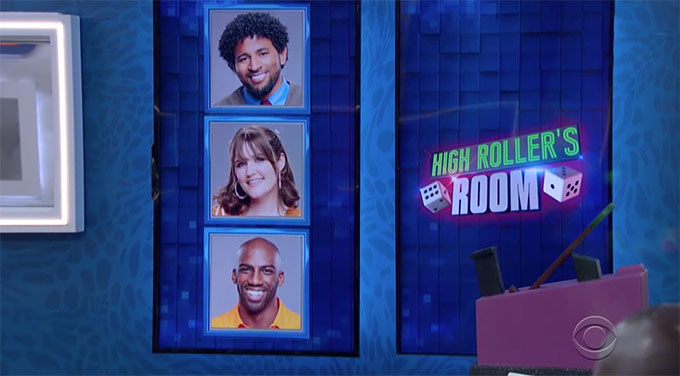 But then the winners nominees are announced, and the they are the same as Tiffany’s, Kyland and Sarah Beth. And Xavier remains on the block as the third nominee. So this really works out in Tiffany’s favor. She gets to vote, play HOH next week and still have her targets on the block. I definitely call that keeping her crown.