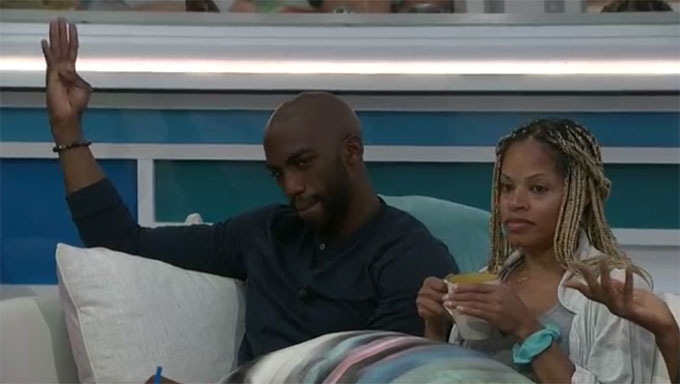 It’s Eviction Eve in the Big Brother 23 house, and either Travis or Alyssa will join the not-so-elite list of Big Brother first boots.

And since this has been a very usual and dramatic first week, it should come as no surprise that there has been very little push for from either nominee. Travis did a little work bonding with people, but there has been no real heavy campaigning. It’s very strange, and hopefully not an indication of how the rest of the season is going to play out. But let’s take a look at how the votes should play out this week.

Since the game is currently in teams, it would be presumed that Travis would have votes to stay from his teammates Claire, Tiffany an Kyland. And you could say the same for Alyssa’s team, Christian, Xaiver and SarahBeth. But the whole teams thing has really not been much of a factor, because once again a BB twist has pretty much flopped. So while Travis’ team might have him believing they’re going to vote to keep him, I don’t think anyone wants to go against the house to give anyone a reason to target them next. We all know that is sadly the new normal with Big Brother. No one ever wants to go against the house.

But let’s look at the possibilities now.

Votes to evict Travis: Everyone else

And then it could just be unanimous, which is looking likely. Zzzzzz. But Travis has said he would use today to try to flip things in his favor. I’m not sure that will happen, but who knows.

Who do you think will be the first evicted from the Big Brother 23 house? Let us know in our poll below.