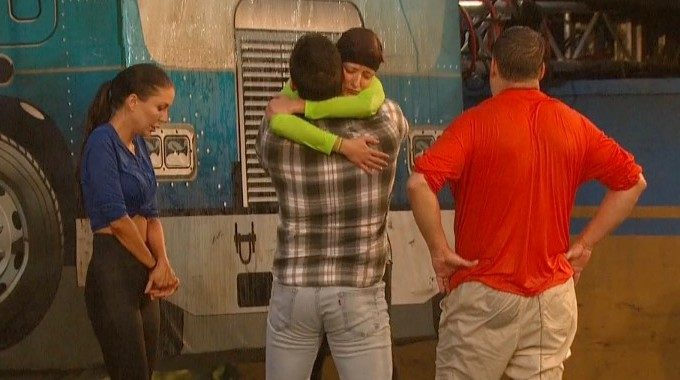 Big Brother 21 is down to its Final Four and we nearly had a very different scenario as Nicole Anthony and Cliff Hogg had to weigh their decision to either vote out Holly Allen or Tommy Bracco. Eventually, they settled on evicting Tommy but not before they apparently made some pretty sweet deals for themselves.

Feeds were blocked out for most of Thursday so we’re still piecing together what happened, thanks a lot production, but here’s what we’ve got. Nicole & Cliff were set to vote out Holly, going against their F4, until Jackson and Holly caught wind of the flip and Jackson crafted a pretty smart plan to fool Nicole & Cliff. Jackson convinced they Tommy was playing both sides and was proposing false deals to the pair.

Part of Tommy’s deal to Cliff & Nicole was that he’d be willing to throw this F4 HOH. In that case, it’d be Nicole & Cliff uncontested to secure the win, if Tommy stuck to the deal. They’d have to consider that if they evicted Tommy then Holly would be playing and playing to win. It seems they managed to fix that in a new deal with Holly to keep her.

Flashback to 10:29 PM BBT 9/12 as Holly talks with Jackson. There she confirms what seemed obvious. Holly threw the HOH comp that lasted just a few minutes and lead to Nicole winning HOH. She told Jackson, “I feel absolutely sick that I just had to throw that comp.” She went on to point out that was her kind of comp and she waited all season for it only to throw it when it arrived. Yep.

Cliff was already squatting by the end of last night’s show and then when the Feeds returned he was down and so was Holly. So yes, Holly threw the comp so Nicole could win. Sounds like there was more to that deal then just an HOH comp though.

Holly asked Jackson if he had also agreed to throw the Veto comp. He says he doesn’t remember if he made that as part of their deal [to keep Holly]. Holly says she did make that agreement. Jackson says he doesn’t want to ask for clarification. No kidding.

From later discussions, it sounds like Nicole and Cliff expect Jackson to cut Holly in the next vote. Not so fast. In a later conversation between Jackson and Holly he told her she has had his back and couldn’t turn on her now. Sounds like he’ll break that deal if it comes down to it.

So there we go. Holly made a deal to throw F4 HOH and F4 Veto if Nicole & Cliff kept her over Tommy. Jackson doesn’t know if he promised to throw the Veto but sounds like he did promise to evict Holly over Cliff (Nicole is safe as HOH), should he come down which would only happen if he won the Veto and saved himself. So that’s a little fuzzy if Nicole & Cliff are expecting them both to throw F4 Veto.

Jackson is pretty stressed that they had a good F4 deal going and then Nicole & Cliff renegotiated the deal. Well, I’d say both sides of this F4 made some pretty smart moves then. Nicole & Cliff got themselves a better deal in exchange for what Jackson and Holly wanted in the short term while Jackson did his own smart moves to tarnish Tommy and get him out the door instead. All’s fair in love and Big Brother.

What do you think will happen in the Veto? Obviously Nicole is nominating Jackson and Holly but will they both throw the Veto and let themselves be picked off or will they fight back and try to get Cliff out the door this round? Share your predictions below and then get ready for the Veto comp coming up!