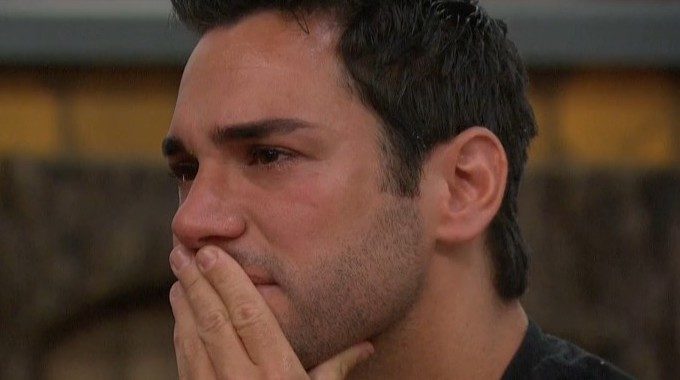 Tommy Bracco has carried one of the big secrets of Big Brother 21 rather successfully so far this season but decided on Saturday to share the news with part of the house that he has a deep-rooted connection to the recently evicted Christie Murphy.

With the walls of the game closing in on Tommy he decided to make the bold move on Saturday of telling Jackson and Holly that he and Christie knew each other from before the series. Flashback to 1:11 PM BBT on Saturday, Sept. 7th on your Live Feeds (get the Free Trial now) to watch it play out.

Tommy is sitting with the last showmance in the HOH room when he suddenly shifts the discussion. “I want to tell you guys something, that I knew Christie before coming into the house,” explains Tommy. Jackson and Holly are quickly stopped in their tracks. Holly had been railing on Tommy about how awful she found Christie to be as a justification for why Holly had voted her out and now she realizes how far she had wedged her foot in her mouth. She profusely apologizes for her comments.

Tommy asks the pair to keep this secret between the three of them as he continues. He details that Christie had dated his aunt and with that connection, he “had to go with it”. Presumably, he means “it” as Christie’s undesirable behavior. He’s trying to shift the blame of his game moves onto Christie’s back, suggesting he didn’t want to do those things but was pressured into it.

Feeds had cut for a moment before coming back then once Tommy starts to give details on which aunt it was (not the one in his photos from home) the Feeds take a more extended cut. After quite awhile the Feeds return to Nicole alone downstairs on all cams. I would guess Tommy’s aunt didn’t sign her release or withdrew it. It’ll be interesting then if they can even use this discussion on the show.

Later we see Tommy depart the HOH room and we don’t know what was said there since the Feeds were off that room but Tommy was immediately called to the DR. That left Jackson and Holly to discuss the situation. Flashback to 1:51 PM BBT as Jackson makes his own disclosure in the realm of preexisting connections.

So we already knew Holly and Kat knew each other, but Kat had another connection in the house. Holly notes how Tommy had to carry that secret for months while Kat revealed hers on Day 3. Jackson admits that he had met Kat before back in Dallas and knew her from before the season. Holly can’t tell if Jackson is kidding. He says he’s not.

Good grief, Kassting. Millions of people to choose from and nearly a third of the cast had some connection to another HG. Ridiculous.

So we’ll have to see what Holly and Jackson do with this info. So far they haven’t told Nicole and Cliff but given yesterday’s turn of events with the Veto we just might see them play that card against Tommy. Having a sure-thing vote in the Jury wouldn’t be something I’d particularly want to go up against, but then again is that better than a F2 that wouldn’t dream of keeping you? Hmm. What do you think?