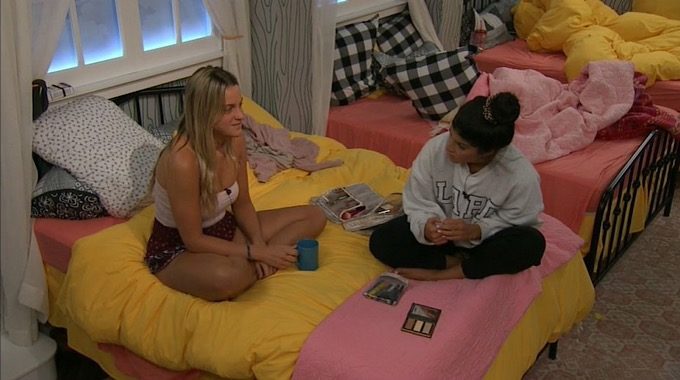 It is Power of Veto day in the Big Brother 21 house and now that the Power of Veto Players have been picked, we have a pretty good idea of what could happen going forward. Read on to get all the details of who is playing and what they plan to do if they win Saturday’s Power of Veto comp!

As we all know, Jackson is the HOH this week and he has nominated Christie and Analyse for eviction this week. We know that Christie is Jackson’s target this week and Analyse is simply a pawn because Jackson knows that Analyse will vote to keep Christie on Thursday if she is still sitting on the block. Nick, Cliff, and Holly have been picked to play alongside them and in the last 24 hours, there has been a lot of talk inside the house about what they would do if they won.

Nick has been working pretty closely with both sides of the house but has told Analyse that he would take her off the block if he won the POV. When Nick went to Jackson last night, he told Jackson that he didn’t want to win the POV. Jackson told him that if he did win, he would prefer Nick take Analyse off the block. Jackson also let Nick know that if he does win and use the POV, Tommy would be his renom choice on Monday at the POV Ceremony.

Christie and Analyse don’t believe that Nick would actually use it to save either of them because they have noticed that Nick has been pretty chummy with Jackson and Holly. Nick is a little sick of being questioned when all he is doing is playing his social game like everyone else.

As of right now, it looks like unless Christie wins today’s Power of Veto comp, she will be on the block on Thursday night. If Analyse or Nick win, then Tommy will be sitting next to Christie on Thursday, but if Cliff, Holly, or Jackson win, the noms will stay the same.

Who do you want to see win the Power of Veto later today?