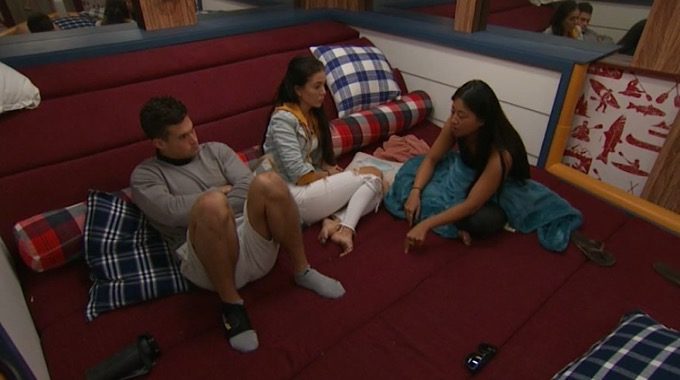 Yesterday was the first full day of Bella being on the block and she had a lot of work to do if she planned on trying to stay in the Big Brother house. She prepared her campaign speech and pretty much told everyone the same things. She started with Holly and Jackson and worked her way around the house. She really focused on Jess and Kat in hopes that she could get them to vote in her favor because with Nicole, she would have enough for a tie.

With Jackson and Holly, Bella started off with an apology of sorts. She tells them that she started this game really hard really fast because she didn’t trust anyone and then before she knew it, it was chaos. The rest of her campaign wasn’t really a campaign against Jack, but more a campaign on why keeping her would be more beneficial for them.

Her first point was that Jack is a bigger physical threat and there are a lot of physical competitions coming. She mentions his track record with the comps so far and says that she hasn’t won a single thing so far. She mentions that Jack is also very good at the mental comps, notes that he came in second in this past HOH and that he has social connections with most of the HGs.

Her second point was that she is a bigger target. If they kept her in the house this week, chances are her and Nick would end up on the block next week leaving everyone else safe for next week and then Nick and Sam would probably go up the following week keeping everyone else in the house safe for at least the next two weeks. It also ensures that they have a better chance of playing this game going forward.

Jackson and Holly agreed that Bella made some really good points in her pitch. They seemed to consider it for a split second, but Jackson told Holly that he would rather duke it out with Jack one on one instead of blindsiding him with a flip vote. In Bella’s pitch to them, Bella even mentioned that they can blame the votes on someone else to protect themselves.

Bella already has two votes with Nick and Sam, she thinks that Nicole might vote in her favor, but she would still need Kat and Jessica in order to tie. Cliff has told her that he would break it in her favor, but also seems worried about betraying the trust of the Six Shooters.

What do you think of her campaign approach? Do you think that she has a shot of convincing enough people?