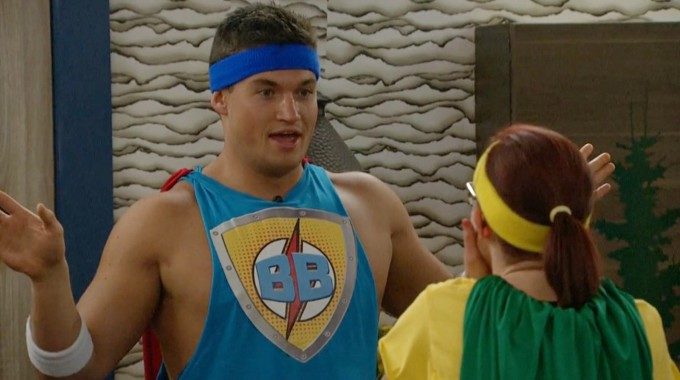 Saturday was Veto Day in the Big Brother 21 house and after a slow roll start to the day the game ended up on its toes when the night wrapped. Dramatic PoV results mean we could have an exciting week of Big Brother on our hands, after all, that may deliver some surprises along the way. Read on to find out what happened Saturday on the BB21 Feeds!

10:00 AM BBT – Holly chats with Tommy and says she will play hard for the Veto but not that hard because her game doesn’t depend on it.

11:20 AM BBT – HGs hanging out and playing Backgammon.

11:50 AM BBT – HGs chatting about being away from home and missing friends and family.

12:15 PM BBT – Tommy wonders if Christie was the villain this season.

12:50 PM BBT – Nicole says she’ll be ready to pass out in the comp because she’s going to play so hard for it. Her strategy for BB Comics is to get the order right first and then study the differences.

12:55 PM BBT – Holly has been complaining to Tommy about Christie and her issues with her.

1:11 PM BBT – Tommy admits to Holly and Jackson that he knew Christie before the show. He asks they not share this with Nicole and Cliff. “Her ex-girlfriend is my aunt…” and Feeds cut. Feeds return briefly and Tommy explains “he had to go with it because of who she was.” Holly asks if it was the aunt in his photo and the Feeds cut again.

1:45 PM BBT – Tommy is back downstairs and gets immediately called to the DR.

1:50 PM BBT – Holly talks with Jackson and questions other potential connections in the game they don’t know about. Holly mentions her connection (Kat) telling everyone on Day 3. Jackson finally admits that he also knew Kat. Holly thinks he’s kidding. He’s not. Jackson explains he met her before in Dallas.

2:10 PM BBT – Tommy and Holly are nervous about the upcoming comp and how they’re playing for their game survival.

7:00 PM BBT – Feeds are back and Nicole is wearing the medallion.

7:05 PM BBT – Nicole promises Cliff she’s going to save him. She says she won’t chance it with her #1 so he’ll be coming down.

7:10 PM BBT – Cliff and Nicole celebrate in the Storage room.

7:20 PM BBT – Jackson worries to Holly that Nicole could decide to side with Tommy. Holly doesn’t want Nicole to use the Veto. Jackson admits it’s a smart game move but doesn’t think Nicole would do it.

7:25 PM BBT – Holly admits she hadn’t thought this out and didn’t really want to win the Veto.

8:20 PM BBT – Nicole mentions to Cliff the possibility of keeping Tommy over Holly. He doesn’t like the idea and says Tommy is more of a threat than Holly.

8:25 PM BBT – Nicole plans to tell Jackson she doesn’t intend any funny business but she has to use the Veto on Cliff. Cliff says he’ll reiterate that safety to them as well.

8:30 PM BBT – Cliff again suggests Tommy is a bigger threat than Holly so he needs to go over her.

8:35 PM BBT – Jackson stops by and Nicole lets him know her plan. He’s okay with it and not surprised nor is he worried about them doing something against him with Holly on the Block.

8:40 PM BBT – Holly has joined the group. Nicole informs her of the plan to use the Veto on Cliff.

9:15 PM BBT – Jackson notes the irony of Holly’s first trip to the Block being on his HOH week.

9:50 PM BBT – Cliff camtalks his confidence in having made a F2 with Nicole.

10:35 PM BBT – Jackson is stressing not being able to compete for HOH next round.

11:35 PM BBT – Jackson is studying faces and features in anticipation of a face morph comp.

11:45 PM BBT – Holly says she’s disappointed in herself for her Veto performance.

12:05 AM BBT – Nicole talks with Tommy about being happy she won the Veto but stressing that Jackson now has to put up Holly. Tommy tells her she knows who his target would be if he stayed. Nicole suggests she’s considering options. Nicole suspects Jackson and Holly would have taken a shot at her if they had the chance now.

12:45 AM BBT – Nicole reliving the event early in the season when she was shut out and no one would talk to her. Tommy is trying to remember what happened.

1:00 AM BBT – Tommy says he was okay with Christie being evicted when she was against Sis but not Nick.

2:10 AM BBT – Nicole mentions she’s surprised she could win an athletic comp because that’s not her thing. Holly notes they’ve both won the same number of comps now.

2:50 AM BBT – Nicole is debating the options of splitting up the showmance. She knows Jackson and Holly will be protecting either other in the final rounds.

2:55 AM BBT – Holly wonders if Tommy is lying about knowing Christie. She notes he blamed his actions on having to align with Christie. Holly points out Tommy is an actor.

2:55 AM BBT – Nicole speculates her odds are better against Tommy than against Holly.

3:05 AM BBT – Nicole continues to debate her options of evicting Holly instead of Tommy. She didn’t come here to get 4th or 3rd and thinks her best chances may be against Tommy instead of the showmance.

3:10 AM BBT – Nicole points out that she and Cliff broke up a duo in the DE and now they can do it again.

3:40 AM BBT – Nicole has continued to go back and forth on the idea in her camtalk. She decides to sleep on it.

What a night of Big Brother! The Veto results have delivered us the biggest chance for drama with Cliff coming down and Holly going up. We may or may not see a F4 betrayal but either way the tension will be there and that means drama going into the live vote. Any other results and we would have had a no-brainer week. Now, not so much. What do you think Nicole and Cliff will do come Thursday night?