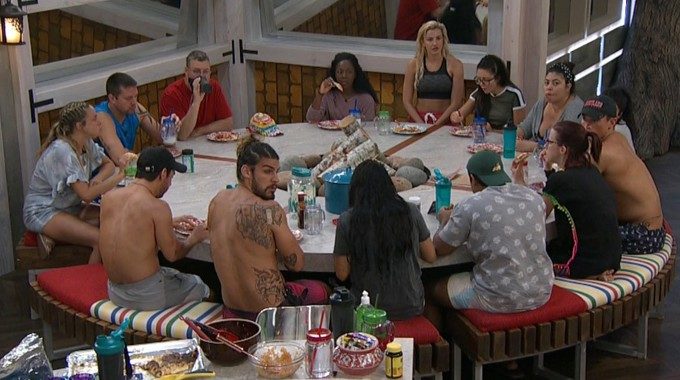 The Big Brother 21 houseguests set their backdoor plan in motion Sunday at the Veto Ceremony, so now it’s up to the two nominees to work on saving themselves. And they both got to work. Is the target set in stone or are there cracks forming around the house that he can use to his advantage? Read on to find out what the latest plan is and who plans to nominate whom next week.

10:40 AM BBT – Isabella and Tommy wonder when the Veto meeting will happen. Isabella is feeling good that it won’t be her as the renom.

12:05 PM BBT – Feeds return from the Veto ceremony. Cliff was saved and Ovi was renom’d.

12:10 PM BBT – Christie tells Kemi she wants to keep Kat to keep the girls strong but will tell Ovi he’s a pawn.

12:15 PM BBT – Christie explains to Ovi that she was afraid to put up Kemi as the pawn.

12:25 PM BBT – Jackson tells Ovi he’s going to vote against him as a sympathy vote for Kat.

12:35 PM BBT – Nick definitively tells Jackson he does not want to keep Ovi.

12:55 PM BBT – Christie claims to Kemi that she was surprised by Sam using the Veto.

3:30 PM BBT – Kemi camtalks that Jack and Jackson are her top two picks for noms if she wins HOH but still needs to pick a third target for backup. She won’t put up any of the girls.

4:15 PM BBT – Analyse, Christie, Holly, Jack, Jackson, and Tommy are working on a name for a six-person alliance.

4:35 PM BBT – Ovi says he can pull this off and believes Nicole will get Kemi and Jessica to save him. He believes Jack is working to help him.

4:45 PM BBT – Kat tells Holly it’s dangerous for anyone to discuss Girl Power while she’s on the Block or it could hurt her.

5:20 PM BBT – HGs agreeing they will vote out Ovi as Kemi is not a threat. Nicole, Jessica, Bella, Sam, and Nick are there.

7:04 PM BBT – Kat asks Jack if the plan has changed this week. He says Ovi is going home and that her going home is not what the house wants. He tells her that he has her back and he could only see her maybe having two votes cast against her.

7:07 PM BBT – Kat tells Jack that Kemi was telling her that there might be four votes against her. Jack tells her not to listen to Kemi and says that she is poison.

7:15 PM BBT – Ovi is campaigning to Jessica. He tells her he knows she’ sin a tough spot since she also likes Kathryn a lot. He tells her if he gets any kind of power he will have her best interest in mind. He tells her he wants to know if he’s going and just doesn’t want to be blindsided.

7:33 PM BBT -Nicole asks Jessica what she’s thinking after talking to Ovi. Nicole says he said he has Jessica and Kemi’s backs. Jessica thinks Ovi is lying about having their back because just the other day he was all about getting Kemi out. Jessica and Nicole agree that focusing on working with the girls makes more sense for them both.

7:40 PM BBT – Christie tells Ovi that if the vote is a tie she’d break it to keep him. She tells him he has her word on that.

7:45 PM BBT – Kat tells Christie she doesn’t know what to even think now. Christie says Kat is fine and she doesn’t see any way she goes home this week. She says Kemi being up could have been bad for Kat, but she doesn’t think anyone will flip to keep Ovi.

7:46 PM BBT – Jack tells Jackson and Nick that Kemi is trying to flip the votes for Kat to go. Jack says Kemi could be the second dumbest Big Brother player in history next to only Kat.

8:05 PM BBT – Jack says if Kemi wins next HOH he and Jackson are going on the block. Nick says he thinks he could talk her out of nominating them.

8:25 PM BBT – Isabella is giving Ovi advice on how to handle the rest of the week. She tells him to just act like nothing is wrong.

8:28 PM BBT – Nick tells Kemi he doesn’t know who he would put up next to Kat on the block if he wins HOH next week. Kemi asks him to promise to not put her up with Kat. He says he promises. He tells her that if it comes down to them for the next HOH he would throw it to her because she wouldn’t be afraid to nominate people.

8:45 PM BBT – Cliff tells Kat that he isn’t sure who the target is supposed to be but he can’t imagine her going over Ovi. He tells her she’s more well connected in the house.

9:50 PM BBT – Nick and Analyse are having an annoying talk about whether or not she likes Jack. Then Analyse turns the talk to Kemi and tells Nick that she hates that b*tch.

10:07 PM BBT – Jackson says Kemi really makes him mad and he can’t stand the way she plays the game.

10:15 PM BBT – Kemi tells Ovi she was just as surprised about the Veto being used. Ovi says he feels like he’s in a good spot.

11:20 PM BBT – Christie and Jack think they can wield Kat if she stays and get her to nominate their targets for them.

11:30 PM BBT – Ovi tells Cliff he feels like the HOH crew is being honest and he can trust them.

11:45 PM BBT – Jackson suggests to the group that they throw HOH to Kat so she’ll do what they want.

1:00 Am BBT – Tommy promises Ovi the HOH crew has his back and that he’s good with Tommy.

1:25 AM BBT – Jessica, Kemi, and Bella talk about Jack. They don’t like Analyse bringing herself down with him. Kemi notes Ovi needs to go this week. The ladies share stories about Jack and confirm he’s been trying to cause trouble.

1:45 AM BBT – Nick came by and discussed how Ovi thinks he has the votes or is close.

2:00 AM BBT – Bella, Jessica, Kemi, and Nicole form an alliance, The Black Widows. Kemi isn’t there at the moment but soon returns and learns about their new alliance.

2:15 AM BBT – Kemi advises the Widows they should not pull in Tommy. She thinks he’s with the guys.

Well Ovi is done, right? I don’t see him pulling the numbers but we are still a few days from the vote so anything is possible. It’s too bad about his power getting ready to exit in his back pocket. Ah well. On to see what happens Monday and if there are any opportunities for him to pull off a vote shift.