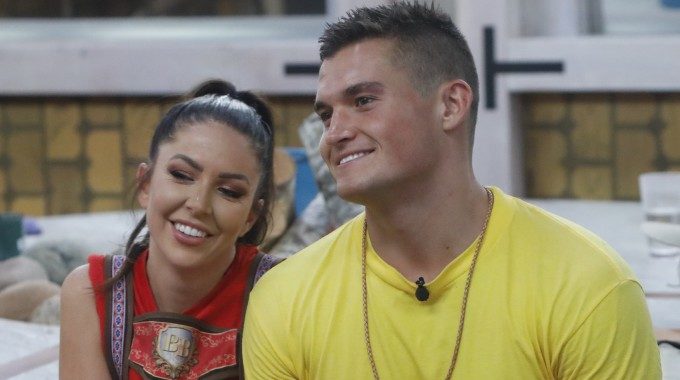 Jackson Michie and Holly Allen have effectively secured their spots in the Final 3 of Big Brother 21 against Nicole Anthony and they’ve got a plan to help make sure they’re sitting in both spots of the F2 come next Wednesday’s season finale.

The Final HOH is three separate parts as we’ve traditionally seen them with Round 1 as an endurance comp, Round 2 a combo physical and mental (arrange events in a physically challenging setting), and then Round 3 as a live Q&A on finale night. With the pair of Holly and Jackson going into this together they’re going to need a plan and lucky for them, they’ve got one.

Flashback to 1:55 AM BBT Sept 19th Cams 1/2 to find Holly and Jackson plotting a few more moves before they turn off the lights.

Jackson tells Holly that if the first round is an endurance comp then once Nicole drops then he’s going to drop next so Holly can take that round. He says he wants to face Nicole in the second round which is probably a smart choice for the pair.

Nicole has the game smarts but Jackson is hard to beat on his speed, which the second round is expected to require. I would favor Nicole over Holly if those two were matched up in the second round but against Jackson I’d expect him to have an edge. Anything is still possible though and Jackson could slip up.

Letting Holly take the first round so Jackson has a better shot at the second round is a strategic way of thinking ahead more than just for the immediate security of one of them holding a spot in the third round. Should they sweep the first two rounds then they’re a lock for the F2 no matter who wins R3. Jackson is 100% taking Holly to the end and I’d guess Holly is 99% making the same move, especially after Nicole and Cliff told her they’d vote for her over Jackson. I might not have made that comment to Holly if I was Nicole but too late now.

Should Holly win R1 and Nicole take R2 then we’ve still got ourselves a game here so let’s hope it’s a split decision heading into R3 or we could have a snoozer for suspense in the final days of Big Brother 21!

We’re waiting to see if we’ll get to watch tonight’s Round 1 HOH comp on the Feeds which would be great but hasn’t happened in a few seasons so don’t hold your breath. After that Round 2 will be in the next few days, also off the Feeds, and then Round 3 will be live next Wednesday night.

Who do you hope wins Round 1 tonight? Should Jackson be throwing anything? Can Nicole hang on for another critical victory for her game? We’ll find out soon enough!