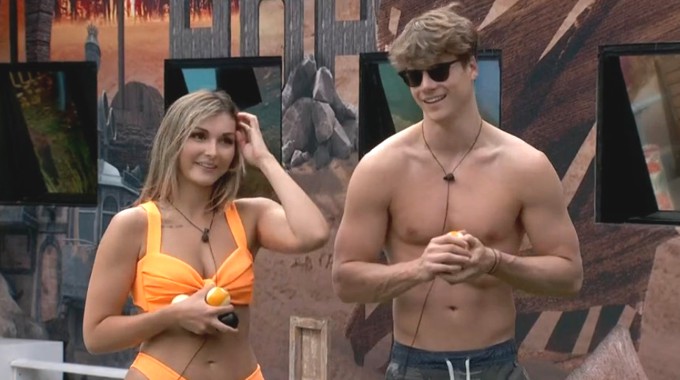 Oh Big Brother 24, you were going so strong and doing so well as you fended off the usual showmance pitfall of each season. I guess it couldn’t last forever, or really we just needed twelve weeks, but anyway. Last night on the Feeds we saw the Kyle and Alyssa showmance finally take shape when late into the night the couple curled up in bed, cuddled, and eventually kissed.

It seems to happen every season. Some pair of Houseguests decide to throw caution to the wind, along with possibly the prize money and pursue a showmance within the confines of the Big Brother walls. This year that couple is Alyssa Snider and Kyle Capener and it took until Week 4 of BB24 to see it happen.

Flashback, or just take our word for it, to 10:26 PM BBT 8/1 on Cams 1/2 (sign up for the Free Trial). You’ll find Alyssa and Kyle cuddled up in the open bedroom with Daniel sleeping in the next bed. They’re whispering, flirting, and touching when Kyle rolls over and plants one on Alyssa. After a few moments, they stop and roll back to more chatter and flirting.

Making that move in the wide-open bedroom. That’s one way to get caught. The other day we saw on the Feeds when Kyle was pulling Alyssa out of the car room so they wouldn’t be caught back there just talking and not even doing anything, seemingly because he thought it’d be suspicious, but making out in the open bedroom is apparently less dangerous. Okay.

The pair met up again later that night at 2:20 AM BBT 8/2 on Cams 1/2. This time they’re in the Jetsons room with Indy sleeping in the next bed. Same as before, the couple cuddles and whispers before things turn to kisses. Then there’s a debate over who kissed who first and more cuddling.

It’s a surprising turn of events after Kyle was so adamant that he would not get involved in a showmance. He pushed Alyssa away for weeks and then just days after he was angling for her eviction this week over Nicole, poof, his outlook changed and he’s now jumping into the showmance with both feet.

So what do you think this will do for Kyle’s game and for his position in the Leftovers (which Alyssa is not a member)? Then what about Alyssa? Who is getting the boost here? Alyssa hasn’t been nearly as active in the game as Kyle and now he’s about to tether his game with hers. We’ll have to see what the guys think of this one and how long before someone decides they need to be split.