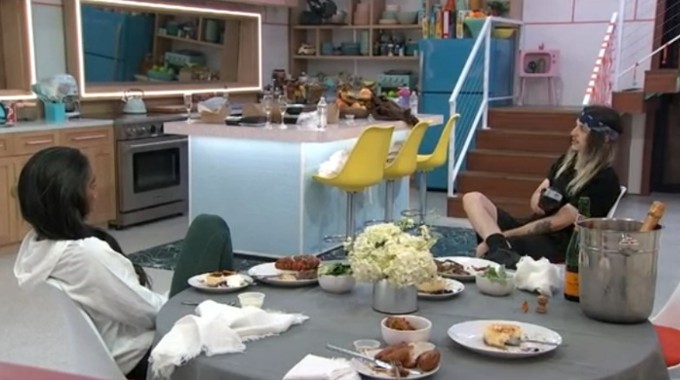 It’s officially the Final Week of Big Brother 24. The Final 3 is in place and we already know who won Part 1 of the Final Head of Household competition. What we will be seeing over the next day or two is a lot of talks and promises, but we won’t really know who is being truthful until the finale Sunday night.

11:37 PM BBT – Feeds return from the first part of the final Head of Household competition.

11:40 PM BBT – HGs discussing the comp had a spinning component. Turner is surprised he won. Taylor hopes they will open the HOH room back up. (Nope.)

11:46 PM BBT – Monte is called to the DR, leaving Taylor and Turner alone to chat.

11:50 PM BBT – Turner tells Taylor he thought she would win this first part and figured Monte was too big for it to work for him.

11:52 PM BBT – Turner says he thinks he knows how each vote will go except for Terrance’s. Taylor tells him Terrance will vote for Monte.

11:54 PM BBT – Taylor also thinks Michael will vote for Turner over him because Michael cares about the integrity of the game. She adds that Brittany thought Turner would win but Turner disagrees and says he expects to lose against both of them. Turner says he probably only has Kyle’s vote and was relying on Alyssa getting to the end with him.

12:05 AM BBT – Turner is telling Taylor the Jury all love Monte but hate him. He’s trying hard to make himself more appealing to take to F2 over Monte.

12:10 AM BBT – Taylor lets Turner know that Brittany finally admitted to being the vote against her. Taylor says she was doubting Turner over the vote.

12:20 AM BBT – Turner expects AFP will go to Joseph or Taylor. Taylor says he could be right for her on AFP but not to win the game, she doesn’t think that’ll happen.

12:30 AM BBT – Taylor and Turner talk about finding little things in the house to take as a memento.

12:45 AM BBT – Turner and Taylor fondly recall their Memory Lane dinner for earlier tonight. They say how good it was.

1:20 AM BBT – Monte returns from DR. Turner is immediately called in.

1:35 AM BBT – Taylor is rereading her letter from home. Monte is getting a shower.

2:00 AM BBT – Taylor is napping. Monte boxes up all the leftovers from dinner.

2:15 AM BBT – Monte is off to bed. Taylor is cleaning up the kitchen. Turner is still in DR.

2:40 AM BBT – Taylor has been sitting in the kitchen, studying the Memory Wall, and go over all the season stats for who did what.

Turner nabbed Taylor’s comp here in round one. I definitely expected her to win the endurance comp but now she and Monte will have a second chance in Round 2 on Friday. We’ll be watching for more discussions on the Feeds for F2 plans but you never really know until someone has to announce their decision. We heard so much smoke being blown between Taylor and Turner as they both jockeyed for the prime position to be taken by each other over Monte, but how much of it was honest?