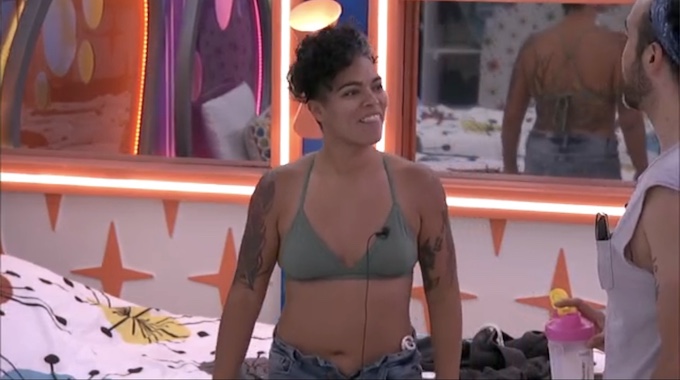 What a day inside the Big Brother 24 house as the Veto Ceremony came and went and one duo inside the house thought that they got one over on Monte when they went against his plan. Little do they know, the target this week isn’t who they think it is and we are looking at another blindside inside the Big Brother house. Which BB24 houseguest is in for a big surprise? Keep reading to find out!

9:15 AM BBT – Kyle and Monte are touching base on the best course of action for today. Kyle wonders if he should go get Daniel and tell him they should talk to Monte. Kyle also says that he would like to tell Alyssa and Indy so they aren’t blindsided and adds that he isn’t going to lie to Alyssa about her being the target.

9:20 AM BBT – Monte goes to talk to Daniel and tells him that he got some information that he is feeling kind of paranoid about. He asks Daniel if him and Nicole could come up and talk when she gets up.

9:25 AM BBT – Daniel joins Kyle outside and tells him that Monte pulled him aside and told him that he knows that they probably want to use the Veto but he heard some things last night and wants to talk. Daniel says that he will hear him out and fill Kyle in. Kyle is playing dumb and is wondering what could have happened to have Monte change his mind about using the Veto.

9:30 AM BBT – Kyle tells Terrance that it’s difficult to make a decision that is going to impact someone’s game. Terrance tells him he has to do what’s best for him. Kyle says he is constantly wondering who he can trust.

9:43 AM BBT – Kyle is telling Nicole about how Daniel came to him in the backyard saying that Monte wants to have a conversation with him before Veto Ceremony. Daniel walks in and says that he actually wants to talk to both of them (D&N) and thinks it’s weird that he doesn’t want to talk to Kyle too.

9:45 AM BBT – Nicole tells Daniel and Kyle that Monte, Joseph, Taylor, Michael, Brittany, and Turner all upstairs until 4 AM BBT. Nicole says that the house is officially split. They think that they have realized that they don’t have enough numbers to make a bigger move.

10:00 AM BBT – Monte tells Nicole and Daniel that he knows that the two of them are close and Daniel has the power to use the Veto. Monte reminds them of the conversation they had about votes and the six people they were confident they had. Monte mentions that he did follow up. He says that he thinks that Alyssa told Jasmine all about Po’s Pack and who was in it. He says that this impacts Jasmine’s trust in Nicole because she was in that alliance.

10:05 AM BBT – Monte says that this makes him really nervous about putting Nicole on the block even if Taylor is his target.

10:15 AM BBT – Michael tells Kyle that if Daniel decides to use the Veto it’s on him at this point. Kyle says that they can still BD Nicole if he chooses to use it.

10:20 AM BBT – Daniel tells Monte that he is going to go talk to Kyle about the whole Alyssa thing. Daniel says that keeping Nicole off the block works for him.

10:25 AM BBT – Indy and Jasmine are talking about how Nicole is trying to make it look like they are super close, but they aren’t. Indy says that she just hopes that the Veto is used so they can plan going from there. Jasmine says that it is definitely being used.

10:27 AM BBT – Daniel and Nicole head downstairs and both say that Monte is the worst liar.

10:30 AM BBT – Daniel is filling Kyle in on the conversation with Monte. He tells Kyle that he could tell Monte was lying the whole time.

10:33 AM BBT – Daniel and Kyle are going through the votes and Daniel says that he is trying to keep the noms the same because he wants to keep Taylor and realize they don’t have the votes to get Nicole out.

10:35 AM BBT – Nicole tells Taylor that she doesn’t know what kind of magical powers she has, but she would like to be included in on something. Taylor tells her that the only thing she said to Monte was that putting them both up is going to be explosive in the house and even though she is the target, she is making more personal relationships in the house. She adds that either of them going is going to be bad for his game.

10:37 AM BBT – Nicole tells Taylor that if they go up, Nicole is clearly going home. Nicole says that she just said it herself, she’s making more personal realtionships in the house. Taylor says that’s assuming her relationships are stronger than Nicole’s. Nicole is playing it off like she doesn’t know that Daniel wants to use the Veto.

10:40 AM BBT – Nicole is telling Michael that Monte doesn’t want Kyle or Daniel to use the Veto because Jasmine doesn’t want Nicole in the house anymore. Nicole is playing it off like she is worried, and says that if Daniel and Kyle decide to use it, she could go home. Meanwhile, Daniel is telling Kyle that he wants to use it.

10:42 AM BBT – Michael tells her that he wants Nicole in the house. Nicole is upset because Indy, Alyssa, and Jasmine have all been making her feel like they have her back. When they don’t.

10:50 AM BBT – Kyle runs upstairs and tells Monte that their plan backfired because Nicole and Daniel smelled BS.

12:28 PM BBT – Feeds are back from Veto Ceremony. Daniel and Kyle used the Veto and Nicole and Taylor went up as renoms.

12:32 PM BBT – Daniel tells Joseph and Terrance that he is hoping that Monte isn’t upset that he didn’t go through with his new plan.

12:33 PM BBT – Nicole tells Daniel that she told Jasmine, Alyssa, and Indy that she is a cop. Daniel thinks that was smart because that will earn trust.

12:35 PM BBT – Joseph is checking in with Taylor and Brittany.

12:43 PM BBT – Nicole tells Daniel that she baited Taylor and Michael right before. Daniel says that he is done with these clowns.

12:50 PM BBT – Daniel is camtalking about how this is why you shouldn’t get too comfortable. Adds that he loves this game and that it’s unbelievable that he gets to be here.

12:51 PM BBT – Joseph is making his rounds and retelling his conversation with Daniel to Turner. Says that Daniel dug his best friend’s grave.

12:55 PM BBT – Daniel warns Indy to be careful what she says to Joseph. She says she knows. Joseph walks back in.

1:30 PM BBT – Kyle tells Joseph that Nicole and Daniel knew that Monte was lying from the start. Joseph fills Kyle in on the conversation he had with Daniel.

1:45 PM BBT – Michael tells Brittany that if the vote comes out 6-4 with Nicole leaving, they need Daniel to believe that Jasmine, Indy, and Alyssa voted her out.

2:00 PM BBT – Daniel tells Indy that Monte is throwing Nicole and him under the bus saying that they don’t trust them (Indy, Alyssa, and Jasmine). Daniel says that this whole lie was based on a lie that Ameerah told Jasmine not to trust them.

2:03 PM BBT – Nicole is telling Terrance about everything that transpired before the Veto Ceremony.

2:07 PM BBT – Daniel is telling Jasmine and Alyssa about Monte throwing him and Nicole under the bus.

2:22 PM BBT – Jasmine tells Monte that Daniel just came to her and told her that he (M) told Daniel and Nicole that Ameerah whispered in her (J) ear not to trust them (D&N). Monte tells her that Nicole was the one who told him that. Jasmine says she just wants to relax and enjoy the day.

2:30 PM BBT – Daniel tells Terrance that he knows that he is Festie Besties with Monte and Joseph, but he needs him to know that he and Nicole will never turn on him.

2:32 PM BBT – Nicole tells Michael that she is closer to Terrance than she is to Daniel. Michael wonders if Daniel is covering for Kyle wanting to take Alyssa down. She says she doesn’t know, but they are Festie Besties.

2:40 PM BBT – Michael asks Nicole if she has put any thought into who she is going to join. She says she doesn’t know, she just wants to stay in the game. He says that he would love for her to join him and Brittany, but he understands if she has to use that as leverage in her talks.

2:42 PM BBT – Jasmine asks Terrance how he is feeling about his vote this week. He says he doesn’t know, he’s trying not to vote with his heart (Taylor to stay), but at the same time wants to respect Monte’s HOH (vote Taylor out).

2:47 PM BBT – Monte is telling Terrance about everything that Jasmine and the other girls told him about Nicole and then about his conversation with Nicole and Daniel this morning.

2:51 PM BBT – Terrance tells him that Daniel went to him and told him that Monte is mad at him for using the Veto. Terrance says he is still confused as to why Daniel used the Veto when Monte told him not to. Especially when he’s supposed to be protecting Nicole. He knew that Nicole would go up and that there was a chance that she could go home.

3:00 PM BBT – Nicole is telling Michael that she is really sad because she saw herself going really far in this game.

So regardless of the plan being to keep the noms the same and take Alyssa out this week, Daniel and Nicole decided that they weren’t going to believe Monte’s warning. Monte isn’t made either way and the Leftover alliance will still come out on top, but Nicole and Daniel are convinced they have the votes to keep Nicole in the house this week when they don’t. This is going to lead to another epic blindside on Thursday, but this time at least Monte could tell Daniel that he tried to warn him.