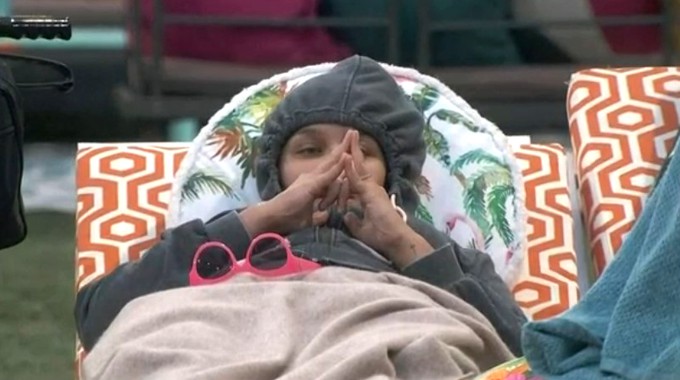 It isn’t a Veto Day on Big Brother without some drama or excitement. Saturday delivered as the Leftovers continued their march toward the latest plan and a surprise attack on the other side, but with the Veto in play anything could happen. Sure enough, the Veto comp arrived and introduced another scenario that could put a bump in the road.

This week’s target is starting to wise up and scrambling for support and votes ahead of Monday’s Veto meeting. Too little, too late, right?

8:56 AM BBT – Feeds are back as players were picked. Daniel & Kyle are the add-ons for Veto this week.

9:00 AM BBT – Jasmine is upset with Turner because he isn’t getting her things, or making her food, or taking care of her while she’s a HN. (Turner is also a HN.)

9:05 AM BBT – Alyssa tells Jasmine that if Kyle wins Veto and doesn’t save her then she will come after him and he’ll have regrets.

9:35 AM BBT – Alyssa tells Monte that she’s worried about Nicole. She doesn’t trust Nicole because Nicole says she’s fighting for the girls then lies to her face.

10:00 AM BBT – Indy and Monte have been talking game. He says it sounds like she may be suspicious of Nicole. Indy says Nicole may be coming for Joseph first. Indy telling Monte that Nicole is paranoid and afraid she’s going to get blindsided like Ameerah did. Monte points out it was Nicole’s choice to pair with Taylor.

10:25 AM BBT – Jasmine tells Joseph that Ameerah warned her, on her way out, not to trust Daniel or Nicole.

10:30 AM BBT – Monte tells Michael that Alyssa came to him and asked if Taylor was still the target because she (A) was feeling strange about Nicole and wasn’t sure she trusted her.

10:40 AM BBT – Nicole tells Monte if he decides to go for a different target (than Taylor) then she’ll support him on that too.

11:00 AM BBT – Nicole tells Monte she wants to go after Brittany next once they get out Taylor this week. She says Brittany offered her and Daniel to be their spy on the second day.

11:03 AM BBT – Indy and Jasmine feel hurt that Ameerah and Alyssa were in Po’s Pack and bailed on Girls Girls. Jasmine laments how Ameerah didn’t pick her as a pair.

2:32 PM BBT – Feeds are back. Daniel is wearing the medallion.

3:50 PM BBT – Daniel is alone and using the Chinese checkers board to count votes and go over scenarios.

3:55 PM BBT – Kyle warns Daniel may decide not to use the Veto but will claim he’s going to.

4:10 PM BBT – Joseph tells the group that Turner is sleeping in the car room and has not been feeling well.

4:20 PM BBT – Ants are taking over the house. HGs can’t figure out where they come from.

4:40 PM BBT – HGs discussing the Veto comp and having to guess numbers about features.

4:50 PM BBT – Nicole claims to Jasmine that Ameerah and Taylor were starting an alliance last week. Now Nicole is sure she’s going up on the Block and the guys are planning to BD Taylor. They discuss who they would trust to be in Jury. They both want Daniel and Terrance there.

5:10 PM BBT – Turner says he won’t eat the Slop oatmeal anymore and plans to get by on pickles and liquids for the rest of the week.

5:35 PM BBT – Kyle tells Joseph that Jasmine is upset because he found out about her business back home. He says that Alyssa, Indy, and Jasmine are falling apart.

5:50 PM BBT – Kyle worries to Joseph that Alyssa is suspicious of him and the Ameera vote flip. He wants Alyssa out soon.

6:00 PM BBT – Jasmine tells Monte that Indy is upset at Alyssa and doesn’t trust her anymore.

6:15 PM BBT – HGs are out lounging around the pool and backyard.

6:30 PM BBT – Nicole tells Terrance that she’s sure she’s next. Terrance says it’s supposed to be Taylor and there’s all this work going on to get Taylor out. Nicole says she can’t get anyone to go talk game with her.

6:45 PM BBT – Daniel joins Nicole and Terrance. She warns Daniel that she’s sure she’s going to be the next target. Daniel says he can convince Kyle not to use the Veto.

7:05 PM BBT – Terrance tells Taylor he wants Noms to stay as they are. She doesn’t want to be a Nom again soon. They discuss Nicole going and next Noms being Daniel and Kyle.

7:54 PM BBT – Kyle gets too close to Jasmine’s foot and she’s again in pain. He apologizes and runs to get her ice.

8:05 PM BBT – Michael lets Monte know that Nicole is worried about going up and thinks she can avoid it from happening.

8:15 PM BBT – Daniel retelling Indy about his powers to see ghosts. Indy doesn’t want anything to do with that.

8:15 PM BBT – Monte tells Michael how Jasmine pitched to him a five-person alliance with Terrance, Indy, and Joe. He says he had to say Yes and now they can use that to get more votes against Nicole.

8:35 PM BBT – Monte anticipates Nicole telling him she doesn’t want to go up anymore. Michael says he’ll have to just question why she doesn’t feel safe and tell her it’ll be okay.

9:10 PM BBT – Taylor tells Monte she hopes Julie teases the vote results by saying her name but then that she’s safe, 9-1.

9:25 PM BBT – Nicole pitching an alliance to Brittany and them bringing in Michael.

10:00 PM BBT – Brittany checks in with Joseph to confirm Kyle will use the Veto. Joseph says he thinks he will. Brittany wants Nicole gone.

11:10 PM BBT – Turner and Jasmine comparing notes on their businesses.

11:55 PM BBT – Jasmine and Turner both discuss being in the application process for BB23 and getting close to the end.

12:10 AM BBT – Nicole updates Terrance that she was talking to Brittany for the first time today. She feels like she’s already campaigning as if she’s on the Block.

1:30 AM BBT – Monte tells Joseph he is sure Nicole is going home. Joseph warns him to not feel too cocky about the plan.

3:10 AM BBT – Alyssa is flirting with Kyle and trying to get her hands on him. He’s fighting it and wants to get outside so no one walks in on them.

3:35 AM BBT – Daniel and Nicole going over the votes if she’s up. He doesn’t think they have Michael’s vote and he’s upset with Turner. Nicole thinks Kyle is tight with Monte but Daniel disagrees. Nicole says Ameerah messed up their game.

3:40 AM BBT – Nicole is sure she’s screwed. Daniel tells her not to get paranoid but admits if she goes next then he’ll be right behind her.

3:50 AM BBT – Nicole doesn’t understand how Taylor can be the house enemy and keep staying over everyone. Daniel says he’ll get Kyle’s support and they’ll need Jasmine’s vote too.

4:30 AM BBT – HGs are in bed but Taylor is still up and doing her hair in the bathroom.

Nicole is in trouble and she knows it. Daniel has got his head in the sand if he’s believing anything else is happening here. Kyle can still make the move to force a renom to get Nicole on the Block, but he’s got his own plans to try and get Alyssa out the door sooner than later.