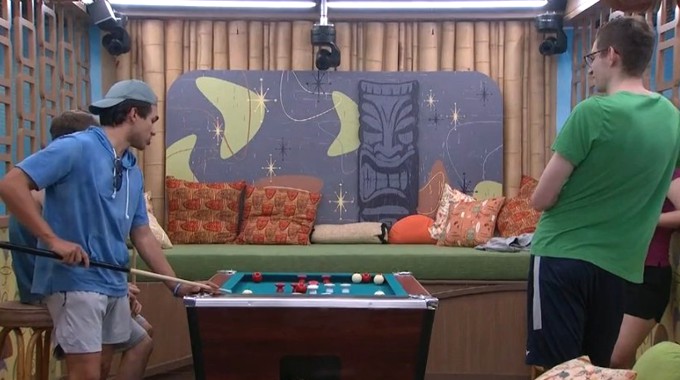 Veto Day returned on Saturday for Big Brother 24 as this week’s target started to feel a little nervous about his big plan as the trust-building pawn. Maybe that wasn’t such a good idea, huh? No choice now but to power through it, try to win some safety, or build up those votes. But that’ll be tough when nearly the whole house knows and is lying to your face. Double oops.

By the end of the day, the BB24 HGs were mostly sticking to the plan with a little wavering and considering alternative options. I’m expecting things to hold tight to the plan though and we’ll be pushing on to Thursday with the pawn out the door.

8:20 AM BBT – Monte and Kyle discuss the issue of letting Pooch get voted out when he’s not after them. They count votes and think they may have it.

9:15 AM BBT – Veto players were picked. Ameerah, Michael, and Terrance will join the comp.

9:45 AM BBT – Monte is working on Ameerah and Nicole to keep Pooch over Taylor. He says they don’t know where Taylor will align but they do with Pooch. Nicole says this is their chance to make a big move. Monte says there’s no reason to wait another week on Taylor. Nicole and Ameerah tell Monte he’s overthinking the situation. Kyle joins and says he doesn’t know how he wants to vote. Nicole says she wouldn’t be as safe as them if Pooch stayed.

10:00 AM BBT – Ameerah asks Indy who she thinks is the bigger threat: Pooch or Taylor. Indy says Pooch and they can get Taylor out later.

10:05 AM BBT – Terrance tells Nicole he wants Taylor out. Nicole updates Terrance the new plan is Pooch. He’s surprised. Kyle goes to Terrance and explains the shift in the plan.

10:25 AM BBT – Indy and Alyssa go over the plan for Pooch this week then Taylor next week with Brittany and Terrance soon after.

10:30 AM BBT – Michael tells Taylor he’d like to save her if he wins Veto but would need to talk with Jasmine.

10:40 AM BBT- Pooch tells Michael if he (M) wins Veto to keep the noms the same and they’ll vote out Taylor.

10:45 AM BBT – Ameerah and Nicole don’t like how hard Monte is pushing for Taylor to go this week and they wonder about him fearing Taylor.

11:10 AM BBT – Brittany lies to Pooch and tells him that she assumes Taylor is still the target over him. Pooch says he’s good with noms staying the same so Taylor can go.

11:55 AM BBT – Jasmine reaffirms the new plan to Terrance: keep noms the same and vote out Pooch. Terrance says he didn’t know. Jasmine reminds him they discussed it in the HOH room.

12:50 PM BBT – HGs hanging out in the living room waiting for the Veto comp.

3:10 PM BBT – HGs excitedly discussing the Veto comp and how messy it was.

3:30 PM BBT – Jasmine wants Taylor to know she’s safe. She talks with Brittany that Taylor that it could change.

3:30 PM BBT – Pooch talks with Taylor about which of them will be safe. After he leaves Taylor laughs that she’s not going.

3:35 PM BBT – Brittany tells Pooch he’s safe and it’s good to be sitting next to Taylor.

3:40 PM BBT – Taylor promises Ameerah that if she (T) wins HOH next week she’ll take out a guy. They discuss Turner going next because he may come for revenge over Pooch’s eviction.

4:00 PM BBT – Michael talks with Ameerah and Nicole that he could save Taylor. They don’t like that idea and don’t think Jasmine wants that.

4:05 PM BBT – Turner is getting nervous after a talk with Ameerah. He says she was slow to say Taylor was the target. Turner is talking with Pooch about votes.

4:50 PM BBT – Pooch asks Ameerah how things are looking. She tells him he needs to be talking with everyone. Pooch is confused and says he did this for the house.

4:55 PM BBT – Ameerah reports upstairs about Pooch’s concerns. Jasmine doesn’t understand where this is coming from with Pooch and his idea that it’s building trust or loyalty. She says they aren’t even working together and it’s only the second week.

5:15 PM BBT – Pooch is worried and talking with Monte and Joe. Pooch is realizing he’s in trouble with the group that’s gathered in the HOH room now because he hadn’t seen them together before and they went silent when Joe went to check with them.

5:50 PM BBT – Pooch asks Nicole and Daniel what’s going on with the votes. He has to get seven and sees that’s a lot. Pooch wonders if Michael will save Taylor so a bigger target would go up. They ask who that could be, but Pooch doesn’t know.

6:00 PM BBT – HGs upstairs discussing the comp. They say it was nearly a tie between Taylor and Michael. Jasmine is relieved that Taylor didn’t win. HGs say they had to tie their feet together so Jasmine couldn’t participate.

6:10 PM BBT – HOH crew discussing how Daniel nominated three HGs but none of them left. They say that definitely hurt his game, but CBS made the call to do it that way.

6:15 PM BBT – Pooch worrying to Michael about the plan who assures him the target is still Taylor. Pooch says he’s okay with staying up on the Block if they need to take Taylor down to put up a bigger target.

6:25 PM BBT – Pooch tells Turner he’ll be upset if Monte ends up going home this week as the bigger target.

6:50 PM BBT – Joe and Kyle discuss next week target options. Kyle thinks maybe Brittany and Indy but would like to see Taylor go.

7:35 PM BBT – Terrance is camtalking in the HN room. He’s waiting to see how this plays out and thinks Turner is going to be upset.

8:15 PM BBT – Turner promises Jasmine safety in general. She asks if he’d put up Taylor again next week if Taylor manages to stay this week and Turner says he would.

9:00 PM BBT – Indy lets the HGs know she will not be volunteering for HN. She’s not worried about the sleeping arrangements but the Slop scares her.

9:10 PM BBT – Turner tells Pooch they’re on the same page with Jasmine because she wants Taylor out too.

10:10 PM BBT – Jasmine tells Terrance that she can’t pass up this opportunity to get Pooch. Terrance wants Taylor out but will go with the house and vote out Pooch.

10:15 PM BBT – Pooch lets Kyle know the good news that Jasmine supports him (P) staying and she wants Taylor out. Kyle says Jasmine is lying to him. They do a vote count and Pooch says he’ll need to working on getting another girl’s vote.

10:45 PM BBT – Nicole and Daniel go over the game. They know the house wants Pooch out but thinks this could be the chance to evict Monte.

11:05 PM BBT – Daniel and Nicole continue to go over strategy and plans. Nicole wants to make sure the big guys aren’t running the game. Daniel knows Monte has plans and he (D) was left out of the big guys’ alliance.

11:30 PM BBT – Alyssa and Taylor look at the votes. They think Taylor will be okay. Taylor wants Monte and Kyle out soon, but knows they can’t move too soon on that.

11:45 PM BBT – Monte is working on Jasmine that Taylor is still a risk to keep. Jasmine tells Monte that Pooch offered him (M) up as a bigger target.

11:50 PM BBT – Pooch asks Kyle to work on Michael for another vote. Kyle agrees to try. Pooch suggests this could be the chance to get out Monte. Kyle says that won’t happen. Pooch thinks Jasmine would keep him over Taylor in the case of a tie.

12:15 AM BBT – Jasmine worries to Alyssa, Ameerah, Indy, and Michael about the plan this week. They tell her it’s still the right thing to do. She shares that Monte said to watch out for Turner. Ameerah wants Taylor to go next week. They bring Daniel in and ask if he’s still okay with voting out Pooch. He agrees to the plan but says Taylor will go after him (D) if she wins HOH next week. They assure him safety if she gets HOH.

12:25 AM BBT – Jasmine tells the group that Taylor told her she’d nominate Monte and use one of the girls as a pawn.

12:40 AM BBT – Ameerah points out they can get out anyone they want this round. Indy says to keep the plan as it is. Jasmine wonders about Joseph instead.

1:00 AM BBT – Indy is worried after hearing from Ameerah that Pooch, Joseph, and Turner want her (I) out before Jury. Indy thins Turner will be lost without Pooch.

1:15 AM BBT – Indy says her goal is for four women at the end and doesn’t think it’d be hard. She wants Terrance as the first Juror.

1:45 AM BBT – Michael is alone in the bathroom and camtalking about the season and things he liked in past seasons. He wants Monte out soon because he’s strong and smart.

Pooch is still in trouble here and at least he is starting to realize so he can work on it a little, not that it’ll matter though. Only thing that could save him is if Jasmine and company decide it’d be better to go after Joseph or Monte this week, but I’m still not seeing that happen. It’ll be Pooch at this rate.