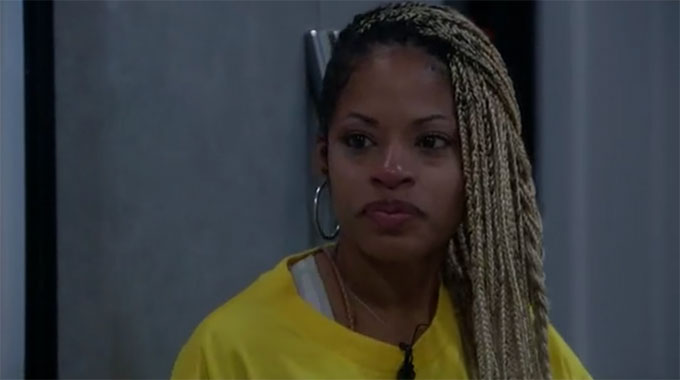 It didn’t feel much like a Big Brother 23 Eviction Eve Wednesday night, but it sure did feel like a Double Eviction Eve! The houseguests have a strong feeling that the double is upon them and they have been planning accordingly. The Cookout members know there’s that 1 in 6 chance that Alyssa could win HOH this week, so they’re also thinking about what they should do if that happens. So there were a lot of talks about what should happen this week, next week and beyond.

3:10 PM BBT – Claire tells Tiffany that she thinks she has Azah’s vote to stay and says that Big D told her he thinks Kyland is keeping her.

3:14 PM BB – Alyssa tells Kyland that it is pretty obvious that he and Tiffany are close since she put Claire up instead of him.

3:18 PM BBT – Xavier tells Hannah that even though he plans to not win HOH, he will win veto before he lets Alyssa win veto.

3:20 PM BBT – Hannah tells Xavier that she’s feeling confident that the HOH can be hers. She’s going to manifest it.

3:22 PM BBT – Xavier asks Hannah if she would nominate Alyssa and him. She says yep. He says he’d rather not see the block but knows others are considering him as well. Hannah says if he has any major objections she could do Kyland and Alyssa, but she doesn’t want to make Kyland angry.

3:24 PM BBT – Hannah says if she does him and Alyssa, hopefully that doesn’t make him come after her. She says Alyssa is his person, so it makes most sense. He says he did sit next to his person, and now he’s sitting next to someone else’s and then he has to sit next to his person again. He says but he gets it and isn’t overly objectionable to it. She says she really wants to make sure he can compete in veto too.

3:25 PM BBT – Hannah says if it’s him and Alyssa up and Alyssa wins veto, Kyland would go up and out.

4:45 PM BBT – Kyland actually tells Azah that it would be unrealistic to believe there’s a scenario where either of them would want to take the other to the final 2. But then he says he respects her as a person. Then he says he doesn’t even see why they would have a genuine final 3 discussion with Derek.

5:10 PM BBT – Azah cam talks that she feels like she’s in a good position with everyone in the Cookout but Hannah, really. Azah says her Number 1 is Derek. She says at the start of the game she expected it to be Tiffany but it didn’t play out like that.

5:22 PM BBT – Azah says that she loves Tiffany and knows that she has made mistakes in their relationship and that she has put people outside of the Cookout ahead of her and believed them over her and says that’s wrong. She says she does not want to touch her at all in this upcoming double eviction.

5:42 PM BBT – Tiffany tells Azah she was 90 percent honest with Claire this week, and she’s happy she was able to be that honest. She said only 90 percent because Claire asked if she was in an alliance with them and she said no. She said she did that to protect everyone else.

6:05 PM BBT – Tiffany asks Azah who she thinks is going to win this game. Azah says it’s between Tiffany, Kyland and Xavier. Azah says Tiffany wins sitting next to anyone. Tiffany says that’s why her odds of getting to the end are slim. She says Xavier is going to take her out as soon as he can.

6:18 PM BBT – Tiffany says that no one is looking at Xavier as a target. She says to Azah that she wouldn’t put him up, Kyland or Derek won’t. Hannah won’t. She asks why they are even playing and says they are just waiting until we get to the end to say congratulations, X. She says essentially the six is there to help X win the money. She says she could be wrong but thinks the rest of them doesn’t stand a chance against X.

6:25 PM BBT – Tiffany trying to set up an Xavier eviction in the double by telling Azah she has a better chance at beating Kyland at the end. She says if they keep Xavier over Kyland, they are signing the check for him.

6:28 PM BBT – Azah tells Tiffany she’d be happy with any of the Cookout women winning and happy with X winning because he has been loyal. But she says she has a hard time being OK with Kyland winning.

6:36 PM BBT – Azah says but first thing is getting them to six, and that’s what she wants more than anything.

6:37 PM BBT – Tiffany says she wants them to get to six more than anything, too, which is why Claire is on the block. Tiffany says if that didn’t prove her loyalty than nothing will. She says there’s no there way she can prove her loyalty like she did by putting Claire up. She says she doesn’t think Xavier would have done that with Alyssa if he was in her position this week. Azah agrees.

6:40 PM BBT – Tiffany says she was doubted all the way up until the meeting when she put Claire on the block. She says Kyland wouldn’t have done that with Sarah Beth either.

7:45 PM BBT – Azah tells Claire she hasn’t made up her mind yet about the vote. She says this vote has a deeper meaning to it so she has to think it over.

7:50 PM BBT – Claire suggests to Azah that this might be her only shot to get Xavier out. Azah doesn’t give her much else.

8:03 PM BBT – Claire tells Tiffany that sometimes she wants to gran Azah and shake her and remind her that this is Big Brother and that she’s playing for almost a million dollars.

8:16 PM BBT – Derek tells Hannah he’s nervous and doesn’t see how he can get to six. Hannah says but they’re sending Alyssa home after Claire. Derek says but if Alyssa wins HOH anything can happen.

8:20 PM BBT – Derek trying to convince Hannah that Kyland and Tiffany are more dangerous than Xavier. She says Xavier has a lot of respect from the jury. Derek says he knows if he sits next to X he can convince the jury to vote for him.

8:26 PM BBT – Xavier tells Tiffany that after the veto meeting, all his frustrations with her left. He says they are good. Xavier tells her that at six he is probably going to be looking at Kyland and Derek.

8:32 PM BBT – Tiffany cam talks that Xavier could be telling the truth, but she knows he doesn’t need her in this game and she knows she can’t beat him.

8:38 PM BBT – Hannah tells Tiffany that Xavier asked her what’s going on with Tiffany and Kyland. He says he’s noticed them getting closer and said Tiffany has been coming to get Kyland in the wee hours of the night.

8:42 PM BBT – Hannah tells Tiffany that Xavier only told her what she wanted to hear when he told her he would go after Kyland and Derek. Tiffany says yes, he wanted to relax her defenses.

8:45 PM BBT – Tiffany tells Hannah she doesn’t know what to do about Kyland and Xavier and suggests they might need to be 6th and 5th.

9:00 PM BBT – Hannah shares with Tiffany that her HOH plan next round would be to renom DF against Xavier if Alyssa comes down but she wants them to keep DF.

9:10 PM BBT – Tiffany plans to help Claire with her eviction speech to plant a seed against Xavier like DX did about Sarah.

9:45 PM BBT – Claire has been campaigning to Kyland for more than an hour.

10:15 PM BBT – HGs are preparing the feast for the end of HNs. Claire is still upstairs with Kyland.

10:30 PM BBT – Claire has realized she’s definitely getting evicted. She goes to Tiffany and cries. Claire asks Tiffany for help with her speech. Claire wants to call everyone out in her speech.

11:00 PM BBT – Claire and Tiffany have been working on her speech. She plans to tell HGs if they vote her out then she’ll vote for Xavier over each of them and will convince the Jury to do the same.

11:10 PM BBT – Tiffany camtalks that this season has been so hard because the Six have had to put aside their gameplay to instead achieve this other mission. She hates seeing Claire fighting while knowing Claire doesn’t have a chance.

11:20 PM BBT – Tiffany continues camtalking that she has much respect for Xavier but can’t give him loyalty inside the house because it could cost her the game. She thinks she may be the only one to challenge Xavier’s win so she thinks she’s playing a good game too. Tiffany is frustrated that Hannah seems to want to take out DF before X.

11:45 PM BBT – Azah is hiding between the bed and the wall with paper, possibly studying.

1:30 AM BBT – Kyland and Tiffany are upstairs in the HOH room, lights out, and chatting. Tiffany feels bad about Claire working so hard to stay but having no chance. Kyland promises he’s never spoken against the Six.

1:40 AM BBT – Kyland does not plan to fight hard for the HOH. He will try to stay in until Alyssa is out though. He hopes Hannah wins it instead.

1:45 AM BBT – Claire tells Hannah that Kyland let her know he isn’t voting to keep her. Hannah acts surprised. Claire says she needs to make sure she gets DF and Azah’s votes.

2:05 AM BBT – Claire warns Hannah that she has to get Xavier out. Hannah says if she gets HOH then either Alyssa or Xavier will be out the door.

2:10 AM BBT – Azah explains to DF that she can not put up another Black woman. DF suggests Azah wants Kyland out while Tiffany wants Xavier out. He doesn’t think anyone is targeting Azah or Hannah.

2:30 AM BBT – DF tells Azah he’d nominate women because he can’t beat them at the end.

3:00 AM BBT – Hannah and Azah are still up chatting in the bathroom. Other HGs are asleep.

Claire put in the good fight but it’s obviously not going to happen. The real action on Thursday night will be the second eviction of the Double when we’ll see if the Cookout completes their mission or if Alyssa uses up another of her nine lives.