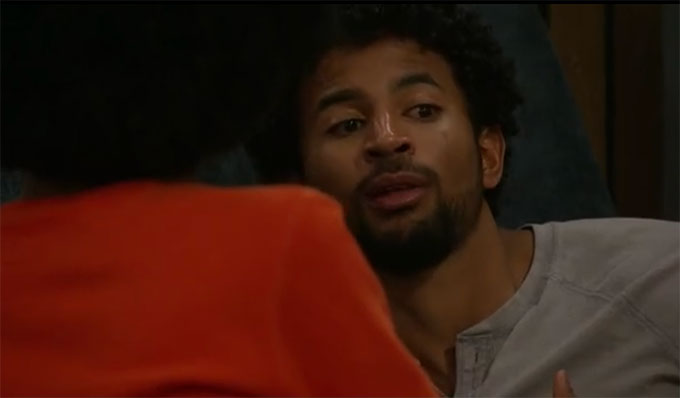 There might be a new Head of Household in the Big Brother 23 house, but for now, it’s still the Frenchie show. He once again found himself at the center of everything today after the nomination ceremony. Read on to find out how Frenchie and Britini reacted to being Kyland’s nominees and what people are feeling as who the target could and should be.

6:35 PM BBT – Feeds return from the nomination ceremony. Britini is crying. “That speech is pretty convincing that I am [going to be evicted],” she said.

6:37 PM BBT – Azah is crying also. Seems she’s upset or pretending to be for her team. Kyland nominated Britini and Frenchie. Britini and Frenchie discuss the nominations. Frenchie tells her to lay low and that this is on him, not her. Frenchie says he is going to blow show sh*t up. Let me be the one to go home.”

6:40 PM BBT – Derek F wants to know why Kyland took two shots at their team. Frenchie says it’s OK, let the target stay on his back, at least he gets to see his family.

6:43 PM BBT – Tiffany tells Kyland that she thinks he made the best move. She says it made a lot of sense, especially with the speech he gave.

6:46 PM BBT – Frenchie tells Britini there is going to be fireworks this week. He says she can just sit there and watch the show because he is going to go out with a bang.

6:52 PM BBT – Tiffany tells Kyland she believes their two teams and Derek X should work together, and said they could pull in Hannah. Claire says Hannah might be loyal to Whitney though. Tiffany says eight is a good number so they don’t even have to include Hannah.

6:53 PM BBT – Kyland says everyone in the house told him they’re concerned about Frenchie except Britini. Tiffany says that says a lot.

6:54 PM BBT – Tiffany says if Frenchie comes off the block he knows what to do. He says yeah. Kyland is worried he upset Derek F and Azah. Tiffany assures him that Azah is not Team Frenchie.

7:10 PM BBT – Kyland asks Frenchie if he brings the group together and asks if they can squash all this and move forward together, would that be something Frenchie is down for. Frenchie says absolutely.

7:19 PM BBT – Frenchie tells Derek F that the best case scenario now is America sees his intentions and gives him some kind of power.

7:20 PM BBT – Derek F isn’t too into the idea of the alliance meeting since Frenchie told him Kyland didn’t say he had a backdoor plan. DF says he doesn’t want to be a part of the alliance if Derek X isn’t going home this week.

7:21 PM BBT – DF tells Frenchie that he needs him in the game. Frenchie says he’s not rolling over and mentions that Dan Gheesling didn’t give up either.

7:23 PM BBT – Frenchie says if he leaves this season is going to get really boring really fast. Derek F agrees and says he can’t do all the work. He says he can’t be entertaining and keep everyone together.

7:40 PM BBT – Whitney tells Kyland that the alliance is behind him and so if Britini targets him they will have his back.

7:45 PM BBT – Kyland tells some of the Slaughterhouse group that he wants to get everyone together even Frenchie. He says maybe that group really is the best move for them in the game.

7:55 PM BBT – Britini and Kyland are finally talking. He tells her that he hopes his speech made it clear that this was nothing personal. He tells her he could only go off what people told him and everyone but her told him they had concerns about Frenchie.

8:04 PM BBT – Kyland and Britini are still talking. She tells him she knows he knows what it feels like to sit on the block but it still really hurts her. He says he’s sorry. Kyland tells Britini that she is still someone he would rather work with than against. She says likewise. Kyland tells her he doesn’t see any reason why she wouldn’t be here next week.

8:08 PM BBT – Britini asks Kyland who goes up if she comes down. He tells her that he hasn’t thought of that yet because that’s how you go crazy. He says his brain capacity can’t handle that.

8:25 PM BBT – Kyland and Derek F finally catch up. DF tells Kyland he gets why he did what he did, but was surprised that Britini was up. DF asks if they’re voting out Frenchie or what. Kyland says everyone in the house but Britini has expressed concerns with Frenchie.

8:30 PM BBT – Derek F tells Kyland that if they keep Frenchie around he can go after the people not in the Cookout Alliance (HUH?). DF again pushes for Derek X to go. He says he wants DX gone so badly.

9:00 PM BBT – Azah asks if Frenchie or Britini win veto is he staying with that team for a target, asking if she would go up. Kyland says no, he would not put her or Derek F up. He says if for whatever reason anyone mentions her name or Derek F’s name he says that is not something he would do unless one of them thought it was the best option.

9:05 PM BBT – Kyland tells Azah he has no plan right now who a replacement nominee would be. He says he doesn’t plan on coming up with a name unless he has to.

9:12 PM BBT – Brent is irritated with Frenchie. He says people are thinking he (Brent) is the mastermind even though Frenchie was the HOH.

9:30 PM BBT – DF says he’s going to fight to win the Veto so he doesn’t have two teammates on the Block. Frenchie says to get Britini off the block, not him. DF tells Frenchie to save himself with the Veto if he gets it. Frenchie says this same thing will just happen again next week if he does.

9:35 PM BBT – Brent laments to Xavier how Frenchie messed up their potentially perfect spot in the house then he acts surprised that it’s all falling down around them.

9:40 PM BBT – Brent and Xavier agree that Frenchie won’t get any votes to stay from them.

9:45 PM BBT – Britini tells Frenchie that someone has been telling HGs that she started an all-girls alliance… (Frenchie did that.)

10:00 PM BBT – Frenchie reveals to Britini, Claire, and Tiffany that he created the Slaughterhouse alliance and who is in it.

10:15 PM BBT – Brent asks Sarah if Frenchie asked her to throw the WC comp to him. She says that’s true. They note how Frenchie is now claiming to HGs that he threw it to her instead. They agree that even if Frenchie manages to stay this week then he’s going out the next week instead.

10:20 PM BBT – Hannah notes how often Frenchie is going around talking directly to the cameras.

10:35 PM BBT – Brent, Hannah, Alyssa, and Sarah discussing Frenchie’s messy game and how he thinks of himself as a villain but he’s not a good player.

10:40 PM BBT – Frenchie and Britini ask viewers to come through for them with a special power this week to save them. Frenchie tells Britini not to trust Whitney.

11:05 PM BBT – Frenchie lets Xavier know that he revealed the Slaughterhouse to everyone but downplayed Xavier’s and DF’s involvement.

11:10 PM BBT – DX and Azah discuss nominating Brent and Whitney together if they get HOH. They worry that DX could be the renom target this week if either nom comes down. Azah warns DX that his own teammates, Brent and Whitney, were in the middle of that big alliance and were working against him.

11:40 PM BBT – Frenchie warns Sarah to watch out for the Slaughterhouse alliance because it could take her out.

12:00 AM BBT – HGs are celebrating Alyssa’s birthday in the storage room with a cake.

12:10 AM BBT – Sarah and Britini share a pinky swear that Sarah’s team will throw HOH to Britini because it’s B’s brother’s birthday. Huhwhat?

12:30 AM BBT – Tiffany talks with Claire and Kyland. Tiffany doesn’t believe DF that he was surprised about the Slaughterhouse.

12:50 AM BBT – Christian and Alyssa apologize to DX for believing the misinformation that Frenchie told them.

1:20 AM BBT – Frenchie claims to Azah that if he gets the Veto he won’t tell anyone that his plan is to use it on Britini.

1:25 AM BBT – Frenchie says he quit trying during the WC comp because he thought the twist/prize would be lame…

1:40 AM BBT – Frenchie tells Azah that he had a big master plan that if one of the women had won HOH he was going to reveal info to them. He promises Azah that he kept her in the dark because he cared about her.

1:55 AM BBT – Frenchie says he made the girls alliance because he didn’t feel comfortable in the Slaughterhouse alliance he had already made.

2:00 AM BBT – Frenchie now claims he blew up their game to help Azah. He says he accomplished what he wanted but hurt his game in the process.

2:05 AM BBT – Frenchie tells Azah he’s prior military. She reminds him he told her that on the first day.

2:20 AM BBT – Frenchie is sure he could stay this week if he wanted, but he doesn’t want to do that to Britini.

2:40 AM BBT – Tiffany, Sarah, and Claire all agree that Frenchie is toxic to the game. They also note how smooth Brent is playing and his potential danger in the game.

Well that was fun. Frenchie is giving us a lot of entertainment and we’d do well to keep him around for more, but at the rate he’s going this is likely the end of the road for him. Veto is a powerful thing though so let’s see where Saturday’s Veto comp takes us for BB23.