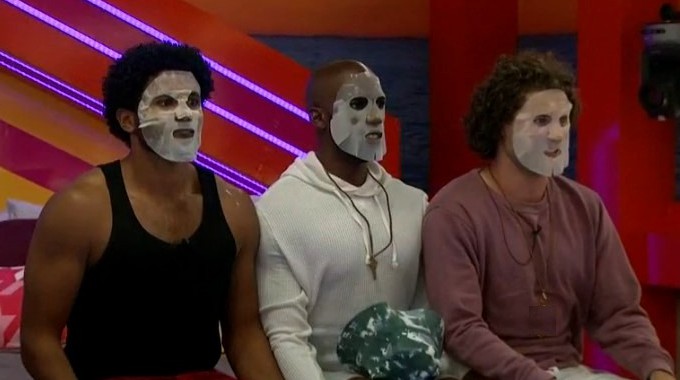 The Big Brother 23 Houseguests faced Veto Day on Saturday with plenty of game talk and plotting on their next vote and moves beyond. It was the return of Bowlerina from what the HGs discussed and the Veto has settled the HOH’s plans for the next eviction. That vote might not be such a surprise to the target as some of the Houseguests believe.

10:25 AM BBT – Brent talks to Xavier about the numbers advantage they have with the Radicals and not to give that up.

10:40 AM BBT – DF talks with Xavier and explains that Azah is upset because she feels if Britini goes home then it’s just down to her (A) and him (DF).

10:55 AM BBT – Britini is upset. Someone has been hanging the toilet paper roll backward. She goes around showing HGs the paper needs to roll forward over the top.

11:00 AM BBT – Azah and Xavier speak in the HOH room. They agree they have the same goal of getting the Cookout to the end.

11:05 AM BBT – Claire lets Xavier know she continues to pretend to Brent like he has her support. She thinks the Veto picks went well for their plan.

11:30 AM BBT – Xavier checks in with Tiffany and lets her know Brent still feels like he has the votes to stay.

12:20 PM BBT – Hannah is in to talk with Xavier. She’s reporting back the things Brent has been saying about Xavier and how he’s upset with Azah and the way Xavier seems to be favoring her (A).

1:00 PM BBT – Azah tells DF that her target would be Whitney next week.

1:10 PM BBT – Brent talks with DF and Azah about his nomination. He says he didn’t agree to go along with being a nom and Xavier did it anyway.

1:50 PM BBT – Brent tells Alyssa and Hannah that he convinced DF and Azah that he’s not working with Xavier.

5:40 PM BBT – Feeds are back. Christian is wearing the medallion.

5:45 PM BBT – Christian and Britini are doing a victory dance in the storage room.

6:05 PM BBT – HGs discussing throwing up and the spinning. Sounds like Bowlerina.

6:10 PM BBT – Britini announces that Xavier has made her look bad and he should apologize and have the Veto used on her.

6:30 PM BBT – Christian and Xavier discuss that Christian can announce at the Veto meeting that he trusts his teammate’s decision and will not use the Veto.

6:50 PM BBT – Sarah, Britini, and Azah agree that they want Whitney gone before Jury because she’s too emotional.

7:15 PM BBT – Sarah talks with Alyssa and Christian. Sarah suggests DF would be best to go during a DE because he’d cause drama if he’s on the Block for a long time.

7:30 PM BBT – Christian and Alyssa want Whitney gone next week and think Hannah or Azah should be the pawn next to her. They share this idea with Xavier.

8:45 PM BBT – DX, Alyssa, and Sarah feel guilty about cheering against Brent in the Veto comp. They agree they need to lie to Brent until the end of his stay.

9:25 PM BBT – DX, Hannah, and Whitney discuss how to handle Brent’s eviction. They don’t want to be hurtful but also know it’d be more peaceful if they didn’t tell him in advance.

9:45 PM BBT – Brent checks in with Alyssa and says no one will suspect their F2 alliance.

10:10 PM BBT – DX questions Hannah if it was really a smart move for them to target one of their own teammates so early in the game. Hannah is fine with it because she doesn’t like Brent.

11:45 PM BBT – Claire and Tiffany meet up in the storage room. Claire shares how DX and Hannah seem to be working closely together but isn’t sure if they’re a F2.

12:20 AM BBT – Brent tells Alyssa not to share, but he thinks this is his last week in the house. She acts surprised and asks why. He says he doesn’t believe Xavier wants to make their alliance work. Brent asks her not to say anything.

12:45 AM BBT – Tiffany and Xavier discuss how emotionally Azah plays the game. Tiffany is frustrated with her and says she won’t talk game with her anymore but will stay friendly.

12:55 AM BBT – Hannah discusses why they need to break up Christian and Alyssa before Jury. She thinks they’ll vote together at the end no matter what.

1:30 AM BBT – Tiffany assures Britini there’s no plan to get her out this week and if there were she would not support it.

1:35 AM BBT – Sarah tells Claire she wants Hannah out after Brent and not Britini next.

2:10 AM BBT – Azah, DF, and Britini talking in their bedroom. DF says no one is expecting them so next week is the right time to make a move. Derek is frustrated that they’re getting picked on.

2:50 AM BBT – Tiffany warns Claire that Whitney is too good at getting close to the guys.

3:20 AM BBBT – Kyland tells Claire and Tiffany that from his talk with DX it sounds like the house could be planning to go against the Kings team. Kyland worries that if the Jokers team wins HOH then they’ll go after him (K) and DX.

3:30 AM BBT – Kyland, Tiffany, and Claire decide they will not tell Brent before his eviction.

Brent seems to know he’s the likely target and his game is wrapping up so is he downplaying that to keep others from joining the bandwagon? It’s really too late for that now as it’s going to be an overwhelming vote against him. Maybe we’ll see some campaigning from Brent over the next few days, but it won’t move the needle this week.