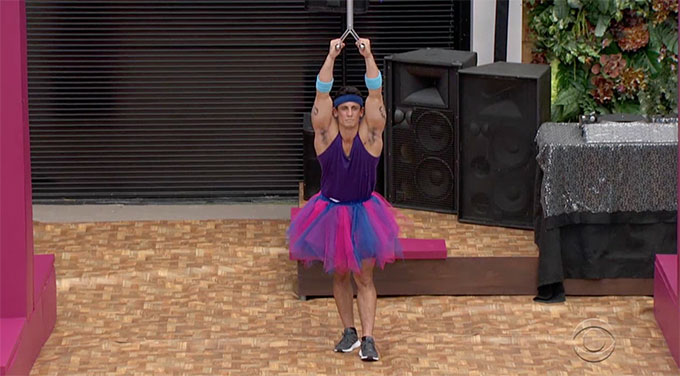 Wednesday night’s episode of Big Brother 23 was one big joke on flight attendant Brent. From him falling down during the veto competition, to him thinking he has the numbers and is about to pull off the biggest blindside in the show’s history, it was all very laughable. If I hadn’t spent the past 22 seasons detesting that casting archetype, I might actually feel sorry for Brent. But I don’t. That was all very funny.

The episode picks up right after the nomination ceremony. And once again Britini is extremely overreacting to being on the block. As for Brent, he says you just can’t use a guy like him as a pawn.

Xavier lets Britini know that there’s a bigger plan. He tells her that the entire house (minus Brent) knows she’s not the target. But she really wants her TV time, so she’s not ready to understand the plan.

And that’s true. Even Brent’s team knows that he’s the target and are ready for him to go home this week.

But wait a minute. Brent does seem to think he’s the target. And he tells Xavier he’s not dumb and is actually very, very smart. But he thinks he has the numbers to stay. He really think he has his team’s loyalty and claims that “Xavier made a catastrophic mistake.”

Meanwhile, Azah is pretty upset that Britini is on the block again and she’s even more upset that Tiffany and Derek X knocked Britini out of the Wildcard Competition.

Azah decides to go talk to Tiffany about that game and they conclude that they’re both playing very different games. Azah is playing emotionally and Tiffany is playing logically, so they’re starting to butt heads. But all the members of the Cookout alliance really want to group to make it work, so I don’t expect those two to go after each other, but they’re definitely not best friends at the moment.

Let’s find out who is playing in this week’s veto competition. Joining Xaiver, Brent and Britini are Christian via Xavier’s HG choice, Derek F and Whitney. 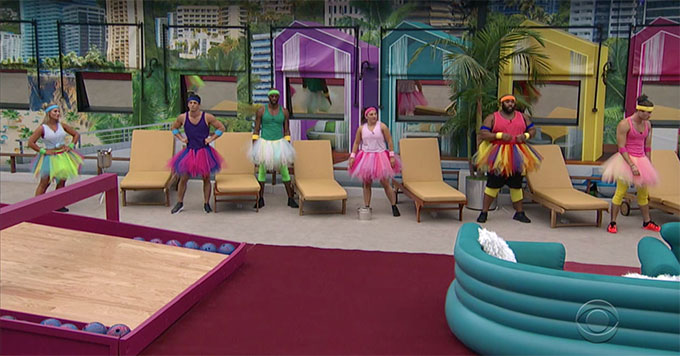 Now it’s time to get the the competition. It’s that one where they have to spin and get dizzy and try to knock down some blowing bins. While wearing tutus. That last part I’ve never understood.

And since this competition is played in rounds, first up is Britini vs. Brent. Britini is the first out and Brent remains in the game.

For round 2 it’s Xavier vs. Brent. And since Xavier picked Brent to challenge, Brent is definitely sure he’s Xavier’s target. And Xavier knocks Brent out.

Round 3 is Derek F vs Whitney. Derek wins that round, knocking Whitney out.

Christian and Derek F face off in Round 4 and Christian wins the round, knocking out Derek F.

So the final round is Xavier vs. Christian. And Christian wins the round and the Power of Veto.

But will Christian use the veto? Of course not, but Brent thinks it will be used, so he comes up with a plan to tell everyone to pretend they’re going to vote him out so the veto doesn’t get used. He thinks that Britini staying on the block against him means he will be safe.

So in other words, Brent came up with the plan that everyone is already working on, only they will vote him out and not Britini. 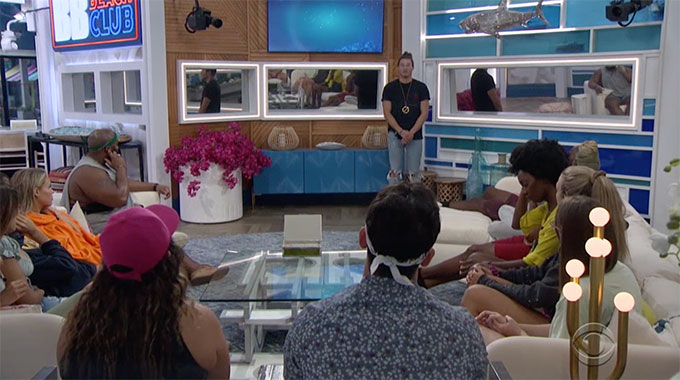 Needless to say, Christian does not use the Power of Veto, and Brent thinks he made that not happen. He’s going to be surprised Thursday night unless someone tells him otherwise.