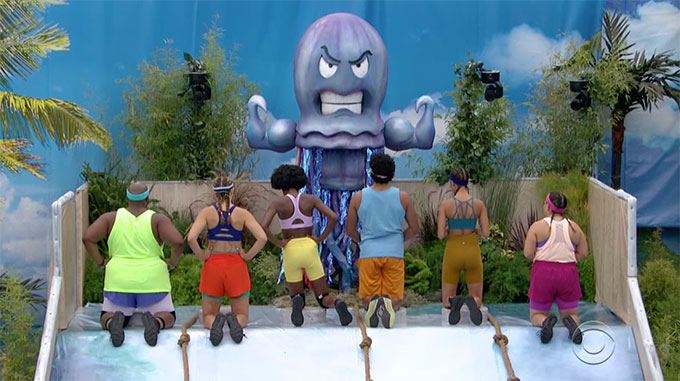 OTEV made his return in Wednesday night’s episode of Big Brother 23, and brought along two golden Powers of Veto, thanks to the High Rollers’ Room twist.

The episode picked up right after the Veto Derby results. Kyland let’s the houseguests know the four players who placed in the derby will get to place their bets after the veto draw.

And since there could be two vetos in play this week, Kyland is still keeping his target options open. He tells Derek F that he has Claire, Alyssa and Britini as target possibilities this week even though he made a deal with Britini.

Tiffany catches up with Kyland, and he lets her know that Claire is his target because she told him her targets would be a Joker (Derek F, Azah, Britini) or Xavier. Tiffany tells Kyland that she can take care of Claire and keep her sights off the Cookout.

So just like that Kyland narrows his targets down to Alyssa and Britini.

But let’s pause just a minute. If you only watch the episodes, then you’re not getting the full story here. Tiffany’s little suggestion was not the reason Britini is now in Kyland’s crosshairs. Most of the house thinks she won 100 BB Bucks (which she did), and think she could get 100 more, and have a shot at winning the next power, which will greatly disrupt the game. So that, and her targeting Kyland and Sarah Beth in the HOH competition, are the main factors in her becoming a target this week.

Let’s find out who is going to play in this veto. At the veto draw, we find out joining Kyland, Derek F and Claire are Alyssa, Azah and Britini via Derek F’s houseguest choice. All three former Jokers are in the competition. 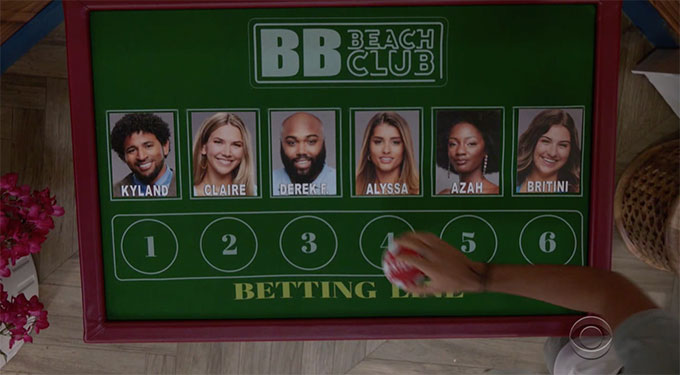 And it’s time for the Power of Veto. And it’s OTEV! And Derek F is the first one out. Azah decides to throw the competition to Britini so Azah is out second.

Britini is out next, followed by Claire. It comes down to Kyland and Alyssa. And It sounds like Kyland is going to throw it to Alyssa so that he can get the veto and not Claire. And it’s very obvious Kyland is throwing it.

So Alyssa wins the Power of Veto and Kyland wins the spare veto. And lets Sarah Beth and Derek F know that he’s probably going to save Claire and put Britini on the block. Derek F doesn’t like that idea, since he and Azah both think the Jokers are still a thing. So DF pushes for Kyland to go after Derek X. And Kyland sees that he is a threat, but would be really go after DX? Let’s get to the veto competition and find out. 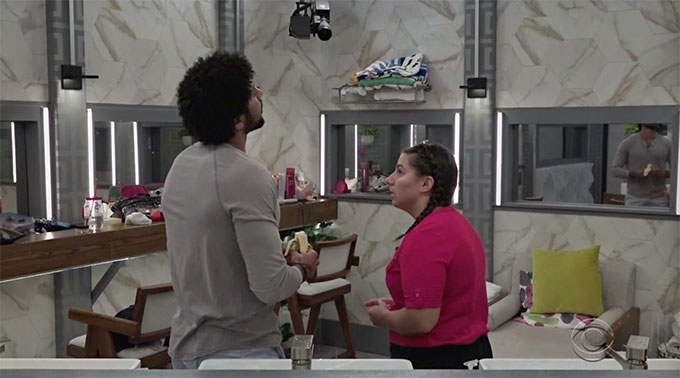 But first, Sarah Beth lets Britini know that she might be going up. And Britini freaks out and goes to talk to Kyland. And Britini tugs at Kyland’s heartstrings, so we get another cliffhanger.

Can’t wait until Wednesday night to find out who Kyland decided to put up as a replacement nominee, check out our Big Big Brother 23 Week 6 Veto Ceremony spoilers.